Afraid of ‘Afro-American’ teens? Then Rock Springs Apartments is the place for you!

Leon casino, Our inbox is regularly bombarded with notifications of every happening in this city from every rapper’s new release to heartwarming stories of how Shell donated 18 bux to a kid’s college fund. We are more than desensitized to the absurd and ridiculous coming through every morning. But I got something today that would be comical had it not been true: Rock Springs Apartments at 9000 Town Center Park has sent out letters to all of its residents to report the presence of ” any teenagers or adolescents of the Afro-American race or other suspicious people on the property.” I would have believed this to be some ridiculous claim had the email not included a copy of the letter. The email also claimed that resident Monica Rodriguez has been served a letter stating she must vacate her rental unit ( which was also attached in the email ) as a result of complaining about the overtly racist letter.  Upon calling Rock Springs Apartment I was told that the warning about Afro-American teens was indeed published by the property managers yet was refused information as to why this warning had been made and by whom. I asked the employee whether or not she was of afraid of black teens, whether I should be, and whether the long awaited race war would start at this unassuming apartment complex off of Gessner. Either way, if you are looking for a discerning property that goes above and beyond to keep pesky black teens away, this just may be the right place for you. Give them a call today! 713-776-2385 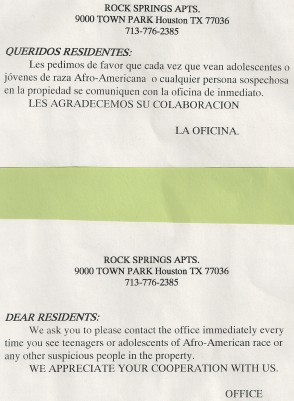 Who are these 'Afro-Americans'? How big are their Afros? 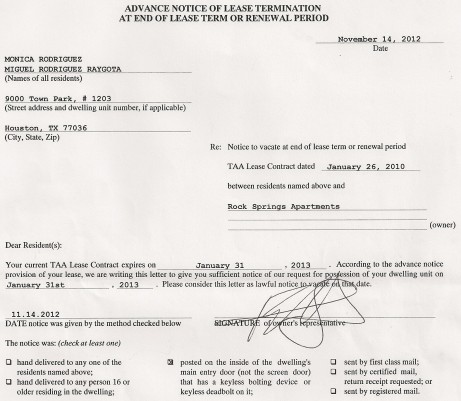 She may have until January 31 to find a new place but it is gonna be hard to find another quality, hate-mongering apartment complex that caters to the bigot within all of us.

What Embarrassing Things Have Our Texas Representatives Done Lately?