What are the movies on about? By the time you read this Jurassic World will be tapping on the hull of Titanic’s number two domestic grossing film status. And what’s good for wide release big budget films translates into happiness for small budget fare, studio, specialty and indie.

I know that’s like saying what’s good for the goose is good for the gander since they are both geese. You pay the same amount of coin to sample a film playing on three screens in North America as you do for a film released on 3737 screens. 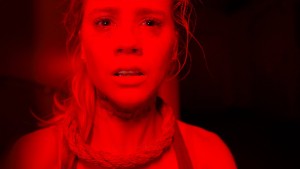 This weekend gives a handful of small genre films a chance to catch some of the moviegoers’ love and money. In every case these films were made for a pittance, certainly the case of The Gallows, a Warner Bros. release that was made for a couple of million. The Gallows was originally set for release from another company three years ago, and picked up by WB arm New Line late last year. The truth be told, with its found-footage format and claustrophobic setting The Gallows provides some chilling and scary moments. Your humble scribe never about screamed out loud but at one moment about 60 people in the audience did. That’s a real filmic experience you can’t duplicate at home. Can you fit 60 people on your couch and in front of your smart television? 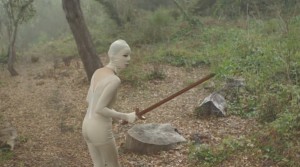 Felt is like a John Hughes film directed by Gasper Noé. There are deep wound psychological themes being played out by teens. We start off in high school mode only to have the veneer of sexual normalcy quickly stripped away layer by layer. Amy has a trauma that she deals with by creating different characters, complete with weird full body costumes, both male and female.

Amy slowly draws fellow classmates into her world, first by talking, then by getting them to share in the role modeling. A violent ending while not a foregone conclusion fits puzzle piece like into the bizarre narrative created by director/writer Jason Banker. Felt’s star and co-author Amy Everson based the story on actual events in her life. Felt opens exclusively at the Alamo Drafthouse Vintage Park (10:30 pm. daily) this weekend.

Two documentaries reflect life with shaky hand held video camera realism. Fans of Amy Winehouse will obviously embrace a film about the singer that features personally shot footage and unheard tracks. More disciplined cineastes will roll their finger on the armrest waiting the inevitable shot of Winehouse being wheeled out of her pad in a body bag. 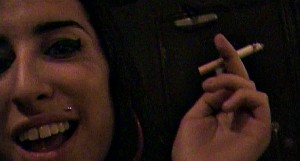 Amy features the mundane like shots of Amy traveling in the back seat, clowning for the camera, or moving into her first apartment. There are also candid behind the scenes moments between people around her exuding bad influence: boyfriends and her father alike. This is balanced by a sequence of, say, Tony Bennett talking about how much he enjoys recording with Amy. Most of the footage is low res, which only adds to the feeling that you’re witnessing something very personal.

The Wolfpack reveals the life of seven children (with the focus on four of the six brothers) of the Angulo family who were homeschooled and never allowed to leave their Lower Manhattan apartment. Home video footage shows that the brothers played out their fantasies by dressing up and acting out parts from films like Pulp Fiction, The Dark Knight, and Casablanca. They have the costumes and dialogue down pat, creating the sets in one of the rooms of the four-bedroom apartment. They play the videos of the movie over and over writing down the dialogue.

One day Mukunda (then 15) manages to leave the apartment while the father is out shopping. Mukunda is wearing a horror style hockey mask, wandering down the street, going into stores, and freaking people out in general. Mukunda promptly gets arrested and a subsequent psychological examination leads investigators back to the apartment. Here is where the dynamic of the Angulo family changes.

The filmmakers came in around this point and shot additional footage. The Wolfpack moves back and forth between the existing video footage and the brothers going out in public and doing totally normal things, like walking in the park or seeing the ocean, for the first time. The Wolfpack poignantly ends with the brothers creating their own avant-garde movie with a clever set that wouldn’t be out of place in a silent film, elaborate tracking devices and high res camera. The Wolfpack opens exclusively at the Sundance Cinemas Houston.

Also at the Sundance, Aloft gets a four-wall engagement. Sometimes directors don’t hold the audience’s hand while the plot unfurls. The less explaining the more compact the surprise at the end when the filmmaker finally reveals all the cards in the deck. So it goes with Aloft, which starts with a strange sequence depicting a healer, a remote rural location and a falcon.

Fast forward 20 or so years and the same characters are shown on separate timelines, some in the past, some in the now, headed towards a fateful meeting that ties the proverbial ribbon into a bow. Cillian Murphy, Jennifer Connelly, Oona Chaplin and Mélanie Laurent star. Aloft just plods on in a cold environment that reflects the characters’ state of mind. Despite some interesting parallels in the relationship of man to bird and people to other people Aloft was too aloof to make a connection.