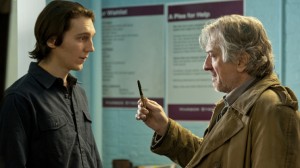 In Being Flynn the apple doesn’t fall far away from the tree. Paul Dano plays Jonathan Flynn a struggling writer who’s never known his father. No sooner has Dano taken a job at a New York City homeless shelter than his Dad shows up. As played by Robert De Niro the elder Flynn at once jolts the audience into the recognition of what would happen to an everyday person who goes a little bit crazy through a series of hopeless situations.

Leon casino, Dano and De Niro bounce off each other, their respective eccentric character tics giving Being Flynn an edge over similar dysfunctional family stories. De Niro himself seems at the top of his game. This isn’t a paycheck roll so much as a return to the De Niro of old. His occasional rages are understandable yet we also feel that Dano, who’s much more subdued a person, is also ready to burst.

Being Flynn was adapted from the book Another Bullshit Night in Suck City by writer and current University of Houston professor Nick Flynn. Julianne Moore, Lili Taylor and Wes Studi co-star under the direction of Paul Weitz. Olivia Thirlby plays a love interest of Dano, and herself plays a sexy and calm counterpoint to Dano’s more hyper lad.

A movie that sometimes takes a circular path to achieve its end, Being Flynn combines gritty settings and superb acting on its way to becoming a memorable movie.

Flowing With the Environment of the TurnUp | Day For Night Artist Profile: Josiah Gabriel

Stand Up & Deliver: Finally Getting A Krispy Kreme