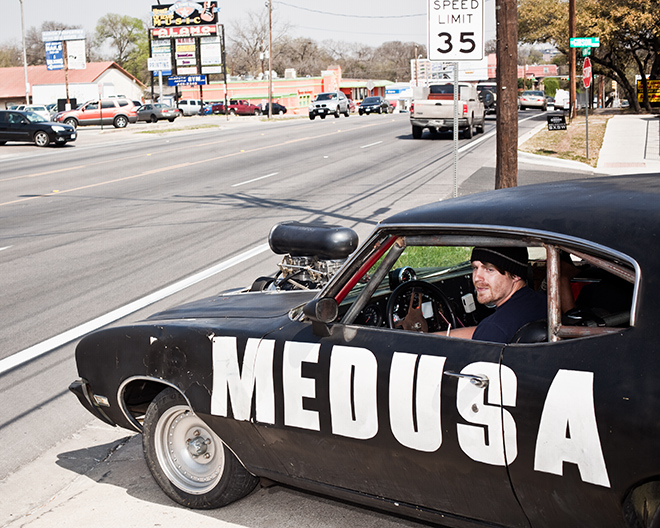 Bellflower starts as a buddy movie about guys who like flamethrowers and monster cars but evolves into a romance with a sharp edge. Director Evan Glodell emerges as a kind of triple threat writing and directing and starring in Bellflower. Glodell originally wrote the script in 2003 and then spent years raising the money to make the film.

Bellflower played at the 2011 Sundance Film Festival followed by a slot at SXSW. Subsequently Oscilloscope Laboratories picked up Bellflower for theatrical distribution.

Free Press Houston spoke to Glodell by phone about Bellflower and he wasn’t bashful to admit “I didn’t know much about the film world, even after developing the film for years. With Sundance I was so nervous.” Glodell described SXSW as “a crazy time.”

Glodell studied engineering in college and his technical expertise is apparent in the mechanics of Bellflower. The film required a flamethrower that Glodell built as well as a tricked out car, a rebuilt motorcycle and even a modification to his camera’s image plane that enabled Glodell to use widescreen lenses. The latter alteration gives Bellflower a true cinematic look that belies its small budget.

“I’ve always collected strange objects,” mused Glodell explaining how he likes to build things. Regarding the flamethrower: “I looked online at surplus flamethrowers but they weren’t safe or cheap. Mechanically I just needed a pressurized tank of fuel. So I went to Home Depot and spent a few hours shopping for pipe fittings with a stop in the stove and BBQ section.” For another sequence where Glodell’s character and his girlfriend drive to Texas, he rebuilt a 1969 Honda CL 350. But the most striking character in Bellflower, and Medusa is a character, is a 1972 Buick Skylark Glodell custom built as a fire-breathing dragon of a racecar. 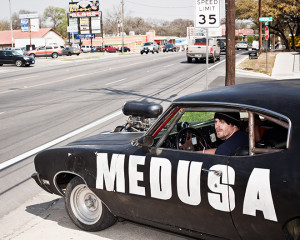 “It’s a big car under the hood,” Glodell assured. “At times it was a nightmare, we’d literally be up all night welding and painting, getting Medusa ready for the next day’s shoot.”

Bellflower opens in Houston this weekend exclusively at the Studio 30.