According to the Academy of Motion Picture Arts & Sciences there are 323 films this year eligible for awards consideration. Throw in another hundred or so independent off-the-grid film and easily there are 400 films that a person could experience in 2014.

So should a top ten list include about 40 films? That’s ten percent of the total number of films. And certainly, a lot of good films came out this year and I could probably come up with at least a few dozen titles worthy of further introspection.

But a top ten is a top ten and that means no baker’s dozen for this engaging inventory.

Magic in the Moonlight

About right now you are probably saying what about Boyhood, or The Theory of Everything, or The Gambler, or Foxcatcher, or Unbroken, or Wild, or A Most Violent Year, or The Grand Budapest Hotel, or American Sniper, Selma and Gone Girl? Hell, throw Interstellar on the list. All of the above films are above board. Many are called, few are chosen. How about a few fun films that flew in below the radar like half-live action half-animated The Congress, the truly scary The Babadook, the offbeat comedy Frank, or the impressive neo noir Blue Ruin?

In the last week I have met so many people who never go to movie theaters who told me how much they wanted to watch The Interview, the now infamous movie, which no one except Alan Cerny has seen, just because it was a cause célèbre du jour. Any movie that has people talking about cinema I am one-hundred percent behind.

Whiplash is the little film that could. This indie film was the opening film of the 2014 Sundance Film Festival and has played in limited venues around town in the last couple of months. Miles Teller plays a jazz drummer in a music conservatory torn between his desire to be the best drummer ever and his fear of his abusive instructor, expertly realized by J. K. Simmons.

Nightcrawler stars Jake Gyllenhaal as a freelance videographer who drives around nocturnal Los Angeles crime scenes. Not unlike Weegee from the ‘30s/’40s Gyllenhaal isn’t above rearranging accident victims so that his videos have integral symmetry. Writer/director Dan Gilroy also casts his wife Rene Russo as a television news director who is almost as ruthless as Gyllenhaal. 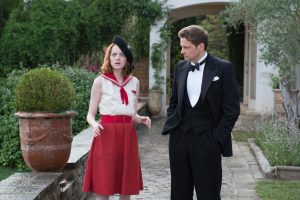 I don’t live in a world where Woody Allen films aren’t major cinematic events. Magic in the Moonlight pits Emma Stone and Colin Firth as rivals in the art of illusion. Allen probes the struggles of Firth and his sense of agnostic belief in the face of unexplained, and possibly religiously inspired, events. At all times Magic in the Moonlight is a breezy comedy and while questions of doctrine occupy some of the running time romance is never far behind.

Blood Ties played for a solid week at one obscure theater but I have never gotten this film out of my mind since. An English language film from French helmer Guillaume Canet (Tell No One) Blood Ties examines the relation between two brothers: one a cop the other a criminal. Vintage 1970s settings evoke the atmosphere of Sidney Lumet films. The cast includes Clive Owen, Billy Crudup, Marion Cotillard, Mila Kunis, Zoe Saldana, Matthias Schoenaerts and James Caan.

Tusk is a movie about storytelling. We hear many tales throughout the movie, even as genres mix and mash. At times the action is a comic send-up of internet bloggers and at other times the setting is downright horrific. Writer/director Kevin Smith hit the ball out of the park with Tusk. The story is anchored by an incredible performance from Michael Parks, as well as an uncredited performance from a heavily disguised Johnny Depp. Justin Long headlines and the “kid who see dead people,” Haley Joel Osment, is now fully grown.

Top Five hilariously lampoons the current media culture. Chris Rock writes/directs/stars. Rock and Rosario Dawson walk around NYC, she a NY Times reporter and he obsessed with the opening of his new movie. Rock plays a player who became an Eddie Murphy level star in a series of ham-fisted action films. Only his new film is a serious drama about a slave rebellion in Haiti. He tells reporters at a press junket that the rebellion killed 50,000 white people “but we only kill about two or three thousand on screen.” Take Five is the funniest film of the year.

Guardians of the Galaxy introduces Rocket Raccoon, a truly grumpy yet charismatic character who carries a big stick and has a natural mask. Rocket is part of an ensemble that includes Groot a plant based life form, Drax a kind of muscle man, Gamora (Zoe Saldana) a green skinned femme fatale with martial arts skills, and Peter Quill (Chris Pratt) an Earthling who was kidnapped by aliens from his home planet in the 1980s and who fancies himself a mercenary named Starlord. Direction is by James Gunn who previous feature length films were distinguished by their no-holds-barred indie chutzpah, particularly the brilliant super hero black comedy merely titled Super. Gunn steps up to the Hollywood standard of adhering to a PG-13 sensibility while stuffing the content with innuendo and subtle references to nostalgia.