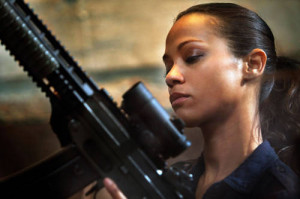 Colombiana comes from the mind of Luc Besson and while in his heyday the dude could knock out La Femme Nikita, Colombiana is no femme Nikita. Besson writes and produces and the director is Olivier Megaton. His last name should tell you all you need to know about the subtlety of Colombiana.

Sometimes these larger than life, impossible in the realm of physics action thriller work, sometimes not. Some recent examples of the sub-genre would include Hanna (which I liked) and Fast Five (nix on that). But Colombiana bears more resemblance to the Transporter series and Zoe Saldana is a femme Statham. Like Nevada Smith she gets herself thrown into jail so she can kill another incarcerated person. Like Statham in the Charles Bronson inspired Mechanic she sneaks into an impregnable compound through the swimming pool, which in this case is full of CGI sharks.

Saldana makes the film work with her lithe ability and good athletic looks, but Colombiana is a potboiler that’s made to appeal to a kind of low common denominator of movie sensibility. Colombiana isn’t a super hero movie yet Saldana has the ability to avoid gunfire and injury as if she was born on Krypton.

Colombiana looks slick enough but on closer examination there’s a ton of continuity errors. For instance Cliff Curtis (from New Zealand but he’s got a South American accent down pat) has noticeable bruises on his knuckles from beating an adversary yet the next morning his hands are spotless. In an opening scene a nine-year old Columbiana throws up at the American embassy on an official’s desk but the wide shot shows nothing. Shots that are supposed to take place in Chicago look like they’re shot in Mexico. I could go on with some of the other silly plot twists but why bother when to some that is the mark of excellence? Couples behind me at the preview screening were saying afterwards that Colombiana was the best film they’d ever seen. They either don’t get out that often or they’re in the witness protection program. Colombiana illustrates the maxim that one person’s ceiling is another person’s floor.