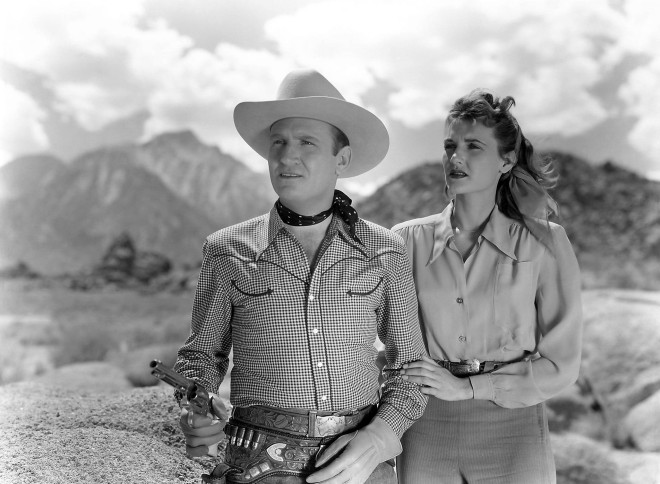 You probably haven’t gone through the Christmas season without hearing songs like “Rudolph the Red Nosed Reindeer” or “Here Comes Santa Claus.” Gene Autry wrote both songs. I know, right? I thought Black Santa Claus wrote the Rudolph tune in the year 1277.

Leon casino, Autry made a name as a singing cowboy on radio and in film, first for Republic Pictures, then after WWII with Columbia Pictures. Autry’s company Flying A Productions produced a series of television shows starting in 1950. The Gene Autry Show: The Complete Television Series (12/10, Timeless Media Group) celebrates the early years of the tube with the emphasis on Autry’s signature show.

The Gene Autry Show ran on CBS from 1950 thorough 1956. The western themed show had very good production values, especially for those particular years when the newness of the format meant you could get away with anything in terms of real sets and realistic backdrops. Sure, you can tell that the person riding their steed is a stunt man and then cut to the villain, which is a masked femme in one episode from the first season, as they hop off the horse. A typical episode would have Gene, plus his faithful horse Champion, and his co-star Pat Buttram (best known for his role as Mr. Haney on Green Acres) shooting the shit in a stable. Then Gene starts talking about Wrigley’s Spearmint gum (an early sponsor). Eventually Gene gets around to saving the day and upholding the manly cowboy code in any number of by now cliché plotlines. There’s 15 DVDs with all 91 episodes, plus great extras like recordings of Autry’s radio shows and one disc that contains a couple of eps each from other Flying A shows: The Range Rider, Annie Oakley, Buffalo Bill Jr., and The Adventures of Champion. 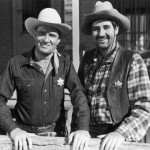 The thing about Autry was that he had a core philosophy and at the base of that spine was his cowboy code. The following is the Autry code taken from Wikipedia.

“In response to his many young radio listeners aspiring to emulate him, Gene Autry created the Cowboy Code, or Ten Cowboy Commandments. These tenets promoting an ethical, moral, and patriotic lifestyle that appealed to youth organizations such as the Boy Scouts, which developed similar doctrines. The Cowboy Code consisted of rules that were “a natural progression of Gene’s philosophies going back to his first Melody Ranch programs—and early pictures.” According to the code:
The Cowboy must never shoot first, hit a smaller man, or take unfair advantage.
He must never go back on his word, or a trust confided in him.
He must always tell the truth.
He must be gentle with children, the elderly, and animals.
He must not advocate or possess racially or religiously intolerant ideas.
He must help people in distress.
He must be a good worker.
He must keep himself clean in thought, speech, action, and personal habits.
He must respect women, parents, and his nation’s laws.
The Cowboy is a patriot.”

Actually that’s kind of inspiring based on its own merits; and I’m sure he doesn’t mean the use of the word patriot in the conservative religious sense.

Omnibus: Gene Kelly – Dancing, A Man’s Game (12/17, Entertainment One) unfolds like a master’s level class on the history of American Dance told by an undisputed practitioner of the art. Omnibus was an arts-themed show hosted by Alistair Cooke that ran on different networks throughout the 1950s. A booklet that accompanies the disc reminds that the average weekly viewership of a given episode was 16-million. Even highly rated shows in the new millennium strain to achieve that number. It’s a rating that attests to the quality of the individual episodes, but also to the fact that television in the era was only broadcast on a handful of channels and that Sunday early evenings were a time when the entire family was home.

You can’t help but be impressed by the moves Kelly busts out with, but also by the way he delivers his content without missing a beat. Much of the content is live, so if Kelly mispronounces a word he quickly corrects himself with grace, without missing a beat. At one point Kelly mentions the Russian ballet impresario Sergei Diaghilev (1872 – 1929) and you know this guy knows whereof he speaks.

The kicker to this episode from December 21, 1958 is that in addition to demonstrating how dance is a man’s world as much as it is a woman’s, Kelly also illustrates the similarities of athletic endeavors with dance movement. To hammer home the images Kelly enlists then-current sports figures like Mickey Mantle (New York Yankees), Bob Cousy (basketball), Olympic skater Dick Button, quarterback Johnny Unitas, and even middleweight champion Sugar Ray Robinson to contrast and compare. Mantle does a slide and Kelly does same with extended arm movements effectively turning the moment into something special derived from motion. Kelly and Sugar Ray do a dance duo that will literally blow you away.

The restoration has some light defects (like horizontal roll, and occasional scratches). Nowadays everything is stored digitally. (Who knows how long that will last?) Back then programs of this stature were just the norm of the day, and little thought was given to their place in broadcast history.

In Their Own Words: Homeless in Houston