Posted by: MBergeron November 20, 2013 in Film Leave a comment

For more than one reason The Hunger Games: Catching Fire is the right film for the moment. Thor: The Dark World may’ve opened big but by most accounts it was a weak entry in the blockbuster contest. Jennifer Lawrence, who star’s as Katniss Everdeen, just won an Oscar and is a current It Girl (because there’s always more than one). The theme of a repressive government organizing the country into districts ruled by iron hands and then forcing those districts to compete with each other through a broadcast medium kind of sounds like the next Presidential election.

Leon casino, HGCF has characters with catchy names like Plutarch Heavensbee, Beetee, Haymitch Abernathy, and Snow’s Granddaughter. Perhaps best of all Catching Fire has true action cinema prowess, churning its lengthy story into a concisely edited, jet-fueled killing spree with a dazzling ending. At two-and-a-half hours, which seem to move by like the flash of a whip-pan, the movie seems lean. I was still hungry for more during what was obviously the film’s closing shot. The Hunger Games: Catching Fire is like the Goodfellas of Young Adult lit ripped from the pages and thrust onto the screen with franchise savvy.

At the helm is Francis Lawrence, whose credits include Constantine and I Am Legend, and is also attached to the next two installments The Hunger Games: Mockingjay Part 1 & Part 2. (2015 may be the ultimate franchise year in movies with Avengers 2, the Star Wars reboot and the last part of Hunger Games all being released.) Lawrence paints his depiction of oppression in bleak muted colors, as if many of the rays of light aren’t strong enough to be seen under cloudy skies that hide the sun. There’s one establishing shot of the forest early on that was so soft it was like looking at an impressionist painting. 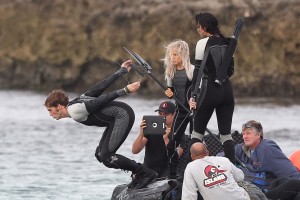 The first time I was aware of a scene with bright sun was more than half way through Catching Fire, at the very moment that Katnap bursts up from the bowels of the earth and onto the combat field. There’s no time to wallow in the mire of dingy colors, as the contestants must make lightning quick life or death decisions in the hard light of day. Those who’ve read the book know that a twist at the end changes many relations significantly.

Catching Fire also has a PG-13 vibe exemplified by the editing of the deathblow to snippets and reaction shots as well as the perspective of a scene where a person is whipped in the town square. After 12 Years A Slave you don’t want to have such a scene in your film lest you be called a weak sister.

2013-11-20
MBergeron
Share !
Previous: The Biggest Loser, May be the Winner
Next: The Armstrong Lie