The Cabinet of Dr. Guillermo

Posted by: MBergeron November 6, 2013 in Featured, Film Leave a comment 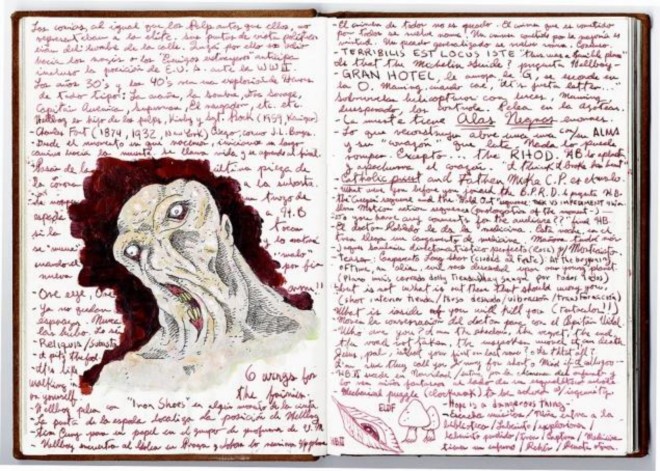 Guillermo del Toro is one of the Threw Musketeers of Mexican Cinema, the others being Alfonso Cuarón (Gravity, Children of Men) and Alejandro Iñárritu (21 Grams, Amores Perros). Okay, I know there are more than three musketeers and there are definitely more than a trio of Mexican directors worth checking out. del Toro has always had a penchant for the macabre workings of gear assisted devices from his debut film Cronos to his most recent Pacific Rim.

Guillermo del Toro has written (with Marc Scott Zicree) an extensive overview of his personal notes on movies he’s directed, his drawings for same, and his recollections of events surrounding the productions. Guillermo del Toro Cabinet of Curiosities: My Notebooks, Collections, and Other Obsessions is a lavishly illustrated coffee table sized book that will rightly find a place on the shelf (or, ah, coffee table) of any maven of fantasy cinema and even serious movie fans. Zicree is a science fiction author and his The Twilight Zone Companion has been in my collection since I was a young man (and that was like 100 years ago).

While the book proper is priced in the same range as similar display books, there are a limited number of free standing cabinets with drawers in which the book resides inside a hidden compartment. Hidden panels figure in del Toro’s cosmology. As do the labyrinths of Pan’s Labyrinth or the weird creatures from literally every movie he’s made. Additional chapters by actors like Ron Pearlman (a del Toro regular) or Tom Cruise (attached as is Pearlman to At the Mouth of Madness) describe working with a person whom they consider a creative genius with a calm demeanor. Also intriguing are chapters by Cuarón and one by John Landis that describes a tour or del Toro’s house (Bleak House) filled with room after room of props and art. 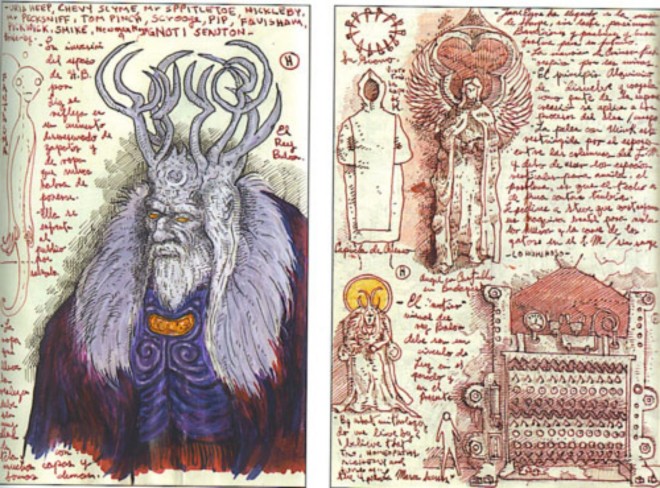 It’s great to see the genesis of familiar creatures with detailed notes surrounding the image, for instance describing the evolution of various antlers or eyes or horns or tentacles. del Toro’s drawing of the vampire mouth in Blade II was a top secret. In fact del Toro admits he started not carrying his journal during his time on The Hobbit because he didn’t want to risk forgetting it in a coffee shop and have the notes fall into the wrong hands.

Most illuminating are some short chapters near the end that describe del Toro’s work on never finished projects: At the Mouth of Madness had one character that pre-dated (yet has not been  made) the tentacled mouth version of Bill Nighy’s character in the Pirates of the Caribbean movie; The Left Hand of Darkness, a retelling of The Count of Monte Cristo in which the count has a monster hand and that del Toro rewrote after his father was kidnapped in Mexico in 1997; The List of Seven, a Sherlock Holmes adventure in which Conan Doyle meets his character while investigating occult activities in Victorian London; and others like Meat Market and Mephisto’s Bridge.