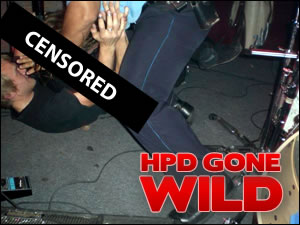 This shit is getting too predictable. Honestly, another week brings another report of HPD overreacting to the noise ordinance. Last week it was a cop pulling a gun this week it’s a report that Dubstep DJ Badbwoy BMC was arrested for an alleged noise violation. Apparently a little after midnight on Wednesday, February 8, an HPD officer rolled up to Mango’s where BMC was working some tracks from his upcoming “Dubbed Out” LP, which drops in March from Swisha House, into his weekly gig. According to BMC, real name Billy McCain, HPD stopping by is all too common. In an e-mail sent to FPH, BMC states that HPD has been coming by Mango’s almost every week to “see if the bass can be heard from outside”  since he “won a noise violation ticket in court,” on April 5 of last year. BMC says that the cop sat outside of Mango’s for about 30 minutes before coming inside and telling him to come outside.

BMC goes on to write:

“So I grabbed my jacket and lit a cigarette thinking this would be another ticket. As we were walking outside he asked me to get rid of my cigarette and told me to put my hands behind my back. I asked him if he was serious and he said yes. So I threw my cigarette down and he said he was gonna give me a ticket for littering. As he began cuffing me I told him that this was harassment. I explained to him that I would lose my job if i went to jail. His reply to me was too bad shouldn’t have been loud.”

The rest of BMC’s tale is all-too-familiar to anyone who’s been in HPD custody, 10 hours to get processed in and six hours to get processed out even after someone posts bond. And like anyone who works in music knows, spending 24 hours in jail isn’t a vacation when you’ve got gigs lined up. “I ended up losing my gigs for the rest of the week because there was no way for me to contact my employer,” writes BMC. He goes on to write that HPD giving out tickets to enforce the noise ordinance has become commonplace. The arresting officer “comes to Mango’s almost every Tuesday to give out tickets for noise.” According to BMC on October 12, the night the new noise ordinance went into effect, “he gave out six tickets for the same noise violation. Micheal Watts, myself, the sound guy, the bar manager, the owner of Mango’s and the person who owned the sound system” were all ticketed.

With the amount of tickets that are being handed out at Mango’s it would be easy to assume that the club is just blasting out the music and not making any concessions to the neighbors. That’s a wrong assumption. Since the new ordinance went into effect in October 2011 the owners of Mango’s have spent over $3,000 to improve the club’s sound proofing. BMC says that they added “double doors on each of the exits and also putting up bass traps through out the building” as well as enclosing the front patio to try and contain the sound. “These are all guidelines that the city has told club owners to do so they won’t have any more issues. But that’s not the case,” writes BMC.

According to BMC’s lawyer Jonathan Landers the arrest itself wasn’t illegal, just uncommon.

“A person in Texas can be arrested for any offense, with the exception of speeding and open container.  However, for offenses punishable by fine only, an officer is given the option of issuing a person a citation which requires their appearance in court.  This is the standard practice throughout the state.  In the past, Badboy has followed the law and appeared when he was given a citation.  The officer in this case apparently decided to arrest Badboy to make a point.”

He goes on to point out that currently “there are over two hundred ways to violate this statute” and that since it’s easier to break this law than it is to obey it he feels that the noise ordinance is “unconstitutionally broad.” Landers says that since conviction under the new ordinance only requires the testimony of a single officer saying he or she “was ‘aware of the vibrations’ caused by my music,” as opposed to say a reading from a decibel meter, means that the law “possibly does not put a person on notice of what is being outlawed.”

“In the past, I could go outside and make sure I was not in violation of the law by measuring volume myself.  Now, I am forced to guess at whether a random officer will be able to feel the music,” wrote Landers.

Unsustainable Model: How Free Shows Can Kill A Scene

Moving from Labels to No Labels in 2017