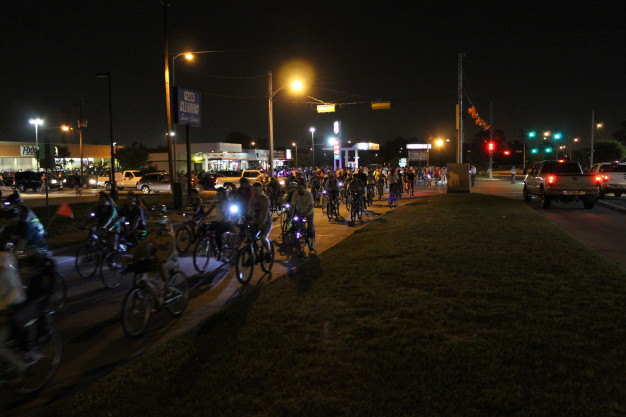 A neighbor of mine had me tag along last-minute to April’s Critical Mass bike ride. An evening with 2,500 people riding bikes like a swarm of ants over 20 miles of Houston. Mind you, my bike is a piece-of-crap with mismatched wheels. Mind you, I’m not a cyclist. I ride for exercise and to skimp on parking in the city. Mind you, I’m just as pissed as everyone else when spandex-covered riders with $10,000 bicycles and an oh-so-much-better-than-you-for-not-using-a-combustible-engine attitude cut me off.

Hell, I’ve been one of those unlucky folks to find myself stopped mid-drive by the flock of semi-organized bike riders during a CM ride. Considering it’s a monthly event, you’ve probably been in the position. Imagine being stuck at a train crossing, but with the guilty knowledge that you COULD force your way through. Not that you should. Besides, CM serves an important public service announcement: share the damn road. As for that guilty knowledge? It’s a real concern in the city.

Not long after April’s ride ended I contacted CM via email to get some of the good old who/what/when/where/why/how out of them. Critical Mass started in San Francisco 22 years ago. It’s conducted worldwide. The namesake comes from a documentary about bike culture overseas titled “Return of the Scorcher.”

From the email:
In that film, American human powered vehicle and pedicab designer George Bliss noted that, in China, both motorists and bicyclists had an “understood” method of negotiating intersections without signals. Traffic would queue up at these intersections until the backlog reached a “critical mass”, at which point that mass would move through the intersection. This term from the footage of the movie, was applied to the name of the ride, and the name caught on.

According to the email, Houston’s Critical Mass started a decade ago with a few dozen bike couriers. Remember those? They’re the insane men and women who rush documents from building to building at lightning speed, risking all kinds of damage from pedestrians and drivers alike. Well, only a few of them exist today, considering the digital era has all but eliminated the need for ink and pulp. Good to know newspaper journalism has company. Still, riding a bike wasn’t safe in Houston a decade ago, and it’s not safe now. One more quote from the email:

Cycling safety is always a concern. We think Critical Mass plays a huge part in raising cycling awareness in Houston. The Safe Passage ordinance is a huge leap in cycling safety, but more needs to be done to protect our cyclists. We need to improve our current infrastructure to accommodate cyclists and pedestrians, and we need to educate our car drivers about sharing the road with cyclists.

Specifics of that ordinance can be seen on houstontx.gov, just search for the 2013 bike ordinance. You would think that we’ve made progress with rules like that. And you hear about how Houston is bike friendly, but the info comes courtesy of anonymous internet hacks who don’t ride or live in the city. You hear about the bike share program, but not the fact that the Houston METRO line can only accommodate two bikes per railcar (and zero during rush-hour). You hear about the 500 miles of trails along the Bayou network, but that’s 500 miles of sudden stops, construction blockades and (in certain parts of the city) muggers.

Look at the bicycle-related headlines in Houston. Discounting vehicular fatalities, there’s the biker who uses a three-foot flag and camera to illustrate personal space to greedy drivers. A lone man welding ghost bikes to various points in the city where a cyclist met their fate. And yes, the ongoing discrepancy over whether the 2,500 plus riders at April’s CM impeded the Ambulance when it tried to reach a 60-year-old cyclist experiencing what would become a fatal heart-attack. This is our news cycle.

We’re not Austin-a good thing mind you-but at least Austin has it together when it comes to riding a bike. Austin doesn’t try to grind you into the pavement via entitled little teenage drivers welded to smartphones. Doesn’t want to make a bike fall to pieces on a cracked, hole-ridden path. Hell, College Station-with its well-designed sidewalks and pathways-is more bike friendly than we are. That’s saying something. Houston isn’t even on the level of a city made up of overcompensating pickup trucks and habitually drunk college kids.

Imagine the day Houston fits the Tech Street “Smart City” description. A synchronized transportation hub of walkers, riders and drivers. METRO-rails crisscrossing amongst self-driving cars with pedestrians flowing and cyclists darting in and out. The only price tags will be zero free parking, Orwellian elimination of the freedom to drive yourself around and maybe the fact that by then, Houston will be as exclusively rich and snobby as New York City or San Francisco.

NOTES FROM THE RIDE:
It was around 7 p.m. when we got to the meeting point. Thousands of bicycles around Main Street Square. Every age, race and income level represented. Some riders wore the full getup: spandex for aerodynamics with a try-hard bike helmet and custom $5K racing bicycle. Others showed up with nothing but a pawn shop bike and a six-pack of beer. Meeting and greeting while organizers prepped. Brand ambassador girls with skintight clothing handed out energy bars. Then someone shouted something over a loudspeaker-who knows if anyone could tell what it was-and we were off.

Nobody could move quickly enough. Too many bodies and bikes. Too unsynchronized. Every fifth bike rider had music blasting from phones and MP3s. Between the typical two-wheel setup rolled a few trikes, recumbents with their god-awful, lay-down look and several people toting wagons of stereos or ice chests.

People fell into line after 10 minutes or so. Speed riders up front. Cruisers in the middle. Leisurely in the back. Every mile or so we’d stop at an intersection so the gaps could close. When we hit the bridge past the northwest part of downtown, the speedsters took off from the rest. I was stuck in the middle, but with some maneuvering managed to get near the front for a few photos. The forerunners stopped occasionally, but for the next 30 minutes, it was a thin line of cyclists followed by a mob. Houston police blocked traffic at certain intersections throughout the whole thing. Some stood by flashing squad cars. Some wore bike helmets.

We toured up the northwest side of Houston. Never made it past the 610 loop, but we didn’t need to. We went past several schools and neighborhoods. People from houses and bars yelled encouragement. Car drivers could do nothing but park and stare with the hatred of 10,000 suns. The ones that had kids in the car seemed excited, if not curious. Every truck driver upset at his inability to overtake the stream. Riders moved in a hive mind pattern at this point. Dips in the road and lane switches caused synchronized movements like a school of fish.

It got dark about 8 p.m. Red lights blinked in front of me and white lights blasted from behind. The break came at 8:30. Halfway point was a grocery store called Food-o-Rama. At least half of all the riders went in for supplies. Most of the supplies included beer. It must have been 30 minutes at the Food-o-Rama. However many people were at the Main Street Square in the start, it seems like the number quadrupled. Music blared, people drank, bikes lined up and parked, red flashes coming from most. It was a disorganized mass for the better part of an hour. Then the ride took up again.
It was just at this time the paramedics showed up for the cyclist who had suffered a heart attack. Most of the bikes around the ambulance parted way. Some in the front had a hard time noticing. This is where the confusion set in. Cyclists trying to get out of the parking lot mixed with ones staying to witness the scene. Music blared from dozens of sources, and the rider with the bubble machine on the back of his bike had no idea he would later be the cause of ire and frustration.

Ten minutes later, I made it to the forefront of the pack. Had to pedal like a lunatic just to keep up. Another bridge over the Buffalo Bayou. Steeper this time-hillish, with a view of the downtown skyline off to the left.

One of the Critical Mass organizers, I assume he was at least from the way he carried himself, had everyone do a massive stop at Westcott and Blossom. He was at least 50, with a red tank top and a loud-as-hell human-powered horn. It looked like a vuvuzela. Riders were going too far ahead, getting lost. Some of the faster riders, half-a-dozen or so, were still a quarter of a mile up the road, and had stopped, waiting for us to go to them. People got chatty.
“I wish they’d shape up,” someone said.

“It never works that way,” the organizer said. “Everybody is a racer at critical mass.”

A woman in a car passed by and whistled at one of the shirtless riders.

“Hey could I get your number?” He shouted as she drove away.

One of the riders, couldn’t have been on many of the rides, said something about not lasting the whole 20 miles.

“After Critical mass is over, I got another 30 miles to ride. Want to go with me?” someone asked him.

The mass caught back up. The leader shouted some words about where we were headed, an example of how unrehearsed the bike path is, and we were off again. After a few more turns, we were headed straight for downtown. Another left, this time with the final HPD street block. Someone shouted “Thank the officers for their time,” and was met with an ocean of bike riders yelling different words of gratitude as they rode past the spot.

It was another 20 minutes before we saw the downtown skyline. The park came up first. People formed up, trying to conserve space on the narrow road. A car would force its way in the line now and then. Eventually, it gave up and took off at first chance.

Each dip in the road made riders accelerate. Some hooted and hollered, glad to be in the front, close to the ride’s end. Once we made it in downtown, closed off by all the skyscrapers, there was one final pause. Riders caught up. Then we were off. One final tidal wave of bicycles and humans flowing down the streets of Houston. Some were pedaling with all they had left. Others slid a free hand against a moving METRO bus, not a care in the world.

Main Street square was anti-climactic. A few dozen cycles stopped, bikers stepped or fell to the ground, or headed to the on-site Niko Niko’s for pizza or water. Other riders trickled in as we waited, but the ocean was gone. Some might have dispersed, headed home, or simply stopped after the several intersections. Either way, the ride was over. No awards. No metals. No finish line.