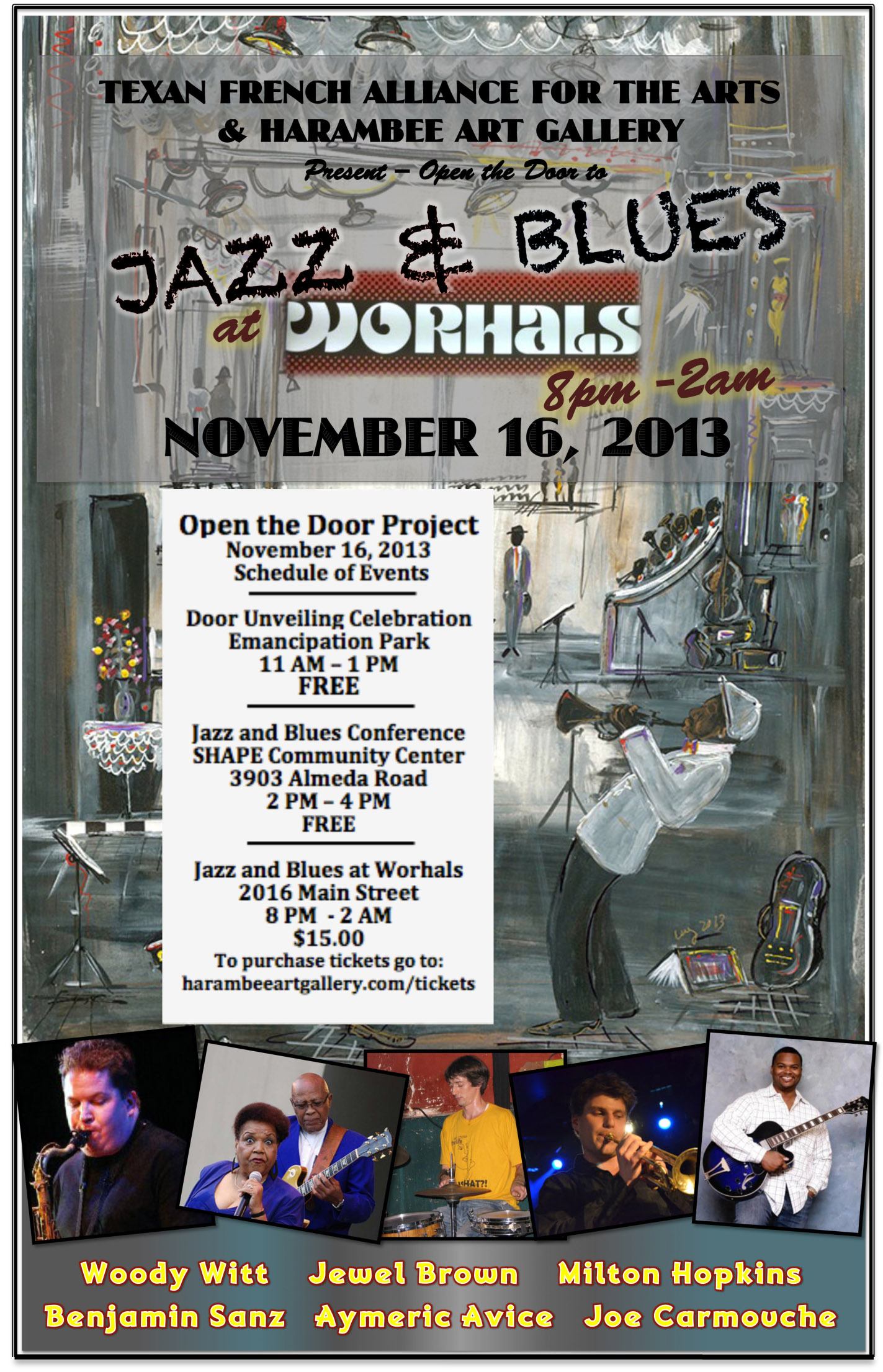 This Saturday, the Texan-French Alliance for the Arts (TFAA) and Harambee Art Gallery have put together a full day of activities around the themes of fine arts, jazz and blues.  French jazz musicians Aymeric Avice and Bernard Sanz will share the stage with Houston’s Milton Hopkins, Jewel Brown, Joe Carmouche and Woody Witt. The event is part of TFAA’s citywide “open-the-door” public art project that was launched earlier this year and includes 60 doors in 19 neighborhoods. Amongst them is Charles Washington’s and Jesse Lott’s door in Emancipation Park that pays tribute to blues legend Lightnin’ Hopkins and artist Bert Long. 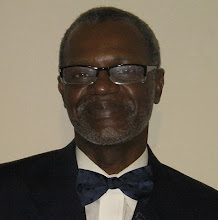 Charles spoke about the project in a phone interview:

Nick Cooper: Can you talk about how you got involved with the project?

Charles Washington: Open the Door project has put doors all around the city of Houston, to show an open door for others, for opportunities, and also a platform for artists. They came to me because I recycle doors. I wanted to do a blues jazz sculpture, a tribute to Lightnin’ Hopkins, because he used to play on Dowling at the El Dorado Club. We wanted to pay tribute to him and also we wanted to honor the musicians who are alive including Milton Hopkins (his cousin), and Jewel Brown.  The goal was to celebrate them while they are alive instead of when they make their transition. 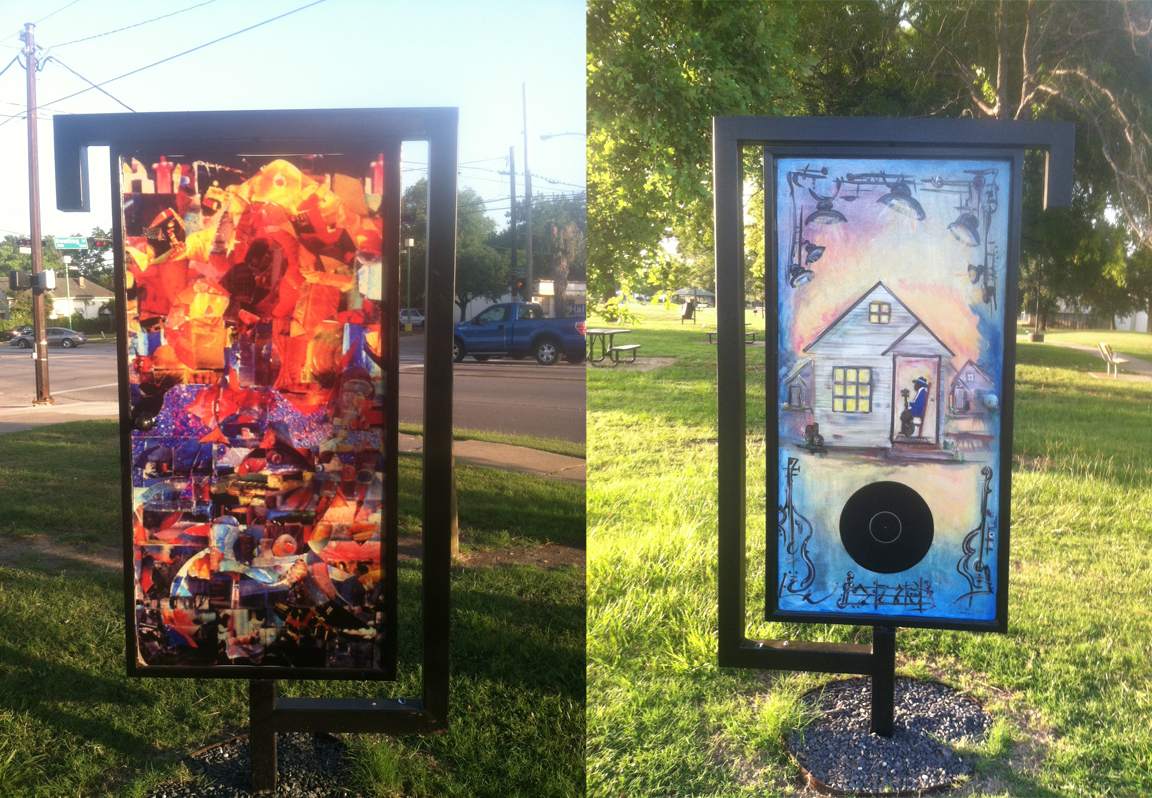 How did you make the door?

The door is made out of metal, and it’s a three dimensional relief. Lightnin’ Hopkins sits in the row house with a guitar. He also got a Grammy this year [Hopkins died in 1982, and won a 2013 Grammy for Lifetime Achievement.]. The door is all metal, because we wanted to have it as an outdoor sculpture. We used a laser cut, and then I hand painted it. On the other side of that door is a tribute is a tribute to Bert Long, a renowned artist who passed away last year. Right now it’s on display but we want to sell it to someone who will put it back in Emancipation park.

Have you done other jazz related work?

I have a series of pieces on Conrad Johnson, and a collectable piece on a garment owned by Dizzy Gillespie. I did it in ’94.  I had some friends who knew his wife Lorraine Gillespie. She told me the story of how his horn was bent, and I actually put that on the garment. It’s about sharing the culture of blues and jazz. Next year my goal is to honor Little Joe Washington. These artists nowadays aren’t getting their fair due, I want to be able to use my art as a platform to help them get that.

About the Artists (straight from the press release):

Benjamin Sanz is a drummer and composer who has lead several projects influenced by jazz and African musical forms, such as the Benjamin Sanz Quintet. For seven years he organized and presented a jazz and world music jam session at La Miroiterie (Paris, France), a venue for musical encounters and sharing of knowledge that was supported by great musicians such as David Murray, Bobby Few, Ernest Dawkins, Sabir Mateen and others. His polyrhythmic styles focus on improvisation and spontaneous creativity, and leans towards strong time signatures and consistency of the overarching sound. His training was strongly shaped by his encounters with accomplished musicians and his travels. He has performed in Europe, Africa and the U.S with musicians such as David Murray, Byrd Lancaster, Roy Campbell, Lobi Traore, Safiata Conde, Oliver Lake and many others. He has just released a hip hop album with New York jazz funk collective Black Rock Coalition called Divine Pocket Bouncers. His extensive knowledge and practice of black music and improvisation have made Benjamin Sanz an increasingly sought-after “sideman”.

Milton Hopkins and Jewel Brown, are two of Houston’s legendary blues artists. Milton Hopkins was the lead guitarist for B.B King from 1971-1980 and the linchpin of the local blues community for many years. Jewel Brown is a jazz and blues singer who was a part of Louis Armstrong’s ensemble for five years in the early 60’s. They released a joint album in May 2012 under the Austin based label Dialtone “Milton Hopkins with Jewel Brown”.

Joe Carmouche is one of Houston’s most in demand performers. He is a guitarist who has performed for President Obama’s 2013 inauguration day and has performed with Joe Sample, Ronnie Laws, Michael Henderson, Everette Harp and many other established jazz artists. He also teaches music theory and guitar at MacGregor Elementary School in Houston. He was twice nominated Best Jazz Artists at the Houston Press Music Awards and received a certificate of congressional recognition from congress woman Sheila Jackson Lee in honor of his musical accomplishments. He has released three CDs and received the best jazz album award for “A touch of Jazz”.

Woody Witt, is a saxophonist, composer, performer and educator. His fresh ideas and original approach to improvisation and composition have earned him a place to perform with some of the top names in the industry. Woody has established himself as a notable musician in the area and has performed with the Houston Symphony Exxon-Mobil Pops Series backing artists including Ray Charles, Kenny Rogers and Tony Bennett. He is also the manager/artistic director of one of the city’s only jazz clubs, Cezanne. Dr. Witt is a full time instructor at Houston Community College and is an affiliate artist at the University Of Houston Moores School Of Music. Woody holds a Master’s degree in Jazz Studies from the prestigious university of North Texas where he taught saxophone and jazz methods. He received his Doctor of Musical Arts degree from the Moores School of Music at the University of Houston in 2000.

The Texan-French Alliance for the Arts (TFAA) is a non-profit cultural organization. Founded in 2005 by former Consul General of France and a group of enthusiastic Francophile foundations, corporations, and individuals, TFAA serves to promote and facilitate artistic and cultural exchanges and educational programs between Texas and France. Through its support, artistic and cultural institutions form partnerships to advance Texan art and culture in France and French art and culture in Texas. Under the aegis of the TFAA, these varied artistic partnerships serve to promote new artists and expose audiences of today and tomorrow, to the appreciation of different art forms, thus strengthening cultural awareness between Texas and France.

Harambee Art Gallery is a fine art gallery focused on advancing environmental art by promoting the use of recycled materials in art and design. Located in the SHAPE Community Center Harambee building at 3903 Almeda Road, in Midtown Houston, the second floor gallery houses a full array of original paintings, sculptures, multi-media artwork and art furniture. The gallery offers classes, support, and exhibit opportunities to emerging and established local, national and international artists. Additionally, the gallery provides support for artists of all genres by partnering with arts related organizations to present a variety of cultural programs. The Harambee Art Gallery houses part of the Charles Washington collection, his “What’s in a Door?” project and is the official home of his Jazzmobile, Bluesmobile and Classy Red award winning art cars when they are not on tour.