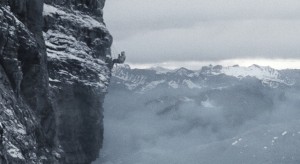 North Face tells its true story convincingly, and even in the middle of freezing imagery with warmth. This 2008 German film, Nordwand, reminds viewers of the Brad Pitt character in Inglourious Basterds saying “You all like mountain climbing. Now you got a good how I broke my leg mountain climbing story.” On a serious tone in the mid-30s two soldiers are seen leaving service in the Nazi army to pursue their true passion of mountain climbing. The north wall of Eiger. a 13,000-plus peak in the Bernese Alps in Switzerland, is considered one of the most treacherous ascents in the world. Pikes Peak is taller and you can drive to the top. There’s no road to the top of Eiger although there are elevated railway lookout posts and resort hotels where non climbers can safely observe the progress of those attempting to navigate the impossibly steep terrain. The same locale was highlighted in the 1970s action film with Clint Eastwood, The Eiger Sanction. The climber’s map shows two ice fields and various other hazards to their quest. Benno Fürmann as Toni Kurz resembles a tall and and lean Euro Viggo Mortensen while his companion Florian Lukas as Andreas Hinterstoisser exhibits a more wiry yet physical acumen. The film chronicles their climb while cutting back and forth to a pretty reporter and her editor who are writing about the event for their newspaper. She knows one of the climbers and their journey becomes personal for her. The news stories, kind of human interest pieces celebrating German athletic accomplishments, are seen as part of the Nazi propaganda machine although the point is made that these people are attempting a kind of human experience that if not spiritual is at least outside of the bounds of political opportunism. The climbing choreography provides non-stop thrills, the kind of action beats that propel thrillers. Only here the bad guys are the elements. As their mission progresses the two heroes are bruised and weather beaten. What happened on this expedition is a matter of historical record and I won’t spoil the gripping conclusion as that’s likely to be unfamiliar to domestic viewers.