Leon casino, RoboCop bursts with satire and action onto the screen in a remake helmed by José Padilha. While the social commentary of the new RoboCop doesn’t have the same comic twists of Paul Verhoeven’s 1987 version there’s still a mocking acceptance of the corporate chain of power that seduces the population with gee-whiz technology and mass media. 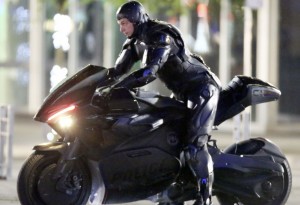 Padilha’s a good fit for the material and invests the story with references to other countries, like China where OmniCorp (heartlessly lorded over by CEO Michael Keaton as Raymond Sellars) performs its experiments on humans. Padilha also has a sense of the division of power and potential for civil rights violations inherent in police departments as well as how easily medical research can be turned around to suit the interest of those paying for said research. An opening segment shows the use of drones and military grade robots getting their asses handed to them by terrorists using suicide bombers to make their point in Iran. RoboCop takes place in 2028 and presumes that we occupy Tehran at that time.

Padilha’s Brazilian films include Bus 174 (about a hostage situation on a bus) and the highly recommended Elite Squad: The Enemy Within (a film that also explores levels of corruption in elected officials and the prison system). RoboCop stars Swedish actor Joel Kinnaman as the robotic enforcer with support from Keaton, Gary Oldman, Jackie Earle Haley, Jennifer Ehle, Jay Baruchel, and Abbie Cornish. Particularly effective is Samuel L. Jackson as a television host whose views on deadly force and use of drones in America bracket the beginning and end of RoboCop.

While there is plenty of irony to the events depicted there’s perhaps a bit more emphasis to the action and violence, which is mostly gunfire and PG-13 destruction of robots. Padilha ramps up the excitement in one scene where RoboCop takes out a warehouse full of robots to the wonderfully whacked-out’70s rock instrumental “Hocus Pocus.” The most frightening image however is RoboCop after his operation. As the mechanical limbs and torso are removed we see that all this man has left is his face, his brain, a single hand, and his heart and lungs, all contained in a metal body. No wonder his nickname becomes Tin Man.

One Response to Robocop