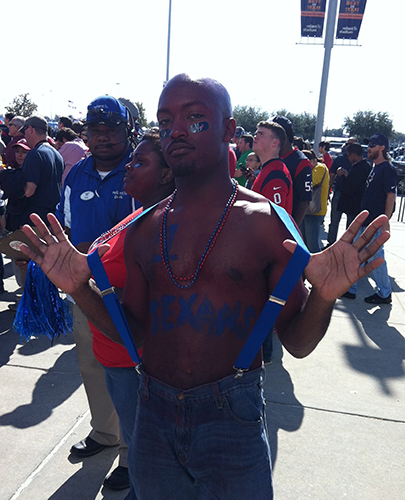 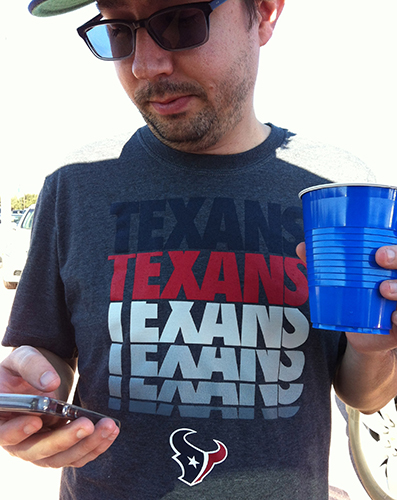 Sunday, the Texans hosted the division rival Jacksonville Jaguars in what would turn into an overtime thriller capped by a game winning touchdown reception for Andre Johnson. The Jags (aka Glitter Kitties) are one of the worst teams in the NFL. The Texans are one of the best. Everyone, including myself, had the glitter kitties written off. This game was going to be a blowout, right? Wrong! The Jags came to play and had the Texans up against the ropes much of the second half. Still, The Texans showed tremendous grit battling back to erase a 14 point fourth quarter deficit to win 43-37 in overtime to improve to 9-1 on the season. 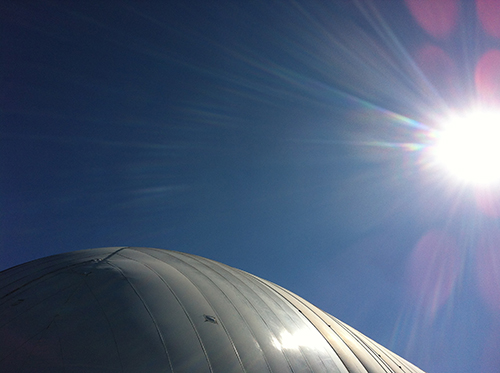 It was a beautiful day and perfect conditions for tailgating. Fans were relaxed, expecting an easy victory, and Jaguars fans were non-existent. Well, there are always a couple. Go figure, this being one of the largest cities in the country. Jacksonville has been a mistake of an NFL franchise. I say this because they can’t sell out their stadium, they often have games blacked out locally in Jacksonville, and Jacksonville is not a proper NFL city. Jacksonville is the third Florida NFL team and plays in a market full of college football fanatics known as “Gator Country” (for the University of Florida Gators). The Gators have been wildly successful. The Glitter Kitties have not. Either way, the Jaguars have a new owner who has remained verbally committed to staying in Jacksonville, so they are there to stay for now. 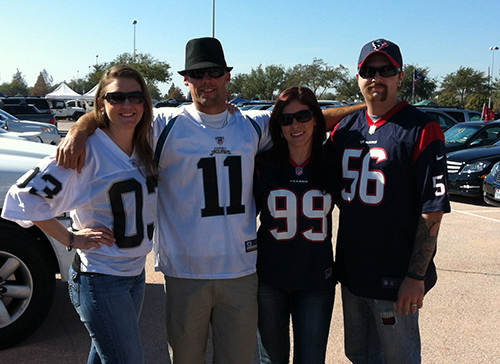 As one radio analyst proclaimed pre-game, “There’s just no way Jacksonville can put up enough points to win.” He was undoubtedly “eating crow” this afternoon as the Jags lit up the Texans with their passing attack putting up 37 points by the final whistle. Their first round pick from last year, Justin Blackmon, had the biggest day of his career recording 236 yards and a touchdown. The TD was a crucial 81 yard reception to put the Jags up 14 points in the fourth quarter.

The Texans scored a touchdown on their first drive with ease, but after that they weren’t able to muster the same success limping into halftime with an unexpected 17-17 tie. After going down 14 points at the start of the fourth, Matt Schaub turned it on to throw for over 500 yards on a day which he suffered some uncharacteristic interceptions. Andre Johnson was huge all day long. He also had an amazing day recording 273 yards receiving on 14 receptions. The latter part of the fourth quarter was all Texans as Schaub looked like he couldn’t miss a pass. The Texans even had the chance win in regulation, but shanked the game winning field goal.

In overtime both teams traded field goals, as the new overtime rules are not sudden death any more. After the field goals the tension was palpable being that any score would decide the game. The breakthrough to seal victory fir the Texans was Andre Johnson’s 48 yard touchdown catch and run, and the crowd went wild. For neutrals, it was by far the most exciting game they’ve played this year. Texans fans would like to them to win more handily, but it is always impressive to see your team display the determination and will-to-win the Texans displayed this week. The Texans are now 9-1 for the first time ever, tied for the best in the NFL, and look prime to lock up a playoff spot by early December.

I’ve long wished that the Texans play a Thanksgiving Day game, but I’ve also been fearful to have my favorite holiday ruined with a Texans loss. Detroit started the whole “Thanksgiving Day football feast” long ago(all the way back in 1934), and they always host a home game on the day. After the Texans defensive performance you have to be concerned because they face a much better passing attack Thursday. Also, it’s a shortened week, so they won’t have the same preparation, and they are coming off of an exhausting overtime battle. I really don’t know what to expect, but Detroit has always gotten their ass whooped on turkey day for as long as I can remember. So, be sure to tune in before turkey time for a hearty serving of Texans football. After all, what is Thanksgiving without football?

Side Note: THE DYNAMO ADVANCE TO THE MLS CUP FINALS in Los Angeles on Saturday, December 1st, as they take on David Beckham, Landon Donovan, and the rest of the evil empire that is the LA Galaxy in a rematch of last years MLS Cup. The Dynamo lost 1-0. I’ll be flying out there to give you guys the lowdown. Congratulations are in order to the whole Dynamo organization, as they prove year in and year out they are a class organization that knows how to get it done when it counts the most. I think our team is much improved this year with the addition of Boniek Garcia, and I’m feeling lucky. I think we’ll get revenge and beat “Goliath” in LA. (finger crossed)

Happy Valentine’s Day From The Kinky Sex Lives of Animals

THE THIS AND THAT ABOUT THE STUFF, ALBUMS