There’s a food delivery system in India that when studied by an Ivy League school was determined to have a zero rate of wrong deliveries. In other words there is a one-in-a-million chance that a dabbawala would drop off a hot meal to the incorrect person. The Lunchbox takes that conceit and runs with same. 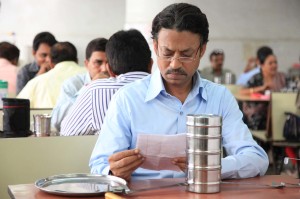 A widower receives the incorrect food container one day. Subsequently he starts a mail correspondence with the lady who provides the meal. Her husband is having an affair and there’s a good chance that she will meet the widower. You could call The Lunchbox an Indian epistolary romcom although the comic aspect is downplayed and the romantic angle is awkward mainly because the man (Irrfan Khan, Life of Pi, The Amazing Spider-Man) seems too caught up in his present mindset to be emotionally available for a relationship.

Foremost though, The Lunchbox is a foodie film. So many Indian delicacies and meal are made or eaten during the course of the story that it’s a given you’re going to head straight for the nearest Indian restaurant soon after seeing the film. The film is desaturated and nicely framed. The acting puts you in the shoes of people feeling a sense of reserve.

Remember the film Salaam Bombay! from 1988? No real relation to The Lunchbox but it was also set in the world of food delivery in Mumbai when that city was still referred to by the Western World as Bombay. The Lunchbox opens exclusively this weekend at the River Oaks Three.