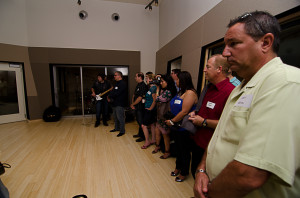 Leon casino, It sits in an inconspicuous location on a rough stretch of West 20th, flanked by a series of aging dive bars, icehouses. The building has warehouses to its right and Apple pest control company to its left. From the outside, it looks like a newly constructed office park or maybe storage. But on the inside it looks the chic residence of some wealthy Houstonian tycoon. It’s actually Houston’s newest recording studio.

Operations like Wire Road and 226 Recordings (also in the Heights) are changing the way musicians interact with their recording environments. Now more studios are affording musicians comfort and utility all in one, possibly making recording less of a chore than it already is for many.

The interior, unlike many professional studios, is anything but minimalist. In fact, if anything, it’s even nicer than my house. Maybe it would be better to describe it as a cozy museum with exhaustive recess lighting and hardwood floors. There are even modern, hotel-quality bathrooms with spacious showers, suggesting that Wire Road wouldn’t be a bad place to pull an all-nighter.

Last Sunday, the studio opened its doors to the public for the first time. Dinner and drinks were served in tents in front of the studio while guests were able to listen to artists recording live inside. Guest were treated to brief sets by Hazy Ray, Trucker’s Choice, and Mantis who already have laid down tracks at Wire Road. Guided tours revealed to attendees two storeys, three recording areas, a mastering room, a kitchen, a well-manicured backyard/patio, video editing facilities and a conference room.

The facility was designed by world-renown architect Russ Berger, who has designed recording studios all over the country including for clients such as NFL Films. The entire project, started in 2009, was the brainchild of producer James Kelley and his father Byron Kelley. It’s been quietly operational for the last two months, but now that it’s finally publicly open there’s no telling what kind of talent it will attract.

Alligator Buzz: The Best of The Week