The Vimalakirti Sutra is “the subject of multiple depictions at the Mogao Caves in Dunhuang, China.” The Mogao Caves are an UNESCO World Heritage Site that comprises over 700 caves, of which more than half contain art and sculptures. Cave 17 contains “over 50,000 manuscripts, paintings and materials.”

Free Press Houston spoke to Sellars by phone in advance of his Houston appearance.

“What if you have to deliver yourself to the object, rather than the object being delivered to you?” asks Sellars, describing the difference in how art was experienced centuries ago and today. “Now if you want to go to China, you say to your friends I’m going to China tomorrow night. In the Eighth Century if you wanted to go to China you would spend several years of your life for that one journey. Your life totally changes in the process of taking a journey.

“In the old days, you had to change everything about yourself to go to China. That transformative thing that travel does to you,” says Sellars. “Now there’s not much difference between the Hyatt in Shanghai and the Hyatt in Houston.”

Sellars will be talking about “China’s place in American life and America’s place in Chinese life. Now we have displacement of entire populations. People on the road are a new culture composed of people who are moving. One of the things Houston shares with Los Angeles and that Los Angeles shares with Houston is the sense of living in a frontier city where new populations are appearing. A new society is being created and it’s incredibly exciting.”

Art of the Vimalakirti Sutra repeatedly appears in the Dunhuang Caves. “One of the most amazing things about the caves in Dunhuang is that they are totally immersive experiences. It’s like installation art from the Sixth Century,” says Sellars. “The art in the caves was made by people coming from many different parts of Central Asia, Mongolia or Japan or Korea, definitely India but also Greece and of course Persia.” 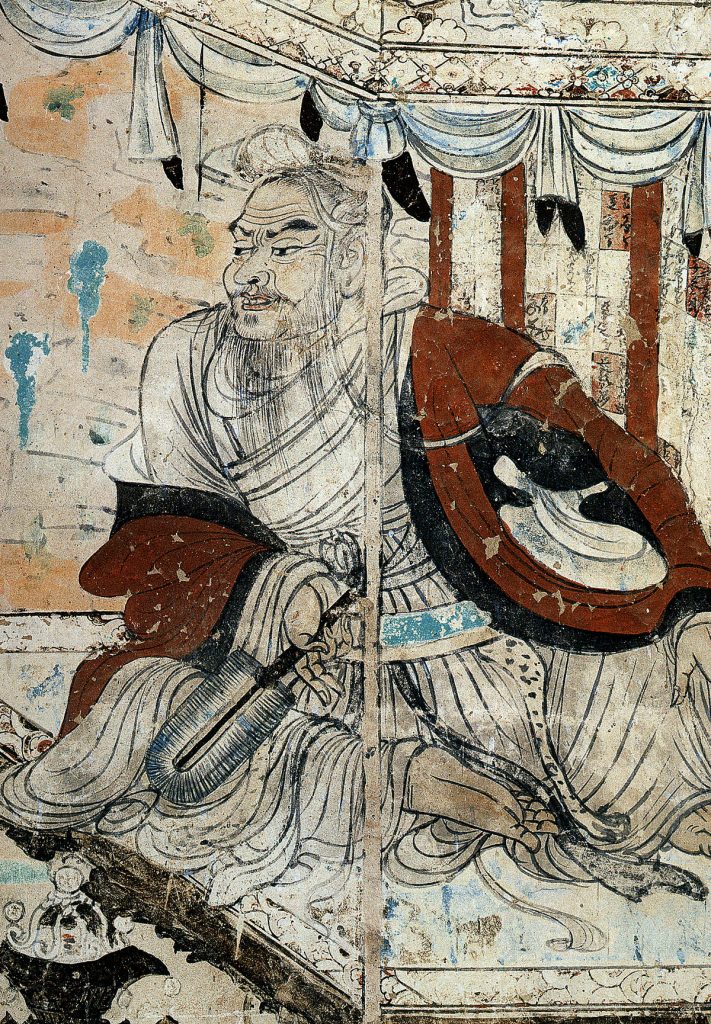 “Some of these caves have Ganesh and Shiva right next to Buddha right next to Chinese weather gods. You feel the thrill of all these cosmologies coexisting, intersecting and interpenetrating,” says Sellars.

“First of all, you can’t perform in the caves anymore, and in fact, only a handful of people are allowed in. You don’t want to disturb the caves any more than they’ve been disturbed in the intervening 15 centuries,” He continues. “I’m creating performances elsewhere in the world that is Dunhuang outside of Dunhuang. Reconfigure the experience in another geography, in another land. It’s creating a global conversation.”

Sellars helmed the world premiere of John Adams’ opera Nixon in China for Houston Grand Opera in 1987. Last year HGO revived the production. “That piece has all kinds of interpretations by all kinds of people, and it’s living its life quite independent of me, which is marvelous. It’s now a thirty-year-old classic in its own right,” says Sellars.

“I’m very — when I was young I was very influenced by Chinese opera. I made my first trip to China in the early ’80s. These performers would be singing and dancing at the same time. It was breathtaking,” he says. “Then my first job back in America was working for the National Theatre of the Deaf. Everything had to be signed. Sign language is so expressive.”

Sellars work in film includes directing several movies (many for television) including The Cabinet of Dr. Ramirez (1991), a modern reinterpretation of the silent classic The Cabinet of Dr. Caligari. Sellars also starred in Godard’s 1987 King Lear.

“I admired Jean-Luc Godard more than anyone else. And then, amazingly Tom Luddy, who heads up the Telluride Film Festival, was producing King Lear and asked if I could help out. I know that play pretty much backwards and forwards. So I showed up to meet my idol,” says Sellars. “His entire crew was two guys working the camera, one guy to work sound, and one other guy. And they made a huge looking film with just that crew. It was powerful and ambitious but not made with a lot of money – and that’s before we could make a movie with our cellphones.”

Peter Sellars appears at the Asia Society, Texas on December 7, at 4 pm. with the program “Dunhuang Foundation Presents an Evening with Peter Sellars.”