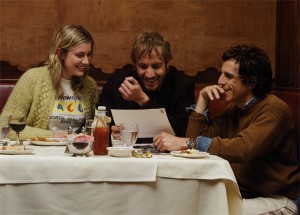 You remember in the movie Swingers how Vince Vaughn tells Jon Favreau he doesn’t want to be the PG guy that everything turns out okay for, he needs to be the R-rated guy that you don’t know if you really like, you don’t know how he’s going to end up. Well, Ben Stiller as Greenberg is that guy. There’s not much to like about the misanthropic character played by Stiller yet it’s Noah Baumbach’s easiest to like film, perhaps not an odd accomplishment considering the nihilism and sarcasm dripping from the populace of his two most recent films The Squid and the Whale and Margot at the Wedding. Baumbach also collaborates with Wes Anderson but those films, particularly Fantastic Mr. Fox, are infused with Anderson’s own special brand of altruism.
In Greenberg, Stiller playing a guy that’s a kind of dick, attaches himself to people with esteem issues; he goes out on a date with his brother’s personal assistant and 15 minutes into the date he’s eating her pussy. Greenberg’s not so much of a womanizer as he’s a sort of psychic vampire, sucking talent and inspiration away from those around him. This becomes readily apparent as the movie progresses and we meet the members of Greenberg’s former band that he abandoned on the eve of signing with a major label.
Stiller has stepped up to the serious movie acting plate in the past (Permanent Midnight, Zero Effect, Royal Tennenbaums, Your Friends & Neighbors) and much of the appeal of Greenberg rests on your, well, not liking his character. Don’t be surprised if you find yourself recognizing in Greenberg’s solipsism parts of yourself you’d rather keep submerged.