Leon casino, In anticipation of the upcoming 2018 mid-term elections, Free Press Houston will be regularly interviewing the various candidates seeking office in and around Houston. This week, we have Silky Malik, a Democrat running for the soon-to-be-vacated seat held by Ted Poe in Texas District 2.

Free Press Houston: Let’s jump right into it. Your website’s a little vague on your platform, so what are the top three things you want to do as representative of District 2?

Silky Malik: I think that pushing for the repeal of the teacher tax is going to be very important. We’re seeing that a lot with the tax reform bill that was just pushed through. I think a $250 deduction for teachers is a joke. They should be rewarded for everything they do for our kids, not punished for it. We want to make sure they can write off out-of-pocket expenses. They easily spend $500 a year on their classrooms, if not more.

A big part of that is eliminating the Windfall Elimination Provision. You have people on both sides of the aisle acknowledging that it is the most regressive part of the tax code. We’re cutting social security benefits in half, and they’re being punished for putting money in they’re never going to get back. That’s wrong. I come from a line of teachers, and to me it’s obscene and abhorrent.

Like most of us I’m opposed to this GOP tax bill. It’s obvious they’re making education a burden. Going to college is going to feel like a punishment to so many people. If we’re not going to pay for education then let’s at least make it a way to deduct the cost and save more. For every dollar they’re borrowing they’re paying $1.50 back.

The third one would be a focus on healthcare. I think it’s the most salient issue across the country. Roger Goodell is the commissioner of the NFL. He’s out there negotiating a $50 million contract, and the thing that stuck out to me the most is that he is still trying to insure lifetime medical care for his family. Dude is going to have more money that most people ever in the world and is still saying, “I’m going to need to make sure I still have that healthcare.”

It’s been great. More and more people seem to think universal healthcare sounds feasible. It’s no longer this crazy, socialism, going-to-destroy-capitalism idea. But it’s not going to happen overnight, so we need to make sure that we work on keeping the Affordable Care Act working for people. My father-in-law was able to get heart surgery that saved his life because of the ACA. We need to make sure that people don’t go from paying $100 a month to $500 a month with a $1,500 deductible they’re never going to make. It’s just fake insurance. 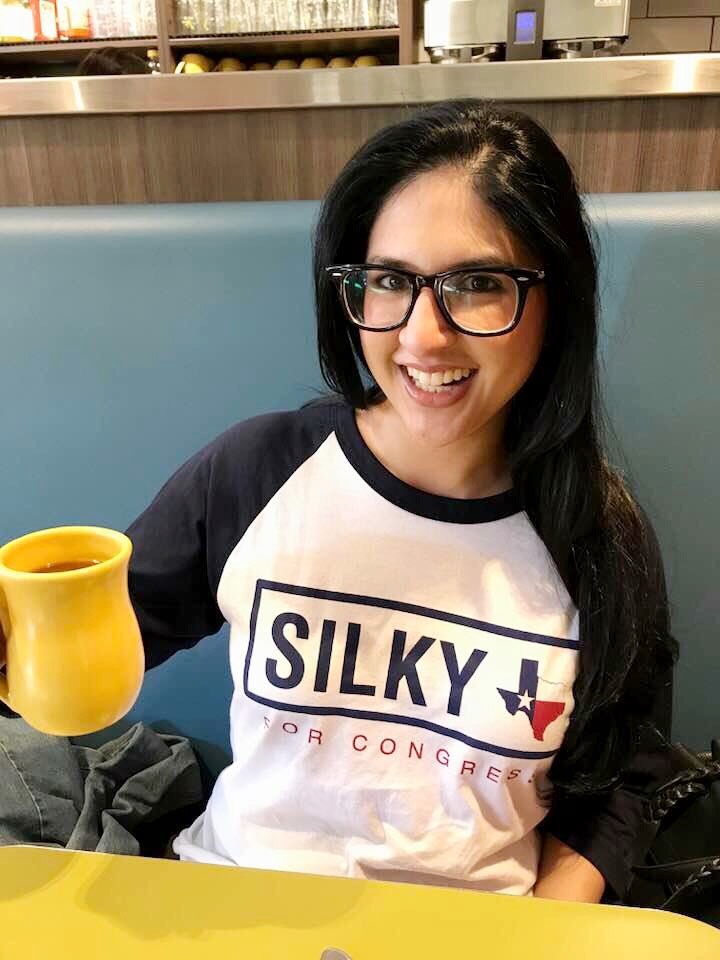 FPH: Were you inspired to run by the fact that Ted Poe was retiring or had you already decided to throw your hat in the ring?

SM: I’d been thinking about this since late last year. It felt like a more uphill battle than I think it is. I wanted to know, can we turn this district blue? Can we take it back? I started to think, yes, this is feasible. I was waiting for a candidate, and it didn’t happen, so I started laying the ground work.

I was attending some training in Washington D.C., and the non-profit nature of the organization made it so that I couldn’t declare until after I had finished. That pushed me off for at least four or five weeks. I was in Washington when I heard Poe was resigning, so I called my campaign manager and said, “This is great timing!” I know how hard beating an incumbent can be. I think people are tired of representatives who are screwing them over.

FPH: Texas, especially Texas Democrats, have a terrible reputation for turning up to vote in the mid-terms. How are you planning to combat that?

SM: You have these people who are the political insiders. They know about the mid-terms, they know about every election ever. The people I know, my friends and family? They don’t know about that stuff. The people who are in the know aren’t really talking to them. I’m small potatoes, and all those people not in the know are probably small potatoes, too. They don’t know that they have skin in the game, that there are people like them who are running and who care.

The thing I’ve been trying to do is show up to every non-political event I can, and just talking to regular people. I have this wonderful network of family and friends, and I ask them, “Who do you think I need to talk to?” I go join them. It’s different than sending a mailer out to 15,000 people. Normal people don’t know what’s going on. They don’t know who’s running, or if that person is similar to them. It makes me really excited that normal people might actually give a crap that a normal person is running for office.

FPH: I know you’re down in Montrose and I’m up here in Jersey Village, but still in your district because gerrymandering-

FPH: A lot of the people here work in the Energy Corridor. They come over from India and Korea and Scotland and whatever. The oil and gas industry is pretty depressed right now, and that’s having a big impact on the local economy. Do you have any plans on what can be done to address that?

SM: To be honest I’m not entirely sure how to address that. I think the overall goal is to listen to what people are saying. The tax reform bill is going to be very impactful. If they’re immigrants they’ll have other things to worry about. I will have to think on this and get back to you.

FPH: What do you anticipate being your biggest obstacle here?

SM: I think we’re going to have a very interesting primary. I like big primaries. I think people should have to bust their asses for those votes. When we make it through the primary I really feel the Democratic Party will come together. Just like in Texas 7. It’s going to be a bloodbath. I really like grass roots organizing, and that’s easier once you have tons of people throwing support behind one candidate.

I’m running because I think I can win the general. The people I’ve talked to are excited that someone is willing to take a stand, and to admit that they don’t know everything but are willing to learn. I’m the candidate I would want to see running.

FPH: Is there anything I didn’t ask I should have?

SM: You did not ask me how I plan on turning this district blue.

FPH: I did not. So, how do you plan on turning this district blue?

SM: There are two ways a person running for this seat can play it. The first is running a Republican-like campaign, play it close to the center. Maybe you’ll pull 20 percent of the Republican vote. Then you’re at a 50-50 toss-up. I’m definitely not that sort of person or candidate.

What we want to do is look at the largest group of voters, non-voters, and activate them. If nothing else, even if I don’t win but I get more people to give a crap about what’s going on, that’s a huge victory. It’s idealistic, but it’s very important. I think people are tired of these milquetoast candidates and why Democrats can’t win these freakin’ seats. They play it too close to the center. We’re not close to the center. We have no interest in being close to the center.

Is there a candidate you want us to talk to? Drop Jef a line.