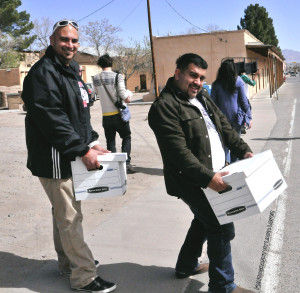 Leon casino, Picking up where I left off in my last post, still in San Antonio, the caravan heads to the Gallista Art Gallery, where we are served up a delicious vegetarian meal by two Caucasian Hari Krishna men-one of whom speaks with a European accent.  That’s right, we stop at a Chicano art gallery to eat Indian food served by Europeans: multicultural America at its best!

And here is a disclaimer: I will continue to refer to people’s race and ethnicity as I write on this topic because that’s what this is about-multiculturalism, which (to me) means honoring and celebrating our different histories and contributions to the culture of the United States and the world. This is probably a good place to post one of my first tweets from the caravan:

On the other side of this are the one-way assimilationists-opportunistic politicians like Arizona’s Russell Pearce, John Huppenthal, and Tom Horne-those who quote MLK and claim to be “colorblind” but whose real agenda is to use a fabricated, infantile version of history to beat the rest of us into submission, to give up our own rich heritage-not to mention what we know to be the truth-in favor of  their “superior,” bleached and sanitized United States of Everything is Hunky-Dory (and Always Has Been), Next!

Next stop after the Gallista Gallery is the Guadalupe Cultural Arts Center where a standing-room-only crowd of 350+ greets the evening’s entertainment-more banned authors.  The ever-quotable Tony Diaz kicks things off by saying, “When Arizona tried to erase our history, we decided to make more, ” then reads this quote from banned book Message to Aztlan: The Selected Writings of Rodolfo “Corky” Gonzalez:

“If you would repeat some of the words of the Declaration [of Independence] to [the average American citizen who watches Archie Bunker, who is getting fat in front of the TV drinking Coors], they’ll think that it’s radical, they’ll say it’s communist, they’ll say it’s socialist, and they’ll say it’s un-American.”

Watch this video of Sandra Cisneros reading from her banned book, The House on Mango Street.  It’s a sweet little vignette about a group of little girls who go for a walk around the barrio in their mothers’ fancy shoes.  How frightening!

Next update-on to El Paso’s historical Chinatown for more sexy, “subversive” literature!  In the meantime, enjoy another one of my tweets:

THE ONLY GOOD LAWS IN ARIZONA ARE THEIR CHOLAS #librotraficante

Oh! And dig this-Revenge of the Nerds was filmed in Tucson!