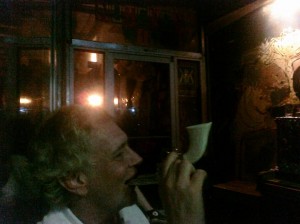 When the night of the slam arrived Mary Jane’s played host to dozens of poets as well as Farrell himself and Marc Smith, the Chicagoan who developed the concept of a Poetry Slam. As local musician, poet and playwright Clyde Richardson described in a 2005 interview, “Malcolm won the slam hands down. He performed a poem about a serial killer that Perry Farrell bought for $5,000 on the spot, but he turned down the tour.” Richardson explains that Malcolm’s decision was based on the fact that he didn’t want to spend three months on tour performing in places like Clarkston, Michigan or Bonner Springs, Kansas. “He told Farrell ‘I’ll meet you in Seattle.’ Since I came in second I got to go on tour with Lollapalooza,” Richardson said as he flipped through the Lollapalooza 1994 poetry anthology to his piece about birth control. In 2009 Malcolm stated that Farrell did option the poem but explained that it was a 10 year option and the rights reverted back to him in 2005.

Malcolm’s statement about meeting the tour in Seattle was a little odd, since the tour didn’t actually have a Seattle date scheduled that year. The closest Lollapalooza came was performing in Surrey, British Columbia—120 miles north. The only dates scheduled in the US portion of the Pacific Northwest were August 31 and September 1 in the small, western Washington town of George, Washington. However, at the time Malcolm’s mistake was understandable, after all Nirvana were scheduled to headline the tour that year. And Malcolm was rumored to have a special affinity for the kings of grunge.

Various accounts over the years have indicated that Malcolm may have had a crush on Kurt Cobain. It is even speculated, by those who speculate about Malcolm, that he met the man who would go on to be described as the voice of Generation X in 1991 when Nirvana played Houston’s home for heavy music—The Vatican.

A year after declining to go on a fully-funded-tour of the US, and parts of Canada, Malcolm set out on a much more low-budget-two-week-tour of the East Coast with nine other Houston artists, including Jim Pirtle, later of Notsuoh’s notoriety, Kevin Jackson, who had played in Grindin Teeth and was known as an experimental musician, but who would later go on to help found Houston’s best known pirate radio station Radio Free Montrose, and Nestor Topchy, one of the creators of Zocalo and its predecessor TemplO.

Christened the Zocalo Mobile Village, the tour featured a 1971 school bus, recently purchased from the Texas Department of Corrections, which had been painted pink and yellow and modified to accommodate a 25-foot by seven-foot stage on its roof; Topchy also included multiple gasoline generators to provide an onboard power supply for the myriad of electronics, theatre lights and public address systems that were shoehorned underneath the seats.

In Brad Tyre’s memorable article Got on the Bus he recounts how, despite the heavy modifications, the bus was far from roadworthy. He describes how once the bus left the Zocalo compound, two acres on Feagen Street that Topchy leased for $400 a month from Harris County DA Johnny B. Holmes Jr., and pulled on to Washington Avenue “it was realized—too late and yet awfully early—that the turn signals were inoperative and the brakes were questionable,” two statements that, when taken within the context of building a 25 foot stage on top of the bus, epitomize artists’ priorities.

There were also issues with the personalities selected to go, not the least of which was Malcolm. Tyre writes that, even before the bus had left Houston, Malcolm insisted “on challenging every personality characteristic of every member of the entourage, just to see if he [could] make them cry.” The performances are almost impossible to describe, simply recounting how Pirtle sang a karaoke version of “If You Go Away,” Rod McKuen’s English translation of “Ne me quitte pas” by legendary Belgian singer/songwrite Jacques Brel, while Topchy, dressed in pajamas and white face paint, climbed a knotted rope tied to a 30 foot aluminum tripod doesn’t do the participants justice.

Stating that by the end of the song Topchy had reached the top of the tripod, where his mugging face was captured by a video camera and the signal was then looped into a projector and broadcast onto a screen behind Pirtle, who was writhing around beneath a stilt walker is superficial. It ignores the fact that simply linking up a camera and a projector in 1995 was a feat in and of itself; it also ignores that in 1995 a video projector was a very high-dollar item. The cost of the projector leads to questions about how a group, described at the time as a bunch of “starving artists,” were able to afford something that retailed in the tens-of- thousands-of-dollars range.

Glossing over Pirtle’s use of condiments in the performance, mayonnaise as face paint and drinking salsa during the show, without discussing why he used them to induce vomiting ignores Pirtle’s personal history as the child of neglectful parents and how he would induce vomiting to garner their attention and affection.  Simply stating that, at the end of the show the audience was invited onto the bus; and once there they were served coffee while Malcolm, accompanied by an acoustic guitar, read them poems dismisses the sardonic beauty of inherent in Malcolm’s piece “Jesus comes to the Ft. Worth mall.”

To paraphrase the humorist Martin Mull, writing about art is like dancing about architecture; it fails to capture the essential essence of what happened. Simply describing the performances doesn’t represent the trials and tribulations of life on the road, one example that Pirtle and Malcolm shared in the summer of 2003 was how the bus’ brakes went out in DC. Over drinks and in between fits of laughter Malcolm and Pirtle remembered how Topchy had to drive the entire 64-miles of the I-495 Beltway to lose enough speed to exit and Tyre was, understandably, afraid for his life. Recounting 16-year-old performances without including what the audience experience and what they thought about that experience does a disservice to both artist and audience.

Tyre’s attempted to do so in his article, when he wrote that the group received mixed reactions; ranging from New York art establishment types calling it utter shit to art students thinking it was the greatest thing they’d ever seen. However, those are just the documented reactions. There is a rumor, spread by Malcolm, that at the end of the tour first-term New York City Mayor Rudy Guilliani gave the group the Key to the City. Strangely no one else has ever come forward to substantiate that story.

The lack of any form of substantiation makes something like receiving the key to New York City easy to dismiss, but other claims, by their very nature, are harder to dismiss because they are harder to substantiate. It’s easy enough to prove that no one on the tour died, but it’s not so easy to prove what Malcolm did or happened upon in the months following the tour.

Next: Turn of the Millenium and beyond

“Dunkirk,” “Valerian” and “City of Ghosts”

I Am Job: Listings for End of July