Posted by: Laura Coburn August 5, 2013 in Featured Leave a comment 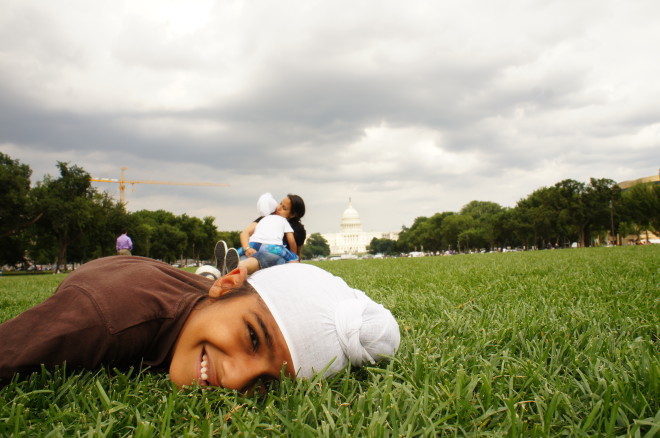 I swear he’s the cutest thing I have seen.  His eyelashes hit the top of his eyebrows, then on top of his eyebrows is his the start of his patka, or child’s turban.  He holds his head up high as he goes to our Gurdwara in Houston, and recites our hymns.  He is actually excited about being a part of the Sikh religion.

However, it changed for him on August 5, 2012.  For Sikh Americans, it is one of those days you remember. That morning, I was herding my kids to a birthday party when I caught images of Sikhs on television. I saw people crying, helicopters hovering, and inaccurate information about Sikhs being presented.  It was clear to me that the reporters had no idea about who we are.

The shooting at the Gurdwara was horrible. We panicked as a community.  I thought about my beautiful son who looked at me with those eyes, asking me about what was happening to Sikhs across the country.  I began providing interviews, saying the same things to anyone who would listen: Sikhism is the fifth largest religion in the world with 20 million followers; we are distinct because of our articles of faith, our identity; men (and some women) wear turbans; we believe in equality for all people; we fight injustice; we believe in one God and in fact, we think that everyone is on different journeys to the same destination.

The next thing I knew, a week went by. Typical of our Sunday routine, we were back at our Gurdwara in Houston.  But, our community was different this time.  As usual, my kids played with other turbaned Sikh children, allowing them to feel that they are not alone.  And then, when I was on my way to a meeting about community affairs and interviews regarding the Oak Creek shooting, Mahnek grabbed my hand and asked where I was going.  When I told him, he wouldn’t leave my side.  He was scared.  Before Oak Creek, our Gurdwara was always our safe haven.  When my son would not leave me in even our safe place, I challenged myself to make something positive out of this tragedy.  We were going to use this as an opportunity to educate our fellow Americans.  I was not going to allow Mahnek to live in fear.  I asked him to sit with his friends and write a thank-you card to Lt. Murphy, the brave police officer who helped save other Sikhs.  He wrote, “Thank You Lt. Murphy.  You are brave.  You are a hero.  My name is Mahnek Singh.  I am six and a half years old.  I want to say thank you because you risked your life for my brothers and sisters.”  Maybe it was therapeutic, because it worked to help deal with his fear, for the both of us.

A year later I am wondering where we are now.  How much more do people know about the Sikh religion?  In 2009, I was apart of the few Texans that went to Austin, Texas and asked the Board of Education to include the 5th largest religion in the social studies textbooks of 6th and 10th graders.  They included it.  But because of funding issues, the new textbooks have yet to be printed.  In the interm, the most diverse sikh schools started calling us to conduct presentations to fill in the gaps.  We have.  It is pretty cliche to say education is key, but I believe it.  Telling people about Sikhism helps disarm and can eliminate hate.

Being a native Houstonian and going through the rigors of being misunderstood helps me realize what little it really takes. As a mother, I understand that childrens’ curiosity can help drive out fear of the unknown.  So, at the beginning of each school year, I go to my kids’ classroom and take off their patkas to show their classmates their long flowing hair. I hope I can eliminate this fear in these young minds so that these young kids grow up to help defend my children against unwarranted bias. Indeed, education is key to stopping the cycle of hate.

The Future of Houston Children: An Interview with the President of CHILDREN AT RISK, Dr. Robert Sanborn