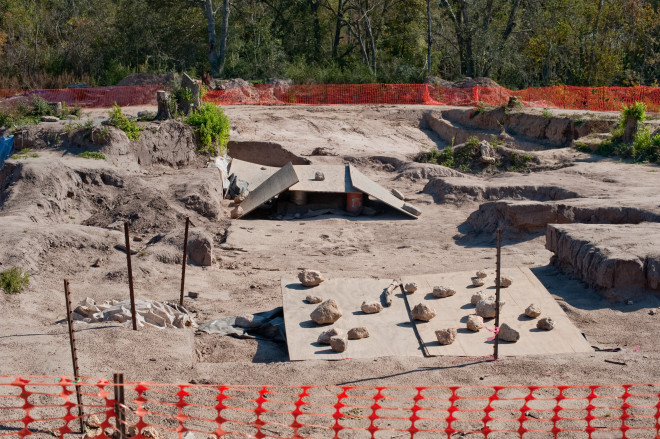 The photos included in this article provide a visual overview of just a small portion of what this expansion represents: sacred land being desecrated for the sake of corporate development. In these photos, you can see the beginnings of that development, as well as the ways in which this historic ground is being sacrificed.

Once upon a time, there was a sprawling city that lacked viable public transportation.  The main reason that city was both sprawling and lacking in public transportation is because it had been run, for decades, by short-sighted oilmen, real estate developers, and construction contractors.  Those oilmen, real estate developers, and construction contractors made vast sums of money-more money than they could count, more money than they could spend in consecutive lifetimes-and they spent that money buying politicians who would tax the people and funnel even more of that “public revenue” their way, by taking money out of mass-transit coffers to build publicly-funded highways to their far-flung developments where people would be forced to drive (and thus burn gas).

When it is completed, the Grand Parkway will be the longest “ring road” (i.e., loop or beltway or bypass) in the world.  It will span 180 miles and cross seven counties.  It will have a radius of roughly 40 miles from downtown Houston.  Both Katy Mills Mall and the Cypress outlet mall will be inside this loop.

You may have read about the construction of Grand Parkway’s “Segment E,” which connects Katy to Cypress (en route to the Woodlands) in the FPH “Worst of Houston, 2012 Edition.”  You may have also read about Exxon’s plan to move their corporate headquarters from downtown Houston to the Woodlands in the same issue of FPH.  What you may not know is the connection between the two.  The Grand Parkway is that connection.

Earnest studies for Grand Parkway construction began in 1996, at which point a statutory archaeological survey found a site along the proposed path which contained spear tips and other tools made of extinct buffalo bones.  This means prehistoric humans had been there, and it made the site eligible for inclusion on the National Register of Historic Places (NRHP).  The site was named 41HR796.  The Army Corps of Engineers gave the Texas Department of Transportation (TxDOT) two options: they could avoid the site or go right over it. TxDOT chose the latter.

Fifteen years passed, during which both the local and national economies went through many ups and downs. Gas prices rose and fell and rose.  The Grand Parkway started seeming like less and less of a good idea-it could possibly lead to massive flooding, nobody really lived along its path, it threatened the ecologically-important Katy Prairie, and the state didn’t have the money.  Harris County backed out of it altogether.  (For more details on the many trials and tribulations this project has encountered, read Raj Mankad’s excellent, thorough article, “A Heartbreaking Loss,” on the CITE magazine blog, offcite.org.)

Then, on January 27, 2011, Grand Parkway President William Burge said at a meeting of the Texas Transportation Commission, “Exxon…will go on record sometime in April that [the Woodlands] will be their home campus…and obviously they need that [freeway] in place.” 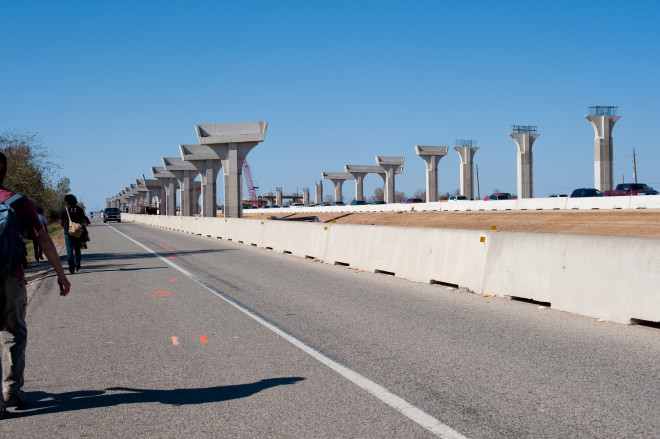 Construction on Segment E, which goes halfway to connecting the Energy Corridor near Katy to Exxon’s new headquarters in the Woodlands, began in September 2011.  In May 2012, after 16 years of knowing about the potential archaeological significance of 41HR796, the state began an earnest archeological survey of the site.  (This is required for any site which is eligible for inclusion on the NRHP and which may be affected by a federally-funded project.)  It is worth noting, too, that the state purchased the right-of-way (land) for this stretch of SH 99 from Bridgeland Development, a Maryland-based real estate developer, for $10 (albeit under threat of eminent domain), which, to me, echoes of Frank Sharp’s Sharpstown corrupt development dealings of the 1950s.

Soon after excavation began, human remains were found.  First one set, then another.  At least 14 different sets of human remains have since been found at 41HR796, buried alongside objects from hundreds of miles away, spanning multiple time periods from as long ago as 14,000 years and as recently as 2,000 years.

This site shows human habitation in Harris County possibly dating back 14,000 years, according to Dr. Kenneth Brown, professor of anthropology at the University of Houston.  It has the potential to finally disprove the “Bering Strait Hypothesis,” which posits that humans migrated to the Americas exclusively across a land bridge from present-day Russia to Alaska during the latest ice age.  It shows that various groups of people camped there and buried their dead there, alongside implements gathered from a wide area, for thousands of years.  It potentially proves a level of sophistication which many are not prepared to afford to “savages.”

Finding human remains is a game changer.  You can’t just claim eminent domain and pave over a graveyard-there are laws in place against that. And ancient Indian burial grounds?  Forget about it.  Those are protected by the Federal Native American Graves Protection and Repatriation Act (NAGPRA).

So, the Texas Department of Transportation did the bare minimum required by law (and even that is debatable).  They did not reroute the unnecessary freeway, as they likely would have done for a Civil War cemetery; they sent an email to the Indian tribes whose ancestors lived or passed through Texas (the remains at 41HR796 predate any existing tribe) and then applied to a local judge for permission to let them get the bones out of the way so they could get on with construction.  A hearing on the matter was held on September 10, 2012 in the 234th District Court of Harris County.

In court records, Judge Reece Rondon shows clearly that he is not an unbiased arbiter. At one point, he asks Dr. Brown what length of time would be necessary to do a proper study of the site. Dr. Brown answers that a period of two to three months would probably be sufficient. Judge Rondon then asks Dr. Brown, “So at the end of three months, is it possible that we continue to build this road?”

Judge Rondon’s use of the first-person plural pronoun in phrasing that question shows that he identifies with the road’s proponents.  Judges are not supposed to identify with either side.

That Judge Rondon considers this a trivial matter is further demonstrated by the way he rushed the hearing.  This entire hearing, which decided the fate of the potentially oldest multiple-burial site in all of North America, which could have caused the reappraisal of long-standing theories of human migration to the Western Hemisphere, began at 2:30 p.m. and ended by 3:49 p.m.–a mere hour and 19 minutes. That trivializes the import and gravity of the issue.

That TxDOT wants this story to disappear is also evident. At the same hearing, TxDOT’s staff archaeologist, Scott Pletka, refers to “unfortunate media attention.” I have no idea why Pletka might consider the media attention site 41HR796 received prior to the hearing “unfortunate,” because not one of the handful of articles that had been published at that time were the slightest bit critical of the project. It seems to me that Pletka and TxDOT consider ANY media attention, and therefore any public knowledge of their attempt to pave over this important site, “unfortunate.”

But what do they have to hide? Why the seemingly deliberate attempts to quietly destroy not just the sanctity but also the scientific integrity of this site?  In some reader comments beneath the few Houston Chronicle stories on site 41HR796, commenters say things like, “Why dwell in the past? Why stall progress for the sake of ancient [history]?” To them I would say that this is not necessarily “progress” and this historical knowledge has political implications for the present and the future. 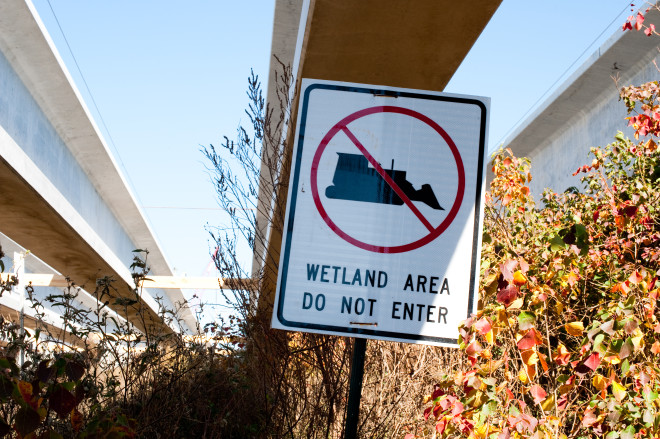 Judge Rondon ruled in favor of TxDOT, and the Harris County Historical Commission (HCHC) appealed.  All they asked for was a three-month stay to do a proper, by-hand excavation.  TxDOT has chosen, instead, to perform a mechanical excavation of the site, which pretty much destroys the scientific validity of the data.  A lawyer from HCHC who witnessed the excavation in late September 2012 (after the hearing) said that mechanical sifters were shaking the excavated earth so vigorously that bolts were flying loose from the machine.  That is some sloppy excavation which is going to render data that will be interpretable as “Yup…that’s old,” without being able to pinpoint exactly how old.

Finally, the six nations with the legal authority to intervene have been lied to by TxDOT. TxDOT has told them the site is protected by a guard, on-site, 24 hours a day and with a chain-link fence.  I visited the site on a Sunday morning and faced absolutely zero impediments by the guard on-site. Instead of a chain-link fence, I saw flimsy orange construction netting. TxDOT has also told the tribes that the graves are covered with heavy, steel construction plates. No such plates exist–the graves are covered, if you can call it that, with plywood boards, propped up with orange five-gallon Home Depot “Homer” paint buckets and weighted down with stones.

The six nations have come to an agreement with TxDOT.  The remains will remain where they are, be covered with a protective concrete barrier, and will be designated as a cemetery.  The road will still be built, and the scientific integrity of the “data” contained within has already been rendered useless.  But wait-don’t fairy tales have happy endings?  No.  See you in traffic! 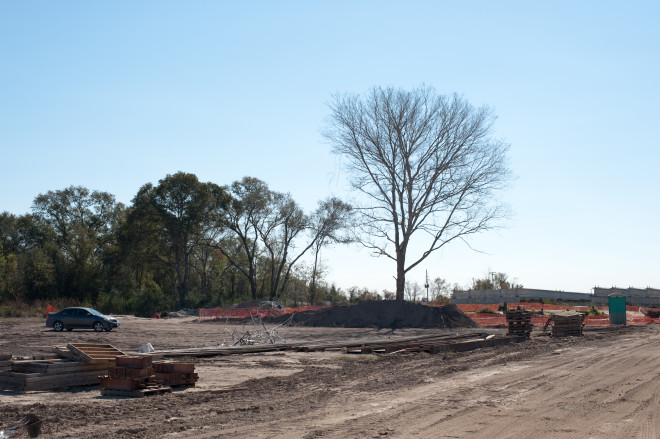