Added on February 8, 2016  Michael Bergeron  All the Way , alley theatre , LBJ
No Comments

All the Way with LBJ

Decrease Font Size Increase Font Size Text Size Print This Page Send by Email
What: All the Way, written by Pulitzer prize-winning playwright Robert Schenkkan. A chronicle of the 11-months of the Lyndon Johnson presidency from his swearing in after JFK’s assassination in 1963 to his winning the re-election in November 1964.

Leon casino, Where: The Alley Theatre, running until February 21.

Why: A modern abstract staging positions the players on a mostly blank stage surrounding by marble columns and the president’s desk. The script highlights the bullet points of LBJ’s civil rights legislation and the battles in Congress that ensued. 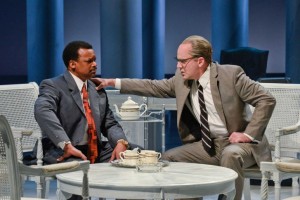 What Really Happened At Raven Tower?