Anime Matsuri: The Good, the Bad and the Ugly 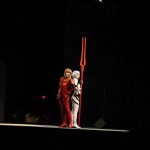 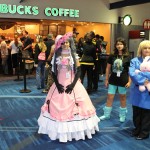 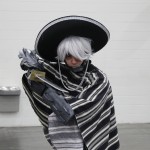 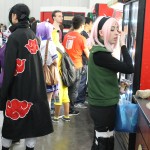 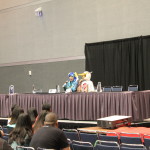 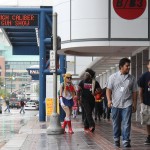 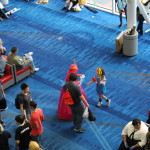 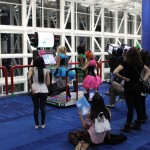 Nothing says “Texas” like a High-Caliber Gun Show held in the same building as an anime convention. Speaking of which, if you’re not into the anime/manga/cosplay scene, don’t dig Japan or don’t like anime culture in general, you won’t get much out of reading this.

Houston represented. It feels like I write that when covering most events. But it’s necessary in this context. People hear “anime convention” and think geeky, blonde, middle-class urban teens with store-bought costumes. Well, there were a few of those, and everyone else. Houston has everyone after all. Some wore expensive custom-made costumes. Many had on a simple t-shirt with the name of their favorite manga or show. Married couples brought infants dressed as comic book characters. Grandparents from the Woodlands chaperoned their kid’s kids. Gun Show patrons stepped on the same sidewalk as the otakus, and, aside from a few odd looks, did not shoot them. It was a testament to the fact that anime and Japanese culture is as much a slice of Houston as any other part.

The fans enjoyed the hell out of themselves as long as the authority figures weren’t there to screw things up. Case in point: Cosplay chess. A room  full of people used to being the center of attention. There they were. Organized. Taking turns. Not caring about being the class clown (except for a Mario cosplayer with a rather obnoxious sound effects speaker).

Music was legit, delays aside. The Japanese band Nightmare, the American band Eyeshine and the Japanese 24-year-old DJ Teddyloid were without a doubt the only reason thousands of people shelled out the $65 for tickets.

And it was money well spent.

For the rest of the three days, there was merchandise in the dealer’s room, panels of voice actors (and professional cosplayers) and some rather drawn out fashion shows and cosplay contests.

Delays. Delays, delays, delays. Panels get cancelled during a convention. Stuff happens. But Anime Matsuri this year was like Disneyland on day one: all the attractions malfunctioning and a lot of long lines.

This is unacceptable for the fourth largest city in the US. We’re supposed to be the biggest and the baddest. But we’re just the latter. If Anime Matsuri doesn’t improve, tourists and out-of-state otakus will no doubt skip their patronage (ergo, their money) for better regulated conventions, leaving locals with slim pickings (and Dallas, awful as that sounds).

Aside from a girl shocked to discover people like to grind during raves, (http://gendeerfluid.tumblr.com/post/79843567029/alright-i-know-yall-dont-want-to-hear-my-complain-about) one anonymous internet poster summed up the negative feelings of Anime Matsuri:

“This is the Matsuri cycle: Make a lot of promises, throw in a few big names, and make people pay out the [explitive] for everything. Lock down the convention center to make sure everyone pays for a badge. At this point, you have all handed your money over and they have no reason to keep any of their promises or deliver anything of quality because time and time again, people go back, despite being treated like crap. The sooner people get a clue and stop paying up, the sooner Houston can get a quality convention that actually functions for something more paying off outstanding debts.”

Then there was Johnny Law: some combination of HPD, Pasadena police (according to their uniforms) and “security” officers. According to the convention goers, the cops acted like the event was a riot. When they weren’t pointing and laughing at costumes, they barked orders left and right. Don’t use the stairs, it’s a fire hazard. Let me see your badge. Let me see the backside. No, the other backside. Google “Anime Matsuri reviews” and you’ll find oodles of people ticked off about the cops. Whether they’re legitimate in their complaints, I don’t know. Cops are cops. It’s their job to take flak for spoiling anarchy. And that’s an anime con in general: anarchy.

Let’s not end on a sour note. That quote came from an anonymous website (I’m sure you know the one). In the same page, someone else posted:

“This was my first con so I have nothing to base it off of, but I had a blast. I never guessed how easy it would be to talk to people in lines and stuff. I was a little pissed about how late everything was starting but most of the things were worth it . . . Overall it was a really fun experience for me and I plan on going back next year.”

Best way to sum up the con: Houston isn’t San Diego. We don’t have huge pull on the anime scene. Even if the event organizers are more worried about blowing profits on Hawaiian vacations instead of ensuring the quality of the convention, that’s OK. They’ll do better next year (or won’t have a convention to do).

2 Responses to Anime Matsuri: The Good, the Bad and the Ugly