Leon casino, Free Press Houston spoke to Richard E. Grant, who was in London about six hours ahead of Houston time, and he opened up about his latest film Dom Hemingway as well as his career.

Dom Hemingway’s director and writer Richard Shepard’s other films include The Matador and The Hunting Party.

Dom has been in prison for 12 years and never ratted on his contacts. For his silence he is promised a huge payoff. Grant and Law are traveling to meet the Big Boss and Law asks, “Do you think he has something to drink?” Grant dryly replies, “He was raised in a Russian orphanage, he kills people for a living. I’m pretty sure he has a full bar.”

For a scene where the actors are being hurled through the air in slow motion after a car wreck Grant recalls hanging by wires for a couple of days as they were photographed in various poses. “It’s different being suited up like that,” Grant said. “Maybe fun at first but then it’s serious work.” Another sequence involves a bet on whether Dom can open a safe in ten minutes. “We shot that scene for two days. The thing is Jude would knock down the wall the safe is mounted in with a sledgehammer and then the crew would rebuild the wall and we would shoot again. You wouldn’t believe the energy Jude had to muster.”

Grant got his break in acting with the film Withnail & I (1987) and as his credits will attest he’s worked constantly since then. Grant isn’t joking when he states, “I owe my career to Daniel Day-Lewis turning down the lead of Withnail so he could go off to do The Unbearable Lightness of Being.” Grant was part of a fraternity of actors from that time who had had parts on television shows and would see each other at more than one audition for film roles. That list would include Day-Lewis and Gary Oldman. 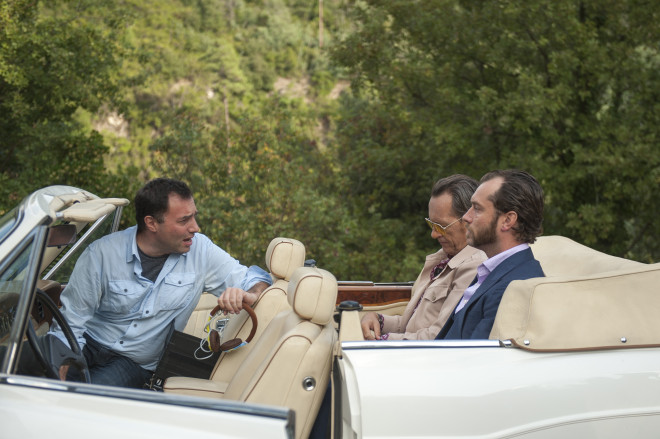 Grant has written two books about his experience in the film industry, “Wah-Wah” about a film he directed based on his early life in Swaziland and “With Nails,” which covers his career from Withnail & I through Henry and June, Hudson Hawk, Dracula, The Age of Innocence, The Player and up to the Spice Girls movie Spice World.

“My daughter was so happy when I did that film, she idolized the Spice Girls,” remarks Grant. But it wasn’t the first time Grant had been around rock stars. George Harrison formed the production company HandMade Films that produced Withnail & I. “Harrison was very low key. The first time I met him was one day on the film and someone came up to me and asked if I wanted to meet George. I turned around and he was standing alone behind me, just checking out the set. Very nice fellow.”

Grant’s book “With Nails” is hands down one of the best books written about movies in the last generation. Grant doesn’t judge the events so much as he writes about them in an unbiased tone that communicates the way movies actually get made.

Grant noted that he’s a devoted movie buff and tries to see at least five films a week. Recently Grant has been seen on the small screen in series as myriad as Girls and the upcoming season of Downton Abbey. Grant also appeared uncredited in last year’s time travel romance About Time opposite one of his Withnail co-stars Richard Griffiths.