Posted by: NickCooper August 8, 2013 in Featured, Local and State 1 Comment

By Nick Cooper and Harbeer Sandhu
Images by Arthur Bates

Protest Privilege
At the Trayvon March in NYC, I marched and drummed for three hours, and then we arrived at 42nd Street — Disney territory. The cops were setting up barricades, and I was pretty wiped out. So I packed up my drum and sign and appeared, once again, like a white adult. The cops didn’t even look at me as I walked through the opening in the barricade. I walked over one avenue and felt exhausted, so I hailed a cab. In a split second, the cab driver decided I was OK and pulled over. I had enough on my debit card to pay and tip him, and was soon home and in the shower. I read later that the marchers continued up to 125th Street, a predominately black neighborhood where the cops stopped being so gracious. I may not be racist, but I’m still privileged, even at a protest.

Leon casino, Those are the rules, right? Innocent until proven guilty.

I’m going to accept the verdict and assume the people who came up with it had a lot more information about the case than me.

Not necessarily — those jurors were sequestered, and much evidence was denied to them — you may actually have MORE information than they did.

Race Is A Social Construct

Race does not exist, genetically. Though appearance and skin color factor into our perception of race, it is a social construct with no genetic boundary lines. Racism, however, does exist, and in America we have a system based on white supremacy. It is so ubiquitous that many white people can’t see it. White people in New York wouldn’t notice that they aren’t being “stoppedand-frisked” while black people are. White people wouldn’t notice that their treatment by storeowners is different than the treatment of blacks. White defendants wouldn’t know that their chance of their homicide being ruled as justifiable under stand-your-ground or self-defense is much greater than black defendants. Why would they? To see these imbalances, white people have to look for them. 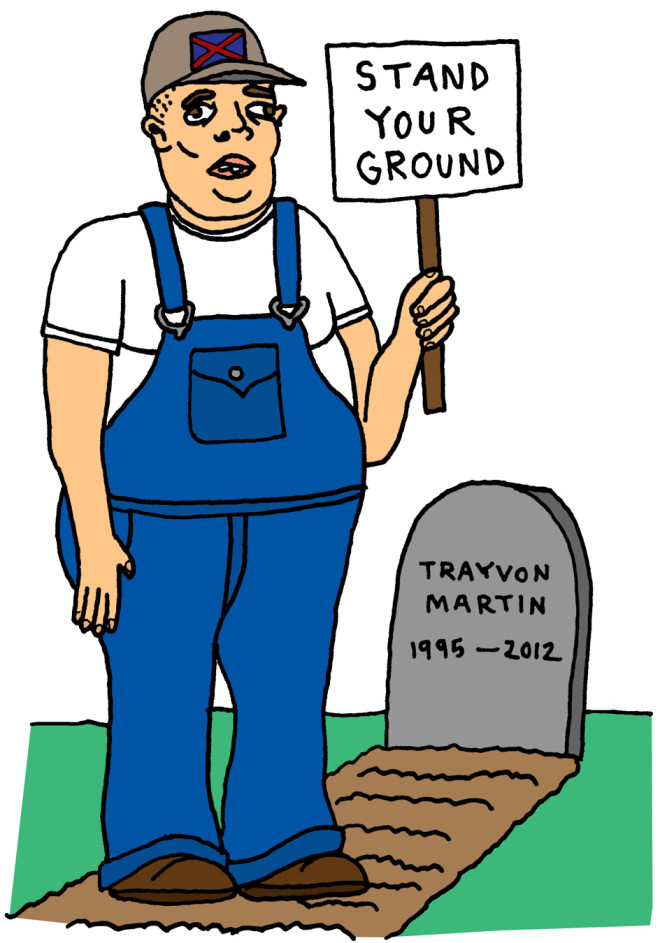 Knowledge Is An Impediment
[W]ho in the United States could have possibly NOT known who George Zimmerman was?…[T]he ignorance of these jurors was positioned as neutrality and in fact was what made them QUALIFIED to serve as jurors. It is the hallmark of our “post-racial,” “color-blind” society that the willful white ignorance that could make a person so unaware of how race/racism and oppression operates could be framed, in fact, as expertise. - Bree Picower, Ph.D., “On Juror B37 and the Willfully Passive Consumption of White Supremacy”

AC: I want to ask you about some of the different witnesses. Rachel Jeantel, the woman who was on the phone with Trayvon Martin at the start of the incident. What did you make of her testimony?

JUROR B37: I didn’t think it was very credible, but I felt very sorry for her. She didn’t ask to be in this place. She didn’t ask — she wanted to go. She wanted to leave. She didn’t want to be any part of this jury [sic]. I think she felt inadequate toward everyone because of her education and her communication skills. I just felt sadness for her…

AC: What did you think of George Zimmerman?

AC: Do you think he’s guilty of something?

JUROR B37: I think he’s guilty of not using good judgment.

Zimmerman’s heart was in the right place. Trayvon’s was right on target, too.

Dear White Supremacy, You brought black people here as slaves for hundreds of years. Then you kinda set them free but without rights for another hundred years. Then you were forced to give them some rights around voting and other things, but never addressed the unjust history. Then you elected a black president and simultaneously started taking away some of those rights again. Today, lighter skin is some protection from being profiled, stopped, frisked, imprisoned, and sent to jail for minor drugs charges. Black prisoners in the South are picking cotton in the same fields their ancestors worked as slaves. When a black youth is killed, he doesn’t get the same treatment that a white youth would. Black people and allies respond by peacefully protesting. You are annoyed about the protests and say, “They’re the ones with the racism problem. We’re already over it.”

ZIMMERMAN DEFENSE COMMENTS ON PRESIDENT OBAMA’S REMARKS
We acknowledge Mr. Obama’s remarks regarding the frustration felt by some when viewed in context of our nation’s history, which includes racial insensitivities spanning generations… Insensitivities, they say. Racial “insensitivities.” They are not wrong. That is indeed one way to describe kidnapping a people from their home, the Middle Passage, captivity, forced labor, tearing families apart, selling children downriver, beatings, rapes, mutilation, lynchings, the daily indignities of Jim Crow, and adding insult to injury by denying that these manifold “insensitivities” might have something to do with lingering, present-day poverty and violence in traumatized communities.
“These People Think Black Racism Against Whites Doesn’t Even Exist!”
Black discrimination against whites certainly exists, but without the power of a racist system tilted in its favor, it has little impact. A black father might dislike his daughter’s boyfriend for being white, a rap label or a reggae club might be uninterested in white artists, or an employer might prefer black workers. These scenarios are not insignificant, but they can’t compare to discrimination against blacks. Even black cops, prosecutors, and judges are harder on black suspects. Even black loan officers, landlords, and employers are tougher on black applicants. In our system, white households have 20 times the net worth of black households, black people go to jail eight times as much as whites for drug charges, and white people who kill blacks are far less likely than blacks who kill whites to get the death penalty.
WHY CAN’T BLACK MEN JUST LIFT THEMSELVES UP BY THE NOOSE-STRAPS LIKE THE FOUNDING FATHERS INTENDED???
“But Zimmerman Isn’t White!”
In the streets with a gun in his hand, and in court with legal fund donations from whites around the country, Zimmerman represented the machinery of white power. Zimmerman, like Obama and many other people of color, held a position in the white system. Throughout history in America, different groups have gained access to the ‘white’ designation by finding a role for themselves within white patriarchy. For example, Irish weren’t considered white originally, but they took on roles as police, enforcing white hegemony, and won access. Regardless of how long, Zimmerman will continue to be supported and protected by the white power structure, until now he has been its proxy. In 1956, one of Emmett Till’s (also acquitted) killers said in an interview, “I’m no bully; I never hurt a nigger in my life. I like niggers — in their place — I know how to work ‘em. But I just decided it was time a few people got put on notice.” Zimmerman’s family has asserted that he is not racist. It’s true that Zimmerman didn’t use the N-word when he said, “fucking punks … these assholes, they always get away,” but aside from the choice of epithet, what has changed? He told black Americans that white people can still harass them and shoot them even when they have no badge. 58 years after the murder of Emmett Till, we’re still acquitting men who kill black teenagers.
Only in America could a kid with a Peruvian mother and a Jewish-sounding last name grow up to be a creepy-ass cracker.
I Don’t *Play* the Race Card, I Am a Race Card *Driver. *
I am willing to go so far as to say that the verdict handed down was the “legally correct” verdict, but I cannot say that it was “right.” What would have been the right verdict? Manslaughter? If so, then perhaps we should blame the prosecution? The “right” verdict would be cold-blooded murder. Zimmerman hunted down that child like an animal. Clearly Zimmerman has got some mental problems, so I would feel like justice was served if he even just got committed to a mental hospital for life. As for “blame,” it’s the whole system. It’s that fucked up “stand-your-ground law.” It’s the selective application of that law. It’s the police in Sanford who did not even properly investigate this murder until massive community pressure came down on them. It’s the judge who did not allow evidence of Zimmerman’s previous record into court but did allow the defense to portray Martin like a hoodlum. It’s the half-assed prosecution. It’s the jury giving Zimmerman the benefit of every doubt. It’s the people who are sick of hearing about Trayvon. It’s all of us!
Changing Bad Laws Is Not Enough
Florida and Texas have problematic stand-your-ground laws that allow people to shoot others, even when they could have easily retreated, if they feel unlawfully threatened. The superior, and more universal principle, self-defense, allows the use of an equal and opposite force to deter an imminent attack. Both of these (along with not-guilty-by-reason-of-insanity) are granted unevenly by juries in our racist system. Getting rid of a few bad laws won’t fix things because the deeper problem is that a significant percent of people don’t give black folks the benefit of the doubt. Since the law was lenient to Zimmerman, it should be lenient to black people, too — like Marissa Alexander who got a twenty-year sentence in Florida for firing a warning shot at her abuser. Cops, security guards, juries, and the public give the benefit of the doubt to white people more than to blacks. When Zimmerman saw Trayvon, he didn’t see a kid coming back from the store, he saw trouble.
USA TODAY: After Zimmerman Verdict, Can Nation Heal Racial Rift?
The time to talk about healing would be after the abuse has ended.  “We wish things would just quiet down so we can go back to ignoring them,” is not a viable, long-term plan. This verdict is just the latest manifestation of an ongoing problem.  This verdict did not create a rift — it ripped open a festering wound.
2013-08-08
NickCooper
Share !