The Fight For 15 is a Fight for us All

Text and Photos By Jane Nguyen

I attended Fight for 15’s national action on Thursday, December 4th to raise the minimum wage and demand union rights for fast food workers. I have been at a lot of protests in the Houston area, and all of them have been for highly important causes, most of them concerning life-or-death matters. Well, many people believe that raising the minimum wage is not a life-or-death matter; quite the contrary, they believe the desire to make more than $7.25 an hour is an audacious, ridiculous, and unnecessary demand of undeserving people.

Yet, at this particular protest, the participants (most of them actual fast food workers themselves as opposed to just supporters of the cause) chanted with not just a passion I have not heard before but also with pain. I remember actually thinking, as I listened to one woman’s repeated roar-shriek-cry — “We can’t survive…on $7.25!” — that she sounds like someone in physical distress, like someone whose back is literally breaking.

The Fight for 15 is, in many ways, a life-or-death matter.

Two rallies were held in the Houston area – one at the Burger King at Westheimer and Montrose, and another beginning at Anderson Park near the corner of Richmond and Chimney Rock.

I attended the latter, which began at 11:30 a.m. We marched for several blocks, starting at the park and making our way to a nearby Taco Bell as well as a Burger King, stopping occasionally to listen to local leaders galvanize us with inspirational words of brotherhood, perseverance, and solidarity.

“It is a shame,” said Alvaro Rodriguez of the Communist Party in Houston, “that in Houston, one of the riches cities in the world with a large concentration of wealthy people, 1 in 4 Houstonians live below the poverty level.  This inequality also has a racist edge with 1 in 3 African Americans and Hispanics living below the official poverty level. We can help our economy by increasing consumer demand through higher wages.”

Lone Star College student, Brant Roberts said, “I’m here because I’ve worked many low wage jobs in my lifetime and I’m tired of struggling just to survive, despite the fact that I work full time.”

Raising the minimum wage is, indeed, crucial to the well being – emotionally, physically, and mentally — of millions across the country.

There have been times when I have just thought about people making merely $7.25 an hour, and it would make me angry and sad at the same time because I know how much I myself struggle to make ends meet making more than twice that an hour.

All I can think, then, is…what on earth are these fast food (and other retail) employers thinking? How do they sleep at night? And how do other Americans sit by and watch it happen?

Of course, the most common argument against paying fast food workers $15 an hour is that “fast food is not meant to be a career; you aren’t supposed to stay there for eight years, and you’re not supposed to be trying to raise a family off of minimum wage.” There’s also “I’m a college graduate and I just barely make $15 an hour. Why should people who haven’t bothered to get an education or better themselves make the same amount I make?” 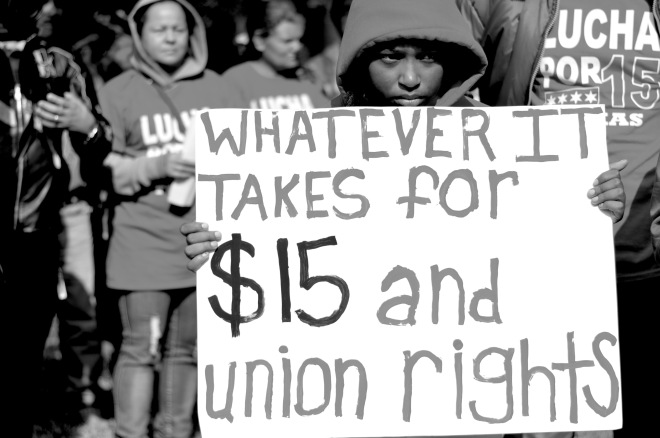 Fundamentally, too many Americans differentiate between “intellectual labor” and “manual labor,” putting the former unreasonably high above the latter. This is a misguided way of thinking. Both intellectual and manual labor are valuable – equally so. Our need for an academic article on postmodernism is no greater than our need for food preparation or having laundry done, windows washed, and bathrooms cleaned. Also, having worked, myself, at a Target store at one time (similar to fast food, in many ways; I was on my feet eight hours a day, operating a cash register, dealing with customers, and having to work “fast” at stocking shelves, putting away merchandise, cleaning, etc.), I can say without hesitation that I was as exhausted – if not more so- at the end of an eight hour work day at Target as I am at the end of eight hours of teaching college students, for which I had to get a Bachelor’s and Master’s degree. 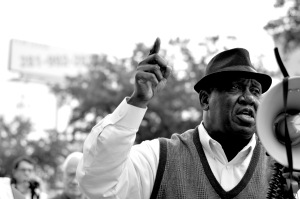 Furthermore, people really must get over the idea that nobody should be staying at a fast-food job or similarly low-paying retail jobs long-term. Why shouldn’t a person? What if one likes working in retail and/or fast food? What if one is suited for it?

I happen to be an adjunct college instructor who has similar grievances about low pay that stays virtually the same year after year while food at the grocery store goes up so regularly and dramatically that I am constantly shaking my head at having paid $2.50 for something one week and seeing it go up to $3.25 the next, with no notable change in size, amount, or quality of the product. Many would tell me, “Well, just leave your job if you don’t like it. Get one that pays more.”

But what if I like my job? (And I do.) I am suited for it and find it to be a job I’m happy in. Retail workers and fast food workers may similarly like their jobs and feel suited for them; they simply, like me, don’t like their pay and do not feel it is fair in light of the economic circumstances in which we live. Neither I, nor fast food workers, should have to give up the profession we have chosen, enjoy, and feel suited for, to be miserable in another industry, just to survive.

But even taking away the notion of the right to job preference, people have to wake up to the fact that, whether they like it or not, millions of Americans do rely on fast food jobs to make a living. Instead of grumbling about why you think they “shouldn’t be working there for so long,” why not just recognize the joke that is their wages as a reality that needs desperately to change, and change now? After all, if we only help solve issues that we think “should be that way,” or fail to improve situations that we tell ourselves we would never be in, we wouldn’t help women who have been battered by their spouses, we wouldn’t help alcoholics and drug users get over their addictions, we wouldn’t help children who have been bullied at school.

A country and its citizens cannot sit idly by while millions of people work a forty-hour work week and only make $1050 a month after taxes (which is what $7.25 hour at full time hours, if one is lucky enough to get that, amounts to.) In Houston, a one-bedroom apartment in even a run-down area is $600 to $700 a month. With $400 left after one has paid for a roof over one’s head, he or she may make a car payment of $300 and have $100 for gas. Zero left after that.

Basically, one doesn’t even have to be “trying to raise a family off minimum wage” for it to be way too low. The current $7.25 is not reasonable even for a single person with no children and no credit card or student loan debt.

It’s time for a raise for all of us.

Let’s Do More Than Taco ‘Bout It: Regarding Planned Parenthood