Leon casino, If not for Net Neutrality , you might never even see small, community-focused sites like freepresshouston.com.

Net Neutrality is the idea that the Internet is like the roads, waterways, and telephone lines. It transports stuff that people need. Proponents of Net Neutrality say that Internet Service Providers (ISPs) should be regulated as “common carriers” under Title II of the Communications Act of 1934. Common carriers are companies that can collect money for transporting things but they can’t discriminate. In other words, nobody should be able to bribe the gatekeepers and toll collectors to let them go faster or slow down their competition. 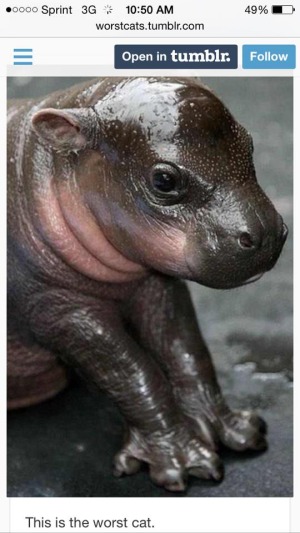 Would you even ever see http://worstcats.tumblr.com/ on a corporate Internet?

And isn’t that what makes the Internet great? Wasn’t that always the big promise of the Internet — that independent content producers like bloggers or school kids making YouTube videos could offer non-mainstream perspectives, could take risks and experiment in ways that big corporations could not even imagine? The two brothers who made Homestar Runner playing on a level field with Hanna-Barbera (not counting marketing budgets, of course).

The Internet has been a place where size does not matter, but that could soon change. Comcast is trying to merge with Time Warner. Big Internet wants to get bigger, and they want to start charging companies protection money to make sure their content reaches audiences without interruptions.

Last January, an appeals court struck down key parts of the FCC’s regulations that protected Net Neutrality, and it seems like the FCC is tilting toward new rules that would allow ISPs to start charging companies for special access to consumers. ISPs would get paid by people like you and me for access to the Internet, and they’d get paid by the likes of Netflix and Skype for better access to you and me. Cha-ching! Good-bye lolcats, it’s double payday!

But it’s not a done deal. The FCC is currently soliciting public comments about these proposed changes, and the public is overwhelming in favor of Net Neutrality. Comedian John Oliver’s fans accidentally crashed the FCC’s website when he aired a call to action. The FCC’s website couldn’t handle the web traffic — the irony!

It was still dark out on Tuesday, October 21, when eight Houstonians piled into a bus paid for by the media watchdog group Free Press (no relation) to ride up to College Station. Commissioner Ajit Pai was making a rare appearance outside of DC to meet with the public at A&M’s George Bush School of Government. There was a decent-sized crowd for a hastily announced meeting on a weekday morning. 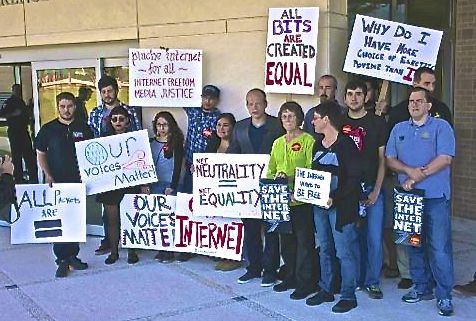 Commissioner Pai opened by saying he was just there to listen, and the two-hour session was taken up mostly by a panel of “experts” — Donna L. Nelson (Chairman of the Texas Public Utilities Commission), a couple of lobbyists, and three people from small companies offering services such as data storage and internet access in rural areas. They were NOT representative of the public. Of the seven people on stage, only two favored Title II “common carrier” regulations. You can see who was on the panel and read their opening remarks here.

One telling moment was when Edward Henigin of Austin’s Data Foundry held up what looked like a small phone book and said that it was a directory of ISPs from 1997. There were enough to fill a small phone book!

“Today,” said Henigin, “most homes have one, at most two choices for Internet — and if they have a choice, it’s between Tweedledee and Tweedledum!”

How could less options, less competition be good for consumers? 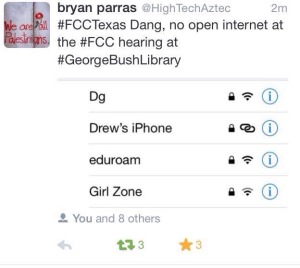 A major, public university without free guest wifi? Welcome to the George Bush School of Government at Texas A&M, where pay to play is the governing philosophy.

Wait, what? Consumers? That might have been the single most-used word through the whole session. “Consumers.” To the FCC and their panel, we’re all just a mindless mob of passive zombies, not “producers” of blogs and videos and , not “citizens” in a democracy. Just “consumers” demanding more bandwidth for our Netflix and our Hulu.

It is true that people are streaming more video and using apps like Skype that require more and more bandwidth. It is true that we need to upgrade our infrastructure to deliver better service in cities and extend broadband to rural areas. Investment is necessary — someone needs to cough up some dough, and big companies want to create toll roads for some to recoup those potential investments, but at no point did any of the panelists suggest that this could be a public effort — that the federal and/or municipal governments could use this as an opportunity to create shovel-ready jobs. Not once!

Another highlight was when Donna L. Nelson (Chairman of the Texas Public Utilities Commission) got booed by the audience during the Q&A. An audience member asked why we couldn’t just provide free public wifi like France.

“I am from Texas,” Nelson said, “and we don’t take cues from Europe.”

Wow, Chairman Nelson, is it really inconceivable to you that someone in Europe might have a solution to a problem that might be better than what you’re doing? You are a dumb nincompoop not worthy of your office if you refuse even to consider an idea because of where it originated. In fact, stop using English right now, dummy.

Dr. Tish Stringer, an anthropologist focused on media studies, filmmaker, and film instructor at Rice University entered this comment into the public record:

I’m put off by the discussion here focused on Consumer vs. Citizen. Company interest vs. Creativity and innovation

I am a producer. Net neutrality means I don’t need a license to produce and distribute content as with tv and radio stations.

I teach filmmaking and my students use the internet today to distribute films, build work sample portfolios, raise money, promote their screenings, submit to festivals, access and use archives for free use art. If the new rules favor large corporations the little creative producers will struggle to make their voices heard.

The airwaves writ large supposedly belong to the people as a public good, but we see them dominated by a few large corporations. The same will be true of an Internet regulated like other telecoms.

Immediacy of a free Internet for populist publishing has been an incredible benefit for information sharing for example in cases of disasters or social movements organizing.

I support net neutrality because I support a plurality of voices and free access to information as a cornerstone to a healthy democracy. As panelist McCullough stated, open Internet and access to everyone is the goal.

Call and write your congressional representatives to show that you are not just a passive consumer. Support Title II reclassification of ISPs as common carriers. Do it for the locates. Submit comments to the FCC here. 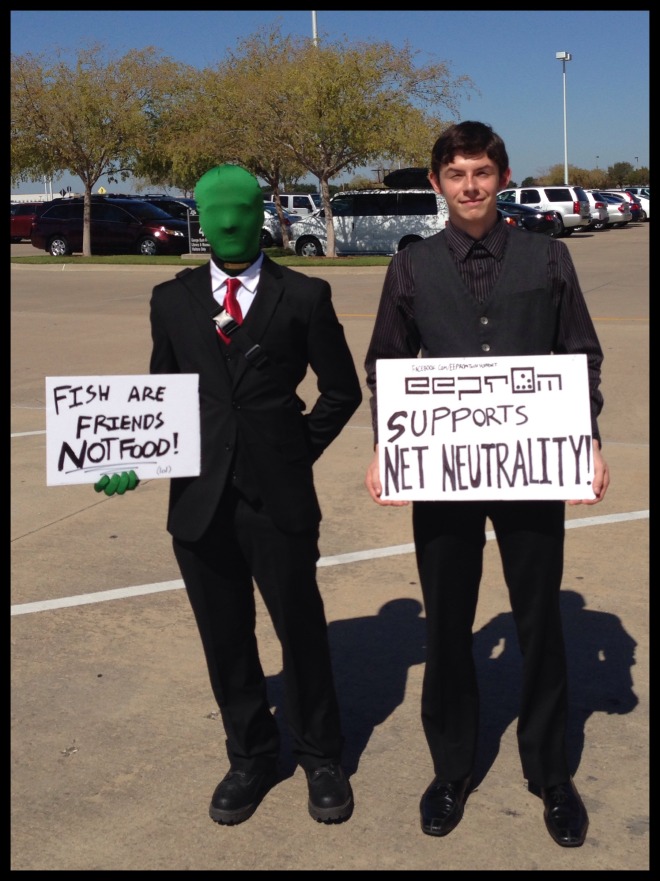 The House of Hudson: A Conversation with Trevell Hudson