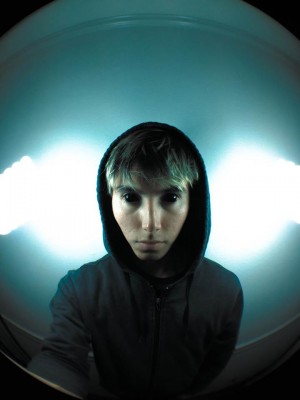 During their time together, Female Demand rode high on a wave of growing appreciation for power-duo bands like Lightning Bolt (who have seemingly reached the apex of their mainstream popularity with their inclusion on the star-studded Flaming Lips’ album Heady Fwends). Bradley Muñoz and Jonathan Perez took the drum and bass thrasher concept to its limits, beyond its minimalist noise roots, to an acid-drenched, space-rock climax, on their only full-length album, “Outside the Universe.” They turned heads with their intensity, in life, but broke up rather quietly, with Bradley’s Facebook status about selling his bass as the only public indication.

Given the spastic movements of Bradley’s body, and John’s machine gun nest of percussive contributions, there are few bands in Houston, which matched the pure violence of Female Demand, when playing live. So it should not be all that surprising that Bradley’s departure only led to something more chaotic, more frenzied and more unrestrained. He calls it P.L.X.T.X., but pronounces it Pluto, (like the planet).

The music itself contains the energy of punk, but without the usual instruments or trappings. Muñoz’s vocals are shouted over a variety of ear-wrenching, electro-gunfire-volleys, that make his admirers want to headbang, but cause some, inevitably, to run and hide. In a fusion of the guerilla-gig, floor-circle tradition of Female Demand, and the simple boombox-cabinet stage of B L A C K I E, Muñoz’ setup includes the stark setup of speakers, a mic and himself, on the floor. The result has all the intensity of a dozen Suicide performances, an air-raid and an inescapable, never-ending fire drill all rolled into one. While fascinating to watch, it’s a bit like enduring a heart attack.

The rebirth of Muñoz as a new artist, one distinct from his bass-hero persona, was immediately visible, in an uncanny way. He bleached his hair a blinding white (like the blanching of the reborn Gandalf) and, when on stage, inserted a pair of macabre black contacts which made him look like either like a soulless wraith or some unfriendly alien species. If you haven’t gotten to witness the contacts though, don’t count on seeing them for a while. Apparently they don’t feel as awesome as they look. Muñoz said he stopped using those in April. “These contacts are very uncomfortable and irritating, plus the process of inserting them into your eyes is a challenge,” Munõz complained, “I may bring them back later, but for right now I’m leaving them at home.”

Unfortunately, according to Bradley, the now one man band has bled popularity, when compared to audiences of Female Demand. “It’s not rock and roll. It’s not a ‘band’ performing. It’s one guy and a couple of gadgets working together,” said Muñoz, “But I haven’t tapped into that market, or group of people, who enjoy aggressive electronic music. I’m [P.L.X.T.X.] only a year old.”

But the lack of commercial appeal doesn’t seem to worry Muñoz at this point, given that the project’s debut album “Selective Mutism” includes a blank CD-R, with instructions urging listeners to make free copies. It’s an extreme measure for someone who fronted a band that enjoyed massive local popularity and was possibly on track to join the ranks of Lightning Bolt or Japandroids, with time. “This path I’m taking is expensive. My paycheck goes to this and I don’t see a dime in return — but for the love of creating and challenging listeners, it’s worth it,” Muñoz said.

P.L.X.T.X. is a timely rebuttal to the overly-populist uses of electronic sounds, by so many new and mainstream artists. Carefully marketed dub$tep and electro-pop acts have hi-jacked the instrumentation of innovative artists like Aphex Twin and Squarepusher and made them tame: Almost too approachable. With the waning but for now still-formidable influence of the Night Culture crowd, there is a huge gap in the market of glitchy, experimental, electronic music, and Muñoz is a good contender. As technology continues to push all live performances toward the less-live (more electronic) side of the spectrum, there’s a desperate need for live electronic acts that bend and break rules, rather than just twist and turn knobs.

This summer has afforded P.L.X.T.X. a unique opportunity to make a footprint outside of Houston, in a place few local bands ever get to tour. Muñoz will take his one-man show on the road, to Japan, touring alongside Houston math-rock wizards, Giant Battle Monster. For Bradley, and Giant Battle Monster as well, the tour seems more than appropriate. Given the distance (and the expense) the average person might ask, “Why the hell Japan?!” but, musically, when you think about it, it makes perfect sense. From Merzbow to Melt Banana, the Japanese have a taste for the musical extreme that, is unmatched in the U.S., on a large scale. The tour so far includes multiple dates in Osaka and Tokyo.

In the music industry, there’s a phenomenon known as “big in a Japan.” It describes a western band or musician whose music does poorly or marginally in their home country, but somehow, for some reason, resonates particularly well in Japan. And apparently, there are more examples of this than you might think, including one-hit wonder Mr. Big: writers of acoustic rock cheese-fest “Be with You.” Of course, historically, these acts have been on the campier side, but maybe with enough elbow grease and gumption, P.L.X.T.X. can achieve this distinction while abroad.

Fans of noise, glitch and just generally extreme live performances, can see these two bands off at their June 29th tour kickoff at Notsuoh.

Who is Jared Leto?