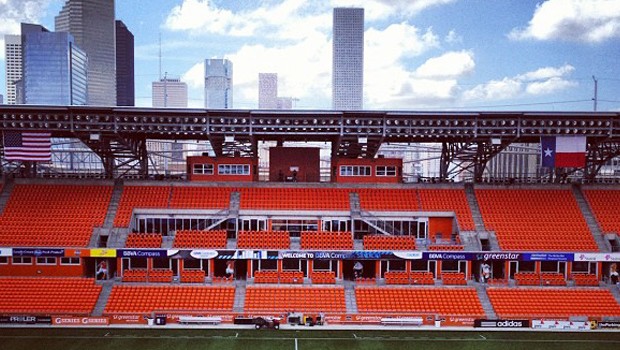 The US Men’s Soccer team came to H-Town Tuesday to kick off their centennial celebrations at BBVA Compass Stadium (home of the Dynamo and newest soccer specific stadium in the US). They played an international friendly against our northern neighbors, Canada, to get a warm up for those not currently playing overseas before they head to Honduras next week to undertake World Cup Qualifying. Unfortunately for the 11,737 people in attendance, it was an atrocious game with very little action in and around the goals, as the game played out to a 0-0 draw. So I suppose the other half of the stadium they were supposed to sell tickets to didn’t miss a whole lot.

Despite missing the top American players, many of whom play in the more competitive European leagues, there should have been a substantial draw for Houston soccer fans as 3 Dynamo players, Goalkeeper Tally Hall, Midfielder Brad Davis, and Striker Will Bruin, looked likely to feature in the line-up.

Apparently, that was not a sufficient level of interest for many locals, as the game was also an exhibition match against an opponent (Canada) who had already been eliminated from the 2014 World Cup in Brazil. Even still, The attendance of 11,737 was approximately 6,500 people less than the lowest attended Dynamo game this previous season and around 8,000 less than the average attendance for the entire season. You could get a great ticket for around $25, so ticket prices couldn’t be to blame. One would think they might be able to match the number of tickets sold for a game featuring a USA Team that resembled an MLS All Star team.

Its not like the US Soccer team plays in Houston regularly. And why should they? Last time they came for the CONCACAF Gold Cup Semifinal at Reliant Stadium for a sumptuous double header with the US playing first and Mexico playing second. The US team featured all of the big boys too, Clint Dempsey, Tim Howard, etc. The turnout for the first US game was pathetic. Reliant looked maybe a quarter full during the first half. But when Mexico came on the field for the second game the stadium was electric, almost surreal, and packed to the brim. So, Houston is 0-2 for coming out to support the national team as far as I’m concerned. We need to step our game up.

Those who did attend Tuesday’s match-up versus Canada were treated to sleep inducing 0-0 draw and a post game shower, courtesy of Mother Nature. All kidding aside, the fans did get to enjoy seeing some of our local guys playing for the Stars and Stripes. Dynamo Captain Brad Davis, age 31, started and played around 65 minutes, and Dynamo Striker Will Bruin, age 23, earned his first cap(appearance) for the US after coming on as a substitute with about 15 minutes left. Surprising to many, including the press, Dynamo Goalkeeper Tally Hall was left out of the line-up with the other two Goalkeepers, Sean Johnson, and Bill Hamid, taking the spots above him. But, no doubt, US Coach Jürgen Klinsmann felt the other two keepers earned their spot ahead of Tally Hall.

All in all the game was pretty pedestrian. Most of it being played at midfield. Canada veteran and former Dynamo star Dwayne De Rosario tested American Sean Johnson early with a vicious shot, but the shot was directly at the US keeper who parried it off to safety. After that the US had the majority of the shots but all were lacking quality as the US chances weren’t struck with enough venom, went wide, or lacked the proper delivery. US starting striker Eddie Johnson took probably one of the worst shots when the delivery looked spot on. The shot was at the center edge of the box and he ballooned a pop fly that landed 10 rows behind goal. The last 10 minutes the game went back and forth a bit with Canada taking the better chances. The US pushed hard at the end, but to no avail. How sweet it would have been had Bruin scored the winner as a sub.

Two things worth noting that absolutely dulled the game were the Honduran Refs who called every ticky tack foul possible, and the fact Canada was thrashed 4-0 by Denmark a week ago. Canada set in defensively and rarely stretched the field. The US has to hope the refs aren’t all as bad as the ones Tuesday night when they travel to Honduras for the Feb. 6 World Cup Qualifier.

The crowd erupted wildly every time Davis or Bruin were played the ball, and was pretty raucous despite the vast areas of empty seats and sloppy performance. So I definitely have to give props to the Dynamo fans who attended. After the game, Brad Davis and Will Bruin both reaffirmed the media that it was certainly a special night for them despite achieving the desired result.

Chants of U-S-A! bellowed throughout the stadium much of the night, and the crowd were all decked out in USA gear. Often reminding you that this patriotism was not a kind about politics. It was a celebration of the people like you and I that are the heart in soul of this country. That we can all come together over at least ONE thing only in the way that sports allow. The ups and downs that serve as a microcosm of our lives ending in a finale that we can estimate but never predict for certain, all shared collectively by the whole nation.

Next time the US Men’s Soccer team comes to town, I urge you to come out. This time the game sucked, sure, but the experience was one for the memory bank. Not only would you participate in probably one of the few moments of Patriotism that is actually kinda cool, but you would be joining a revolution of sports in our country. As it is only a matter of time that our dominant athletes begin to take their talents to the soccer pitch. It’s kinda “Underground”, y’all. And soccer usually is as they call it elsewhere, The Beautiful Game.

The Dynamo begin the 2013 MLS Season March 2 vs. DC United, and play Mexican side Santos Laguna March 5 in a CONCACAF Champions league 2 legged knockout round.