A Weekend With Picasso 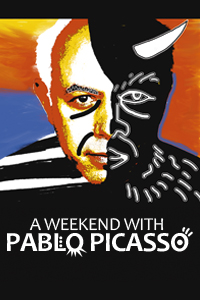 Leon casino, As we all know, whether you’re an art fanatic or could care less, Pablo Ruiz y Picasso was arguably the most influential artist of the 20th century. He was a painter, sculptor, ceramist, set designer, and print maker. Historians estimate that Picasso generated anywhere from 20,000 to 50,000 works during his 75 years of art making. He also pioneered the Cubist movement and advanced the plastic arts. As one might expect, a person like Picasso must have had a unique philosophy to match his iconic work. After a lifetime admiring Pablo Picasso and countless hours researching the Spanish artist, Herbert Siguenza-actor, playwright, artist, and cofounder of the hit latino comedy troupe Culture Clash-brings the singular personality of Pablo Picasso to the stage in his one man act, A Weekend With Pablo Picasso.

From February 2 to the 27, The Alley Theatre will play host to A Weekend With Pablo Picasso. In A Weekend With Pablo Picasso, Picasso’s art dealer asks him to make six paintings and three vases over the course of a week. Picasso unwillingly complies to the overwhelming request. It just so happens that very week Picasso has agreed to allow a small group of students (the audience) to stay with him in his home. As Picasso hastily paints and moves about his courters, he lectures his pupils on how painting is the only avenue to discovering truth, why an individual would want to subject themselves to the tortures of art making, and the personal sacrifices that he has made to become a momentous artist.

As Herbert Siguenza plays the part of a self aware and brilliant Picosso, he is simultaneously painting and drawing Picosso lookalikes. Siguenza’s impressive multitasking has been regarded as remarkable, a thrilling joy to watch. For Siguenza doesn’t make a shallow attempt to mimic Pablo Picosso. According to critics and audiences alike, one can see that Siguenza has himself been a student of Picasso’s works for decades.