Blogging While Intoxicated: Glenn Beck moves to Texas or another reason to stay the hell out of Dallas

Leon casino, Down in the content mines where I slave away for 10 for a $1 Ramen, left over cigarettes and warm beer (yes that is how we get paid) there are some stories that you hope are true. And there are some stories that you pray are rumors, and when it was announced that Glenn Beck was considering moving to Dallas I was praying that it was a rumor. I really didn’t want another paranoid right-winger to call Texas home. It’s bad enough that creationists are in charge of our science education, the legislature wants to turn every cop in the state into an immigration official and state government thinks it’s a better idea to spend $250 million on a race track than it is on public schools, but to have mother fucking Glenn Beck calling Texas home, well that’s just too fucking much.

For those of you who found this article through a Google news alert and want a fight with another liberal publication, or for the eight people who read this site (5 of whom don’t know who Glenn Beck is), I’ll say this: since Beck started his program on Fox News in 2009 Media Matters for America has generated 258 pages worth of outlandish bullshit he has said. From suggesting that the Obama administration is trying to provoke conservatives to violence to stating that the Obama administration might kill him to suggesting that the Obama Administration might kill 10 percent of the population; Beck has been a bright shining light of Alex Jones/Wing Nut Daily crazy in the usually sane seas of basic cable programming.

And now this ass-hat of a self proclaimed rodeo clown is bringing his tear stained chalkboard to Texas on a full time basis. Just when I think that Texas is getting better, that it’s becoming less backward, that a state that legally allows women to walk around topless is finally coming out of the dark ages and into the age of enlightenment, I get this. We all know that Beck has a history with Texas, both recent and ancient, but him residing in the state well that’s different because he could conceivably throw off the delicate came of musical chairs Texas Republicans play with high offices by deciding to run for Governor. And the last thing in the world I want, and Texas needs, is Glenn Beck as Governor.

The only thing left to say is: 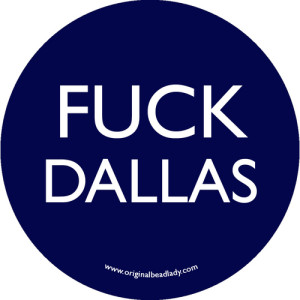 I’ll see you at the bar.