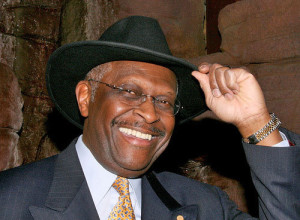 Could this man be America's greatest performance artist?

Leon casino, How often do you find yourself wondering exactly how early is too early to start drinking? If you’re like me, 10 a.m. this past Sunday was about the time you wanted to Irish up your coffee. For those of you who don’t aspire to be paid obscene amounts of money to pontificate meaninglessly in an increasingly irrelevant industry-or have a life-Herman Cain, Mr. Black Walnut himself, was on Meet the Press this past weekend. Anyone wondering why a man who admits that he isn’t familiar with the neoconservative movement was invited on a very serious talk show only has to look at this poll.

Okay fine, I’ll recap it for you: Herman Cain and Mitt Romney—you know, the guy who has been running for President since 2007-are effectively tied at about 25 percent of the vote. This makes the Hermanator a GOP front runner. Even though Herman Cain may not be completely unfamiliar to members of the Free Press underground, since he is now a ‘front runner’ his statements have taken on extra weight. And that extra weight is what makes me wish I could buy liquor on Sundays. It’s not just his blind fucking ignorance that gets me stabby, it’s the fact that he went on national fucking television and said that liberals want to economically destroy the U.S. I wish that was the only asinine thing that Cain has said, been linked to or accused of.

A quick side note before I continue, perceptive readers might notice that I’m adding a few more links than usual. This isn’t just because I’m getting paid by the hour, I’m linking to all these sites so you know that I am in no way making any of the crazy up.And once you read that Herman Cain may have stolen his 9-9-9 tax plan from the 2003 version of Sim City you might think that this is all horseshit and hyperbole. God, I wish it was. You have no idea how much I want to say that Herman Cain accusing  liberals of killing Jesus, in print, in December 2010 was made up. You have no idea how happy it would make me if Cain quoting the theme song from Pokemon 2000 had happened on an SNL skit instead of at a Republican primary debate, and on his official website. It would literally be a dream come true to find out that Cain’s border security plan is an elaborate fiction.

Before I even try to describe Cain’s plan to secure our borders I need a drink. Jesus Christ, do I need a drink to get through this. I only have half of a flat beer. Shit, it’ll have to do. Ok, here goes. And remember I’m honestly not making any of this up. In July, back when Cain was just another Republican trying to steal some of Michele Bachman’s thunder, he said he wanted to build a moat along on the U.S.-Mexican border, and then he’ll fill it with alligators. And then, to make sure that none of those sneaky immigrants can get into his fort, he wants to put up a 20-foot-tall electrified fence, and he’ll call it the Great Wall.

Cain later tried to pass off his, let’s call it, “imaginative” alligator filled moat/Great Wall of Arizona border security plan as “a joke.”  It didn’t go over very well. In fact his “alligator filled moat/electric fence” joke bombed so bad that it caused Lauro Garza, a life-long Hispanic member of the Republican party and the Texas director of the largest Latino Republican organization in the country, to quit the GOP.

Cain’s attempt to pass off his “unique” border security plan as a joke, and his repeated statements about it, prompted ABC News Senior Washington Editor Rick Klein to wonder “if it’s a joke, is [the] funny part when he says it again and again?” Even after Cain tried to walk back his “different” plan for securing our borders he went on to say that he was serious about using, once again not making this up, military troops with “real guns and real bullets” to secure the border.

As I’ve tumbled farther and farther down the Herman Cain rabbit hole, and have gotten further and further into the bottle of mouth wash I found in the medicine cabinet, I’m beginning to think that Cain might be the greatest performance artist of the last 20 years. And I’m not the only one.

This is probably the Advanced Citrus Listerine talking, but what if Cain’s entire campaign is an elaborate Andy Warhol-esque prank? It has to be. His policy ideas are so insane that he can’t be serious. This has to be some kind of Dada-ist commentary on the state of the American electoral system. It’s the only way it makes sense. I mean no one in their right mind would seriously propose a border security plan that sounds like it was created by an 8-year-old, right? Alligator filled moats, electric fences with a warning sign that says “this will hurt you”-that’s the type of thing a child would come up with.

It’s not just Cain’s policy ideas that only make sense when seen through the filter of a performance art piece. His oft repeated comment about not having the facts to back up an assertion that, the now global, Occupy movement has been “planned and orchestrated to distract from the failed policies of the Obama administration.” That has to be a satirical attack on the 24 hour news channel’s lack of fact based reporting, right? Or Cain calling Romney a “Wall Street” candidate while he has deep ties to the Koch brothers. That’s got to be some kind of commentary on the cozy relationship between big business and politics. As Scott Ross of One Wisconsin Now told the AP “”Herman Cain is the first presidential corporate spokes-candidate.”

I’ve got it. The final proof that Cain is playing an elaborate joke on all of us. This video of Cain, a devout Baptist, singing a reworked version of John Lennon’s Imagine that’s all about pizza. I can not stress this enough: I’m not making this up.  Now there’s no way that a competent campaign manager would have let that video surface. While it is 20-years-old, it is still a video of a Republican presidential candidate dressed in a choir robe singing about fast food to the tune of, what is arguably, the most un-Republican song on the planet. And yet, it’s strangely familiar.

Even the story about Cain using over $100,000 donated to his campaign to buy his own book from his own company has to be some kind of Avant Garde joke about campaign finance regulations. How else can you explain him telling supporters to buy his book because “they’re selling like hotcakes?”