A pair of classic films make a return on Blu-ray, and it’s a welcome reunion.

The Boys From Brazil (Shout! Factory, 1/6) pits Nazi hunter Laurence Olivier against Dr. Josef Mengele (Gregory Peck). The bad doctor has initiated a worldwide assassination plot against dozens of seemingly unrelated people. A subsequent twist has Mengele coming out of hiding to lead a new Third Reich. In the meantime Mengle was living a secret life and delivering babies (to the aforementioned people) that are clones of Hitler. As fantastical as this sounds the movie, from a novel by Ira Levin (Rosemary’s Baby), and directed by Franklin Schaffner (Planet of the Apes, Patton), flows with a sense of international intrigue with moments of violent suspense. 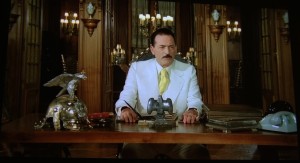 No spoilers but if you’ve seen the movie you know that Dobermans play a unique role but not in the sense of their tarnished WWII image as Nazi guard canines. Peck chomps at the scenery in a truly bad guy performance. Olivier has a scene with Uda Hagen, a unique actress rarely seen in movies whose credits also include penning the technique book “Respect For Acting,” still used in drama schools to this day. It’s chilling to see these two great thesps going at one another, Oliver as the interrogator, Hagen as the prisoner.

Tootsie (Criterion Collection, 12/16/14) was a kind of pivotal movie in the sense that it took an old standard trope like a man in drag (Dustin Hoffman as Michael Dorsey a.k.a. Dorothy Michaels) and gave it a fresh spin for a new decade (Not unlike how Mrs. Doubtfire was a film for the ‘90s.). Tootsie also won a Best Supporting Actress for Jessica Lange and gave Bill Murray a quirky supporting role not unlike the work he does for Wes Anderson nowadays, a full two-years before Murray hit it big as a Ghostbuster.

Houston residents will remember that then Mayor Kathryn Whitmire (1982 – 1991) bore a slight resemblance to Hoffman’s Dorothy. Tootsie was nominated across the boards and was the second highest grossing film of 1982. The comedic writing is sharp and many writers worked on the project both credited (Larry Gelbart) and uncredited (Elaine May). The big reveal is a feast of moviemaking with reactions shots edited at lightning speeds while still maintaining the laugh quotient.

Extras include a recent interview with Hoffman, commentary by director Sydney Pollack, up to then a director known for dramas and action films like Three Days of the Condor. Also two making-of-docs (one an hour long) tell you everything you always wanted to know about the production of Tootsie.