FUCK FACTS, SHOW ME THE ART by Bryan Parras

The debate is over. There is undeniable consensus that the world is getting hotter.  Summer 2014 was just designated as the hottest summer ever, and 2014 is poised to be the hottest year ever recorded according to the National Oceanic and Atmospheric Administration.

The world news now has a daily segment for extreme weather, with images of flash floods, raging forest fires, heatwaves, droughts, and blizzards (not to mention weird pests and diseases).  Yet the U.S. continues to favor fossil fuels with subsidies and tax breaks, while people across the globe begin adaptation measures for what’s only going to get worse. 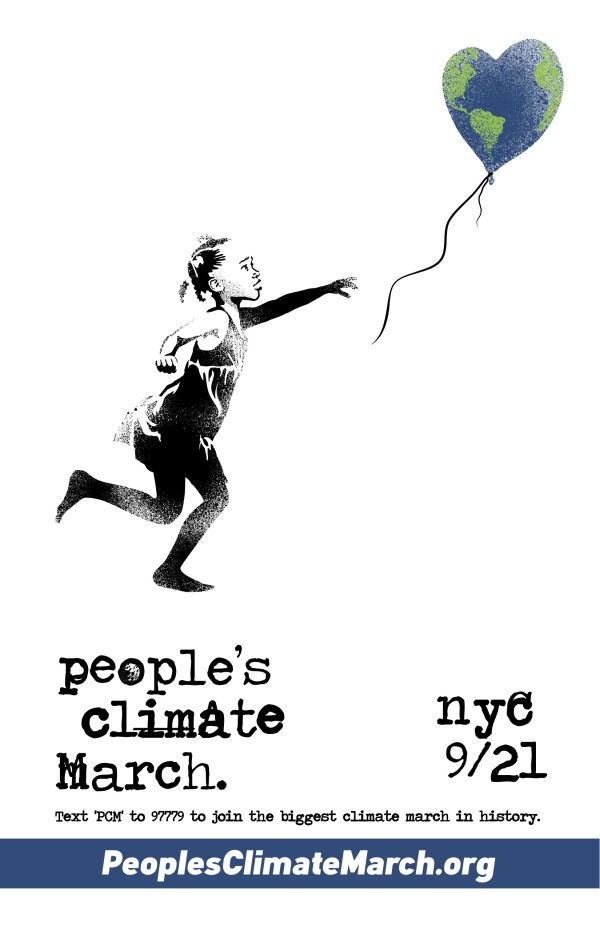 The People’s Climate March (PCM) has passed, and while 400,000 people taking over Lower Manhattan for an afternoon was impressive, for most of those who participated, the work is just beginning. The march served as an exclamation point to the urgent call to action on greenhouse gas emissions.

Still, the American public is unimpressed. Whether your head is in the sand or you’re sufficiently sedated with capitalist goodies, the evidence abounds. So what will it take for the American public to wake up?  What will be the catalyst to motivate the masses? Perhaps facts don’t matter. If flash floods, drought and severe weather can’t do the trick, can art lend a hand? Maybe we need poets, painters, and artists to tap into our emotional experience.

Enter native Houston artist César Maxit and dozens of other artists, activist and volunteers who convened in Bushwick, Brooklyn at the MayDay Convergence studio and Be Electric warehouse in preparation for the People’s Climate March. 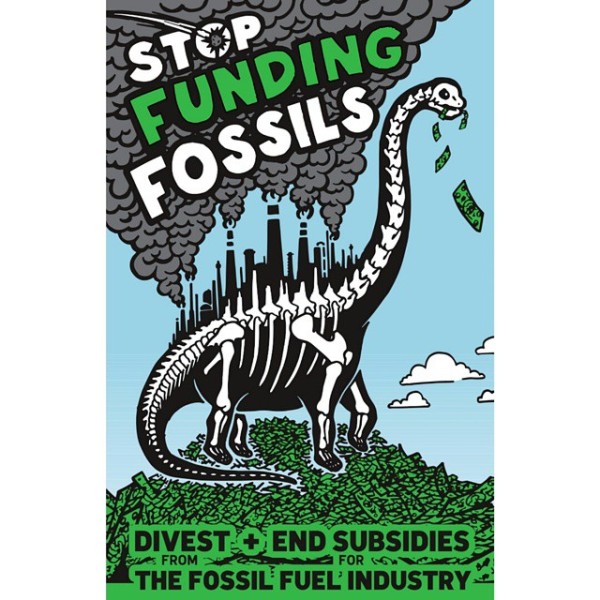 Maxit’s family fled Argentina when he was six, as the Dirty War targeted left-wing political opponents and led to thousands of civilian deaths and disappearances.  This is exactly the type of experience that can shape an individual’s politics, but Maxit had a fairly normal upbringing on Houston’s west side. He grew up on Dairy Ashford and later attended college at Texas A&M, where he studied architecture, but he soon grew bored and unfulfilled with his professional career.

“It wasn’t all it was cracked up to be, working the professional corporate world as an architect, so I found that just to feel like I was contributing to society and my community, I really had to engage beyond my professional world and engage with community groups on different issues,” Maxit said. “That’s where my art flourished and developed, in service to different groups working for positive social change.”

Since then, Maxit has worked with groups like School of the Americas Watch, Présente, and immigrant rights groups. For the People’s Climate March, he was commissioned by Oil Change International to design and print 150 flags representing the need to end government and private funding for further fossil fuel extraction.

“It’s beautiful,” said David Turnbull, Campaigns Director for Oil Change International. “César Maxit helped design this really beautiful banner with a dinosaur that has smokestacks coming out of its back. It’s gorgeous and it really tells the story of how we are funding these fossil fuels that we really need to be keeping underground.” 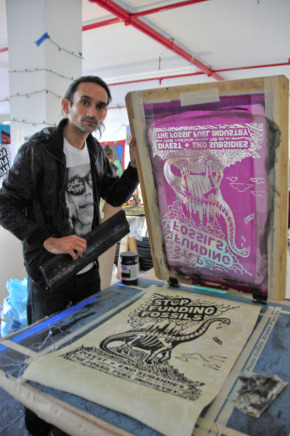 Across the street at Be Electric, CultureStrike, Galería de la Raza and others were working on larger pieces of art.  Floats and parachutes fill the space.  Saws and hammering can be heard as artists and volunteers scurry to finish the pieces.

“Artist are often somebody you call at the last minute to make a boring march or rally seem a little bit more interesting,” says the bestselling author, artist, and activist Gan Golan. “But luckily, we’ve been able to do things differently this time, and artists have really been part of the DNA of the strategy of creating this whole movement.” 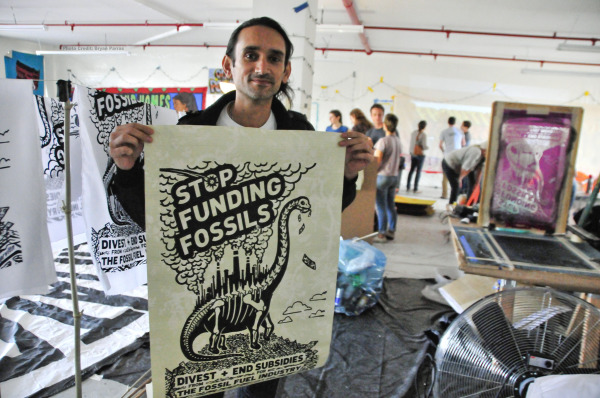 I wasn’t the only one impressed with the ability of art to tackle intersections in climate discussions that are often difficult to articulate.  Liana Lopez and Yudith Nieto share their takeaways from last week’s convergence in the following reflections.

Artist Favianna Rodriguez created striking “Hands Off Our Pussies. Hands Off Mother Earth” signs and uncomfortably detailed but colorfully painted three-foot vagina posters to help folks make what should be an obvious connection. 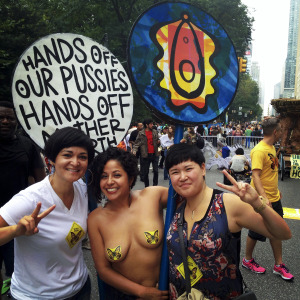 “We are life givers, just like the earth is a life giver. Women are still heavily exploited at a global level through sex, all to make profits. It’s the same kind of thinking that goes into ‘let’s exploit everything we to can to make profits from the land.’” Favianna said. “There’s an arrogant attitude that exists in the world that says that we can just rape mother earth. We extract, poison the water, the air becomes unbreathable and it’s really a form of rape.”

The intersectionality between the feminist and climate change movements seems painfully obvious, but I hadn’t put made that connection until the moment Favianna explained it in those particular terms.

“I wanted to draw that analogy and really remind folks…people in power are men. They dominate every single field and have created wars and destroyed the planet. When will we have a vision with female leadership? With leadership of those that are giving life? We have the solutions and it’s really about tapping into that knowledge,” Favianna said.

Her artwork centers on social justice themes and has been exhibited internationally. Favianna is also the director of CultureStrike, a dual-coast grassroots collective of artists and writers, and a coordinating partner of the march. She has created powerful imagery for the People’s Climate March, including the “Defend our Mother” poster with an image of the earth behind a mother holding her child. 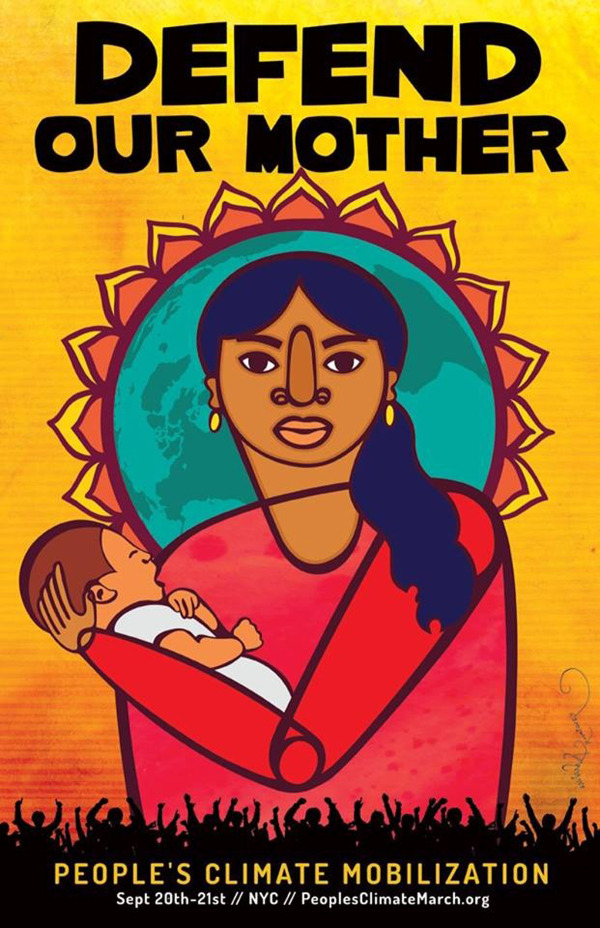 Native American filmmaker Elle-Máijá Tailfeathers is another artist that highlights the analogy of Mother Earth being raped for resources through the provocative film short Bloodland. She previewed the unsettling piece in the Frack Off Indigenous Women Leading Media Campaigns to Defend our Climate panel in the lead up to the march.

“The film is simply a reflection of my feelings toward the incredibly harmful process of fracking happening on my home territory,” Elle-Máijá said.

Even more impressive is the fact that Elle-Máijá produced the film using restitution check funds stemming from the Blood Tribe Chief and Council’s selling of tribal lands for fracking purposes. She had no control of the final sell of the land by her council chief, but she had control over what she could do with the money. After physical protests at the site failed, she created Bloodland. She hired a completely indigenous cast and crew and officially credits the gas and oil companies for funding the work in the closing film credits.

Mother Earth has pussy power.  Of course she does!  For supporters of women’s right and equality, it should be an easy concept to understand.  Feminists and climate change allies go hand-in-hand, naturally.

The power of art is its relationship with a region and its people. It’s a means to communicate with others and serves as a social commentary about what is going on in the world.

That power was witnessed at the People’s Climate March (PCM) this past Sunday. Most of the artists that were involved in producing the powerful art pieces at the PCM either come from or stand in solidarity with those on the frontlines - the communities of color and First Nations who often bear the brunt of climate change impacts while also suffering disproportionately from extreme extraction, polluting industries that threaten their health and displacement from their homelands. 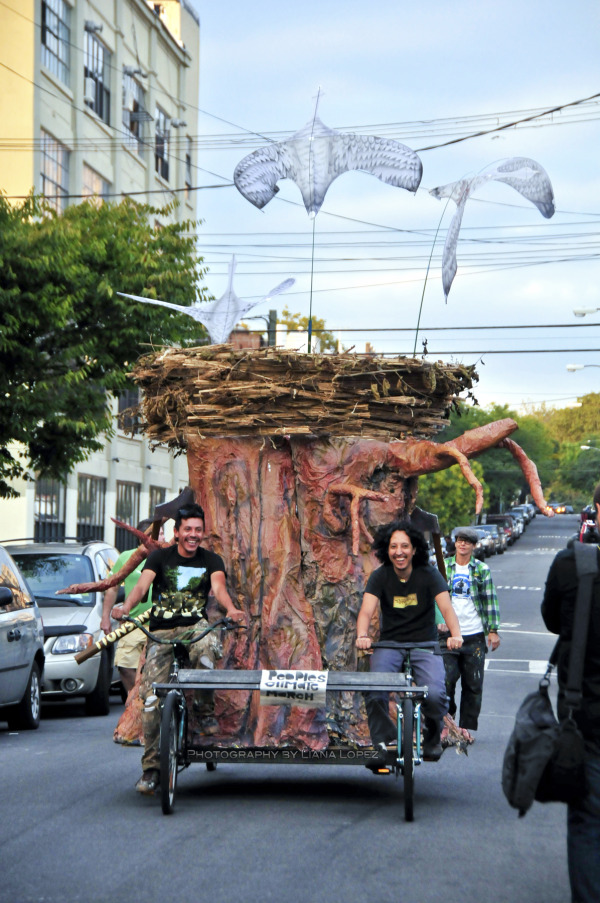 One story I heard is that of Rodolfo Vasquez, a young construction worker from Mexico, D.F., who came to the U.S. in search of a better life packing only his hopes and dreams. Rodolfo is part of an artist collective called “Ropavejeros” (rag-and-bone men) that includes New York muralist Raul Ayala.

The collective works with communities to create art that represents the shared struggle of immigrant and undocumented residents. The Ropavejeros were working on a people-powered float made especially for the PCM entitled “el Nido de la Esperanza” (Nest of Hope).

Rodolfo works full-time and volunteers for the collective on his days off.  Many of the members have taken days off from work, unpaid, to help finish the pieces. He expressed frustration towards the “fresas,” privileged youngsters of the movement, who can do this sort of thing all day because they fund themselves or have become career activists. Unlike him, he struggles to support himself financially. Rodolfo feels that it’s important to tell the immigrant story, so he volunteers his time and expertise.

I thought of Ayala’s tree when I heard Gloria Hilda Ushigua Santi’s story. She traveled thousands of miles to join the march and participated in the Climate Justice Summit, organized by the Climate Justice Alliance, Indigenous Environmental Network and other allies.

Hear her story (starting at the 30:00 minute mark) 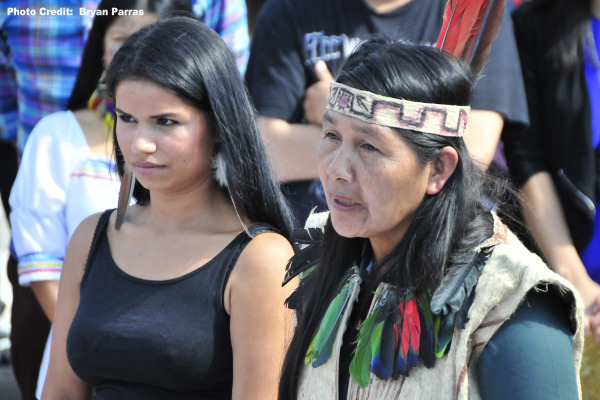 Gloria is a member of the Sápara nation deep in the Amazonian rainforest of Ecuador.  Her tribe has been reduced to less than 500 people and is currently recognized as endangered on UNESCO’s Intangible Cultural Heritage of Humanity List. The critical numbers are due to the migration of settlers and energy speculators into their ancestral lands.

Both stories touching on the threat of the extinction of people who are most impacted by climate change is staggering to me. We hear about animals, plants, and even a gecko, but people? WTF? We have a serious problem if we continue to think that building a Starbucks is far more important than cultivating a rich land-based way of life.

The People’s Climate March was not guided by the big NGO’s that day but by the frontline groups who ultimately made the march their own and brought attention to the culprits obsessed with capitalism and the commodification of our natural resources.

With the efforts to hold them accountable for developing conditions in which we are no longer able to thrive in our environments, we all have a responsibility to the communities sacrificed for our better quality of life. 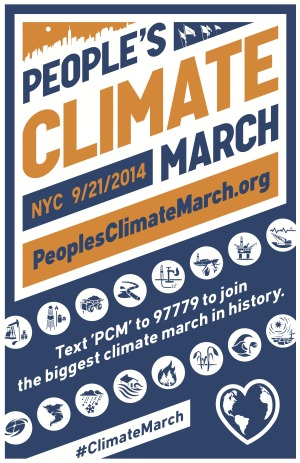 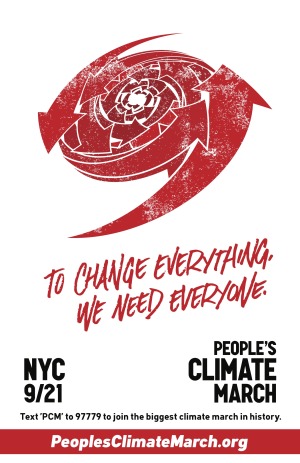