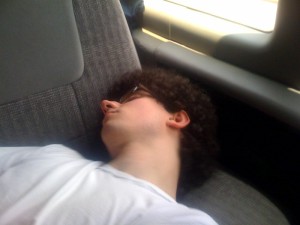 I later put my balls on his forehead. 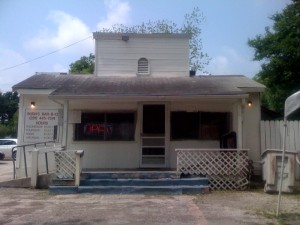 Texas BBQ is a contentious issue. Everybody has their own criteria, their own favorite, and their own subjective (wrong) opinion. I like to consider myself a purist: I enjoy ‘Texas Ass Texas’ style BBQ as opposed to more nuanced niche genres. This means I like a lean and smokey brisket, beef ribs, smoked chicken, and my beans to be understated. There should always be a whole jalapeno in arms distance for showering brisket. Now, an anonymous friend of mine  (Ryan Chavez) , made the request to make a pilgrimage to a favorite joint of his Burn’s BBQ in Acres Homes. Burns has been around for more than 25 years and I must say I was slightly bothered by the fact that I did not know of the place.  Anyways, we hopped in Chavez’ 32 passenger van and made the arduous trek from Montrose to Acres Homes. Our friend Brittany and the bean pole thin Cley Miller of local band Young Mammal’s joined us. What I was to find was a ramshackle shack nestled in between houses and speckled with stray cats. Instantly charmed. Burn’s has been at it for 25 years yet it is a snapshot from segregation era Houston. So naturally, the stylistic tilt at Burn’s is ‘Soul Food’ style BBQ.  The menu is modestly written on posterboard which seems as if it was done on day one of opening 25 some odd years ago. The menu is simple: Beef brisket, pork sausage, and pork ribs. But I don’t eat swine. No chicken, no turkey, not even a baked potato. ( Drinks served from a Pepsi machine) Oh well. So I made my brisket selection and opted to roll with baked beans as the side. After taking a seat on the picnic tables out front, we were quickly delivered our respective orders in what seemed to be paper grocery bags with styrofoam treasure troves inside. Now, this is no Texas style lean smokey brisket. No, this is fatty and well seasoned ‘Hood Brisket’. Republicans hate this brisket.  White men are afraid of this brisket dating their daughter. But oh man, this was delicious brisket.  And Burn’s likes their sauce sweet. No need for dessert because the beans are just as sweet. Loaded with what was ostensibly celery and peppers, the beans are sweet and savory like someone poured 2 cups of honey into a bowl of Gumbo. Sweet beans ain’t my bag but I can definitely see the draw for some folks. Either way, my triglycerides had doubled after the meal so we quickly headed back as I was fearing the need for an angioplasty. This super-fatty sugary meal took a heavy toll on our friend Cley Miller. Just 4 minutes into the ride home, he laid his scrawny ass down along a few van seats and passed out like he had just ate his weight in Oxycontin.  Simply said: Burn’s is way clutch. Not totally my preference, but a formidable opponent to the Thelma’s, Pizzatola’s, and Luling’s of this world. Definitely a NO NO for lightweight’s.