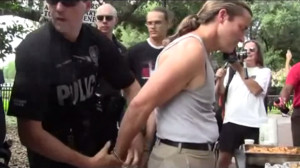 Leon casino, The City of Houston is currently attempting to vote in an amendment to chapter 20 of the code of ordinances that would criminalize people who share food. The amendment requires that anyone who wants to share food in a public space will need to prepare food in an approved kitchen, have one member of their group undergo a food safety course, store their food in an approved location and never in the home, and must serve food in an area with hand washing facilities. The location for sharing food must be approved by the city and the license to share food may be revoked at anytime. Anyone who does not comply can be charged fines of $2000 and will be cross-examined. A full text of the proposed amendment may be found at this address: http://bit.ly/xysSDH

This amendment is a product of government over-regulation and imposes on freedom of citizens. The amendment would require government permission to share food, criminalize citizens who do not have such permission, or had such permission taken away, and create a new complicated set of hearings and appeals for those who lose such permission including “cross-examination,” fines, and criminal charges; these are onerous to the average citizen and counter to a healthy community. It makes sharing of home-cooked food among some Houston residents illegal, which is needlessly invasive and depends on arbitrary government opinions regarding the context of friendships and social gatherings – which are protected under the 1st Amendment. It generally impinges on 1st amendment-protected rights to free assembly, with new requirements for groups to obtain written permission to share space on public property.

Further, the amendment reinforces arbitrary marginalization of the homeless population. The amendment covers “charitable feeding”. The amendment imposes an entirely different set of standards on those sharing food with the homeless than those sharing food at picnics or tailgate parties, thereby violating the “equal protection under the law” clause of the 14th Amendment. Food Not Bombs is an organization that shares home-cooked vegan and vegetarian food four nights a week. The food brought to be shared is the same food that would have been eaten in the home. It is less about doing a good deed and more about helping friends who have less.  Homelessness is not a crime. The homeless population is continually marginalized. The city holds an “out of sight, out of mind” policy. The amendment would allow charitable feeding to occur in only a few set locations. At the city council meeting on March 7, 20121, the overwhelming message of those supporting the amendment was that they wanted the homeless population gone. The repeated message was that facilities already exist for the homeless, so send them there. Who is to say that a person from a homeless population is any less a friend than any other person? I have volunteered with Food Not Bombs since my freshman year in college. The people I share food with have shared my struggles and my successes as I have shared theirs.

The fight isn’t over yet. There will be a city council meeting on Tuesday, March 20th at 2 pm. If you want to help oppose the amendment, please call your city council members and tell them you oppose the amendment to chapter 20 of the code of ordinances in its entirety. Then, call the city secretary at  (832) 393-1100 and sign up to speak at the city council meeting. Come share food at the potentially last legal Food Not Bombs meeting on Monday, March 19th at 8 pm at the Downtown Library. Visit the Facebook page for more information about the issues at hand: https://is.gd/houstonsharing. You can also sign a petition at http://tinyurl.com/freetosharepetition.