You know what my third favorite thing about this country is, particularly in Houston? The fact that I can eat anything I want. We live in the country’s most diverse city. According to the City of Houston website, we have 92 different consular offices in our area, meaning that there are more than 92 different cultures living within the city. Naturally, there is a lot of food to choose from — over 11,000 different places to be precise (once again taken from the city’s website).

Food is more than just sustenance though; food reminds us of home — it fills our hearts as well as our bellies; it nourishes our spirit as it nourishes our body. I know whenever I come back from travelling, the first thing I want is a set of sandwiches my mom makes, and I’m not really home until I have them. I’m no different from the rest of the world; all we ever want is the food we grew up eating.

The beauty of food reminding us of home is that home is infinitely different from person to person, and Houston caters to that. If your comfort food is pizza, then Houston has got your back. You like Mexico City style tamales, Houston’s your spot. Into Ethiopian food? Yup, Houston’s got it. Is your thing New York style Halal fried chicken that leaves you wanting more flavor and higher quality food? Then you’re in luck! Houston has the place just for you — Jones Fried Chicken.

Jones Fried Chicken makes up part of the rather diverse back-of-Sharpstown-Mall scenery. It sits on Fondren, just north of Bellaire, right next to a Whataburger and caddy-corner to a dollar store that is too big to tell if it is open or not. If you know the area, then you will recall that there used to be a James Coney Island in that corner — that JCI is now JFC. 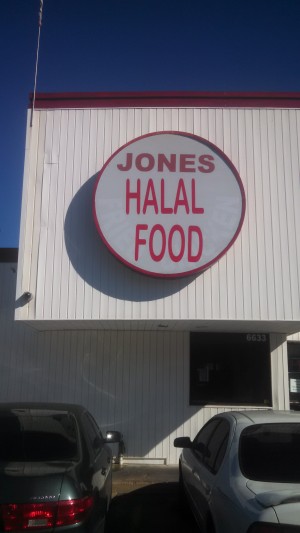 This janky sign must be a sign that they’re putting all their effort into the food, right? Wrong.

Driving down Fondren there is absolutely no way to miss Jones. It has a taller-than-the-rest, bright red and white sign that sits right next to the street, and it is the only Halal fried chicken restaurant in the area. Southwest Houston is no stranger to ‘world’ restaurants — it’s not like River Oaks or West U where you will be hard pressed to find anything from Africa, the Middle East, or south of Mexico. Southwest Houston, on the other hand, is like a box of chocolates: You never know what you’re going to get next. So, standing out in southwest Houston is actually quite an accomplishment.

I live a couple of blocks away from Jones and finally, after the zillionth time of driving by Jones Fried Chicken, I decided to stop and try it.

Pulling in, the first thing I noticed was that the parking lot was full, so I was excited because a lot of people were eating here. (That usually means the place is really good.) As I walked into the restaurant however, I turned and looked, and my assumption that a packed parking lot means a packed restaurant was proven wrong. Still, unphased by the emptiness of the restaurant, I stepped up to the wall-menu and tried to decide what my meal would be. 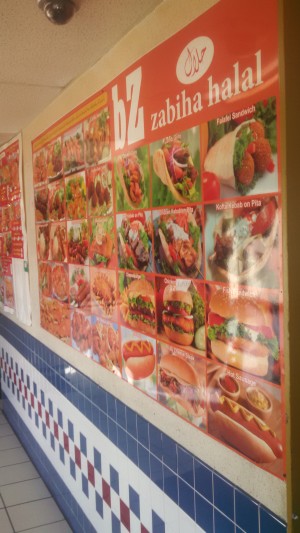 Everything sounded and looked good — they had chicken wings, catfish, kafta, falafel, Philly cheese steak — they have pretty much anything anyone could possibly want to eat. I ended up ordering the lamb sandwich with a side of French fries. (Granted, Jones Fried Chicken has “fried chicken” as its middle name, so I should have ordered la pièce de résistance, but the rotating lamb looked delightful and I couldn’t resist.)

While I was waiting at the counter, watching my food be made, my mouth began to water as they sliced the lamb and packed my sandwich with veggies that look impeccable — tomatoes redder than gala apples, lettuce greener than green crack, and onions so pungent they could be smelt three feet away. It goes without saying, but I was stoked on my lunch.

I decided to be adventurous and took my meal upstairs, right in front of the television playing some obnoxious kids’ show. Anxiously staring at my sandwich, I took a huge bite and to my surprise…nothing. I double checked to see if I actually had food in my mouth and accidentally bit my finger. Confused, I kept chewing. “Ok, let’s try this again,” I thought as I opened my mouth for another bite. I bit down onto the sandwich. This time I made sure to concentrate, but again, nothing.

I might as well have bitten into thin air. With each bite I took, disillusionment and I became better friends. Having finished the sandwich, I dubiously looked at the French fries and began covering them with the hot sauce they provided.  I began to munch away, and that’s when I realized that the best part of my meal was the children’s show on the television. Even the hot sauce they gave me for the fries was tasteless!

It goes without saying that I felt like a little kid who was good all year so Santa Claus would bring him a Game Boy but instead Santa gets him an Etch A Sketch. Thanks for nothing, Halal Fried Santa!

So, if you’re one of those people who think that ISIS is invading the country, or that Obama is implementing Sharia law, or that the gay agenda is bringing Islamic extremists to Houston, believe me when I tell you: There is nothing to worry about. With places like Jones Fried Chicken offering what they do — pass the Chick-Fil-A, bredren, Jesús of Suburbia is not going anywhere.

*Disclaimer: French fries are now allowed and accepted by the good people of ‘merica! once again, now that France is back on the anti-Islam bandwagon after their reaction to Charlie Hebdo’s death. Although, I do wonder if Jones Fried Chicken changed them to Freedom fries before everybody was choking on Charlie’s tip.