False Idols Halloween Show Tonight! We talk to The Pixes, Madonna, The White Stripes, The Mummies and organizer Bob Geldof 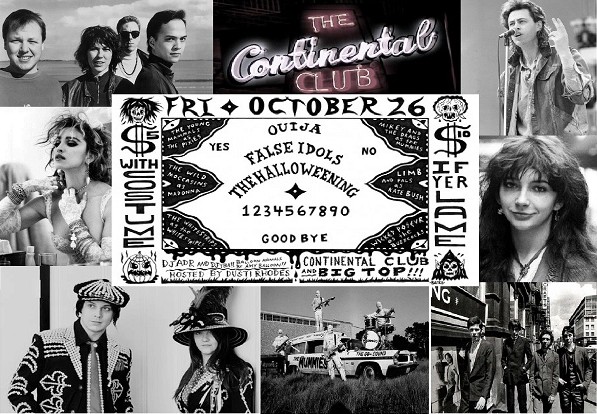 How many of you folks paid top dollar to see Madonna last night?  Well now, don’t you feel a little dumb? Yeah, because tonight at The Continental Club and Big Top you can see Madge and a whole host of other amazing acts like The Pixies,  The White Stripes, Kate Bush, The Mummies, and the Buzzcocks. And all for a mere $5 or $10!!! Fools!   [ed. - Actually, it’s Young Mammals, Wild Moccains, The Whit Strips, LIMB, Mikey and the Drags, and Wicked Poseur playing as those bands but we didn’t have the heart to tell him]  Omar told me he had connections with all these acts and so he put me in touch with organizer Bob Geldof [ed. - Actually, that was just Joe Mathlete’s e-mail] who in turn put me in contact with all the acts, most of whom had time to respond to a variety of questions I’d always wanted to ask them.  Here are there responses.

Why are you such a meanie to Kim Deal?

Where IS your mind?

Riding the tide of the River Euphrates

This whole reunion thing is all about the money, isn’t it?

How many dancers will you have employed for this performance?

What’s with your arms being so weird?

You are speaking to 80’s- early 90’s Madonna so I don’t know what you are talking about yet.

Guy Ritchie is said to have compared sex with you to cuddling with Gristle.  As a G.I. Joe villains go, he’s…well, I could see where that would be unpleasant (see) but if you were going to compare Madonna sex to GI Joe sex, which Cobra villain would you choose?

Well, I have a confession to make.. This is an embarrassing question for me, because I’ve actually already had a fling with a Cobra.  A couple years back I met Dr. Mindbender while filming the Borderline music video. He wound up being cast as my Hispanic love interest and very soon there were sparks on and off the set..Unfortunately during the filming there was a dispute between the director & Dr. Mindbender because of artistic differences.  Words were exchanged and ultimately Mindbender was cut from the video and replaced by John “Jellybean” Benitez whom you see now in the video. I haven’t seen him since, but I hope he’s happy wherever he is.

If Joey Guerra attends can you make him karaoke with you to his favorite Madonna song?

I will be lip-syncing 98% of the set, but he can get up and vogue whenever he’d like.

Madonna is likely going to have some dancers and stuff but you guys actually had your music used for a ballet. Are you guys going to bring over the Royal Ballet and one-up Madonna?

No, we are the minimalist kings and queens and we will keep it that way, thank you very much.  Blues rock needeth no damn dancers.

Your music was featured in Guitar Hero and Rock Band.  Which one do you prefer and who is the best player between you two?

Plastic button guitars?  Surely you jest.  Seven nation army would have been better used in a yogurt commercial, see:  http://www.rollingstone.com/music/videos/jack-white-sings-about-yogurt-with-stephen-colbert-20110622

You guys are really weirdo incestuous siblings, aren’t you?

The Mummies [ed - Mikey and the Drags]

Will you guys come dressed as mummies and isn’t that going to be uncomfortable after a while?

You don’t need comfort when you have Rock and Roll!! We’re coming in full costume!!

You recorded a song in a furniture warehouse.  What’s the connection between furniture and rock and roll?

What kind of question is that?!?! You can’t have one without the other!!!

Does Steve still let you party at his house?

How is this in scale and scope to live aid?

Are you going to shave your eyebrows and go all pseudo-fascist for this show?

My eyebrows stopped growing back years ago. I hired Chinese specialists to train fuzzy caterpillars to perch above my eyes for most public appearances. Being rich is pretty great.

I grew bored with pseudo-fascism years ago; I used the money I got from Live Aid (which obviously didn’t go to feeding starving African children, did anybody really believe that?) to equip and train a standing army. So far all they do is march, salute my image and sing a few Boomtown Rats songs, but we’re working up to invading Wales. Wish us luck!

You killed  Michael Hutchence, didn’t you?

Morrisey called  Do they Know It’s Christmas? “tuneless” and  “the most self-righteous platform ever in the history of popular music” …  he’s kind of a dick, isn’t he?

Morrissey is a fat vegetarian.

Friday, October 26
False Idols: The Halloweening, featuring Young Mammals as The Pixies, The Wild Moccasins as Madonna, The White Strips as The White Stripes, LIMB & Pals as Kate Bush, Mikey and The Drags as The Mummies, Wicked Poseur as The Buzzcocks

A LOT OF THIS INITIALLY HAD TO DO WITH CAKE: AN INTERVIEW WITH ANDREW WK

NOBODY GETS FAMOUS UNTIL THEY LEAVE: AN INTERVIEW WITH MSTRKRFT