Leon casino, The ABCs of Death 2 may be the perfect Halloween movie release. A macabre series of vignettes helmed by 24 different directors speaks volumes to those looking for a little gore to liven up their existence. A brainchild of Alamo Drafthouse founder Tim League, The ABCs of Death showcases the talents of a couple of dozen directors and the hideous thoughts that circle their minds.

Each segment takes a letter of the alphabet and illustrates a story where death is involved. Some of the titles include “Amateur” or Capital Punishment” or “Zyegoat.” There is no overall theme other than the bizarre and grotesque; it’s kind of like a bloodstained Twilight Zone. We proceed from one Gran Guignol set piece to the next with nary a moment to catch our collective breath.

The main thought that occupies my mind after watching this exercise in mayhem is that, unlike, say, Saw or V/H/S or other series that seem to run out of steam after a couple of installments, The ABCs of Death has the potential to become the horror franchise of the future with as many sequels as there are letters of the alphabet. The ABCs of Death 2 is currently unwinding at the Alamo Drafthouse Vintage Park. 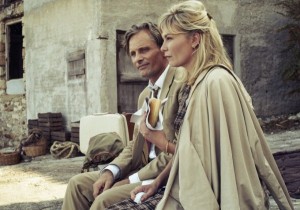 Another exclusive theatrical engagement is The Two Faces of January, playing at the downtown Sundance Cinemas Houston. The title refers to the duality and hubris of man, and face of the God Janus as he looks both to the future and the past.

Since the movie is based on a novel by Patricia Highsmith, you know the story involves one corrupt individual influencing another person to do things beyond the realm of their personal morals. Other Highsmith adaptations include The American Friend and The Talented Mr. Ripley, so you realize you are in good company. The Two Faces of January stars Viggo Mortensen, Kirsten Dunst, and Oscar Isaac.

Set in the early 1960s, we follow an American couple on the run in Greece and the connections they make with a fellow expatriate. Complications ensue when a private investigator unmasks the con artist duo and said investigator meets with an unfortunate accident. Great use of ancient buildings like the Parthenon and other similar structures. If there’s a visual motif that runs throughout the film it’s the fact that whenever somebody does something wrong they always manage to do it in plain sight of witnesses.

Houston Mayoral Race Neck and Neck on the Home Stretch

ANGEL OLSEN: YOU ARE NOW ABOUT TO WITNESS