Leon casino, It may be easy to have doors opened for you career wise when your father is the world’s most famous comedian, not to mention that your maternal grandfather is one the world’s foremost dramatist. Yet with an acting resume that includes over 140 movie and television roles Geraldine Chaplin has literally never stopped working since her debut role.

Chaplin was in town last weekend promoting her latest film, as part of the MFAH’s annual Latin Wave series. “At this moment I’m in love with Dólares de arena,” says Chaplin to Free Press Houston. In addition to Dólares de arena, Chaplin also hosted a screening of Charlie Chaplin’s 1921 The Kid. 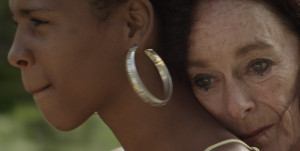 Speaking about Dólares de arena also titled Sand Dollars, helmed by the team of Israel Cárdenas and Laura Amelia Guzmán, Chaplin remarks: “I had seen the directors’ previous film. I was thrilled when they got in touch. It’s based on a French novel, which happens in Samoa in the Dominican Republic. And this writer had had an affair with a young motorcycle driver. Money passes hands.”

The script got revised when they couldn’t find the right actor so they changed the characters “to an old lady and a young girl. It’s a bit about the very fine line that one has to walk between love and abuse, on both sides. This is a very old European rich white lady who’s having an affair with a very young black Dominican poor young girl. The power of the money is on one side. On the other side the enormous power of youth,” says Chaplin. “It’s about old white wrinkly skin and beautiful black smooth skin. It’s a beautiful beautiful movie.”

Answering questions at the screening of The Kid, Chaplin wore sunglasses in her hair, glasses around her neck along with a turtle pendant, a black sweater and black slacks with a loud yellow shirt depicting a certain cartoon character. Chaplin cheerfully answered the queries most of whom were from youngsters. Questions like why was the film in black-and-white and silent, or why was she wearing a SpongeBob shirt? “I don’t even know who that is, but I really like the colors.” 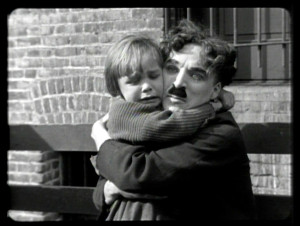 Chaplin had directed his own films since 1914, some uncredited but it was The Kid (1921) that marked a turn in his style. “People at that time said you cannot do slapstick and drama together because one thing will kill the other. And my father said, ‘I’m going to do it.’ In fact he turned out a movie that breaks your heart, that’s incredibly funny, that uses slapstick, and drama and reality. It’s the first film of his where you actually care about these people, because of the drama.

“The Kid took 18 months,” says Chaplin. “He had to stop a couple of times during the production because he had a contract with First National to finish A Day’s Pleasure (1919).”

Geraldine was traveling abroad with her parents but was too young to immediately realize the implications of what happened next. “We went off to England on the Queen Elizabeth for the premiere of Limelight, an in the middle of the cruise in the Atlantic he got a telegram denying his reentry. We never knew that,” says Chaplin about her and her siblings. “Our parents were extraordinary, they never told the children. So it was a long holiday. We went to the premiere then we went to Switzerland, then we went to someone’s farm and we were there for a while. But we never knew he’d been kicked out of the country. I think we would’ve been gobsmacked.

“I found out when I was 14 or 15. Someone in school said: ‘Your father was chucked out of the United States because he was a communist.’ At that time I myself was a solid Marxist, and I was like Yeah!”

Chaplin notes that not everything in her father’s autobiography was true. Like a passage where he says he had money buried in the backyard. “No my mother went back and got money and bonds from the bank. If there’s money in backyard it’s still there. Imelda Marcos lived in the house afterwards,” laughs Chaplin.

While Geraldine had appeared as a child in Limelight, Chaplin’s first film as an actress was a French crime drama opposite Jean-Paul Belmondo. Her second movie just happens to be one of the classic romance epics of cinema - David Lean’s Doctor Zhivago (1965).

Lean was on an airplane and saw Geraldine on the cover of Jour de France magazine. “It’s not even a magazine David Lean would even look at. He was probably bored on the plane. And he thought ‘Oh, she looks Russian. Charlie Chaplin’s daughter, maybe she inherited some talent. Let’s find her agent,’” says Chaplin. “I fell in love with my profession during that film. I wasn’t overly impressed with Alec Guinness, I knew who he was but it wasn’t a big thing. And Omar Sharif was incredibly handsome, and of course I remembered him from Lawrence of Arabia,” Chaplin says referring to Lean’s previous film.

“In those days when you auditioned you had a costume, and a set and you were directed in the scene, nowadays they do it with a portable camera. I was very nervous, I remember Lean coming down the stairs and saying ‘Oh Geraldine I don’t speak Spanish and these are not my crew, I don’t know the cameraman.’ I told him don’t worry I’ll translate everything for you. So I was so involved with translating for him that I got un-nervous about what I was doing.”

As a director Chaplin recalls that Lean “would wait for the muse, take a lot of time. He’d go off and smoke a cigarette. No one could hurry him. Sam Spiegel [Lean’s producer on Lawrence and The Bridge Over the River Kwai] would go berserk. Carlo Ponti on Zhivago was having hearts attacks,” says Chaplin metaphorically.

“Lean was slow but he wanted what he wanted and he didn’t stop until he got what he wanted. He would not have any kind of contact with any of the actors except on the set. He always lived in a different hotel. He wouldn’t have meals with us. We became very good friends afterwards and I asked him about that. He told me ‘I don’t mix with actors on a film I am doing because you actors have very strong personalities and I don’t want those personalities to rub off on what is in the script,’” says Chaplin.

“I remember a train scene, and we’re going through a burnt village and there’s a woman with a baby and she’s holding the baby and she has to run after the train. Well the woman fell down between the train and the tracks and her legs were cut off. It was horrifying. It was a terrible accident. They took her away and David Lean says ‘Dress the double.’

“We all thought how heartless. But what could you do. Stop production. No. Dress the double; we’ve got to get this scene. He was a director, the film is everything.”

In the 1970s Chaplin appeared in several films that remain classics to this day, among them Cria Cuervos, Nashville, Remember My Name, and The Three Musketeers. “Nashville is a brilliant film. And it’s so today, and there’s an election coming up,” says Chaplin. “Nashville should be brought back because nothing is old about it. On the set everyone is trying to please Robert [Altman] because he is the best audience. He would almost never say ‘cut.’ He would give you such freedom. What you thought was freedom – he would make you think you invented the scene. But you were doing just what he wanted you to do.

“In the evening we would go see the rushes. Everyone was allowed to rushes, not like some directors. There wasn’t popcorn but there was marijuana, there was wine, there was beer and food. Everyone would admire everyone else. There was such a great ambiance between the actors. He would have us all living together and then he would have a big house where we would go to party. It was all very well arranged – to work with him was such a pleasure.

Regarding director Richard Lester and The Three Musketeers, Chaplin recalls: “We shot one film and then the gangsters, they made two films out of it. The gangster eventually married my sister,” adds Chaplin about one of the film’s producers, Ilya Salkind. 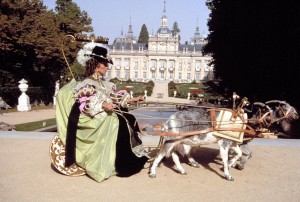 RETURN OF THE MUSKETEERS, Geraldine Chaplin, 1989

As talent Geraldine was only paid for one film. “We sued them and won. If you look at the script it says Intermission. But that intermission was actually the end of the first film and the second one was called Milady’s Revenge.” [The Four Musketeers: Milady’s Revenge (1974)] The first two films had an incredible array of actors and movie stars. But the rapport among the cast was not the same as on an Altman set. “In particular, Faye Dunaway and Raquel Welch had this thing going. They were not too happy with each other, a bit competitive. Also it was shot more like a conventional film, we weren’t all working together, we were all living in different places. I was living at home because it was shot in Spain,” says Chaplin. “Now on an Altman set you want to be there when you’re not filming.”

Alexander Dumas had actually written a sequel to his Three Musketeers series set a generation after the fact, and aptly titled Twenty Years Later. “And then we made another one after that,” says Chaplin referring to The Return of the Musketeers (1989), which united the original cast and director Lester. “There was tragedy during the filming because one of the actors fell off a horse and died.”

Chaplin’s daughter Oona Chaplin continues the family tradition with credits that include Game of Thrones and The Longest Ride. Referring to the latter film Chaplin says, “At the end of the movie they’d given her this portrait.” The painting she mentions plays a major plot point in The Longest Ride’s third act. “And she sent it to me. I didn’t want this. I hadn’t seen the film. Then it arrived and it’s so beautiful. We have it hanging in our living room,” says Chaplin. “It was the winner of a competition of eight-year old children, and this one won.”