Decrease Font SizeIncrease Font SizeText SizePrint This PageSend by Email
Peter Bogdanovich has been a constant force in movies since the 1960s, first as a critic and movie historian and then as a successful director. His latest film the screwball comedy sex farce She’s Funny That Way finds Bogdanovich in familiar territory.

Leon casino, Bogdanovich hit big with his second feature The Last Picture Show (1972), which was nominated for eight Academy Awards, winning two. Many of his films since have mined classic comic tropes and She’s Funny That Way is no exception. Owen Wilson headlines as a Broadway director who has a thing for escorts much to the dismay of his wife (Kathryn Hahn). Hahn and Rhys Ifans play actors in Wilson’s latest play, along with Will Forte as the playwright and Jennifer Aniston as Forte neurotic girlfriend, who also happens to be a therapist.

Imogen Potts shares top billing with Wilson as an escort who also auditions for his play and at the insistence of Hahn gets the part of a prostitute. In a methodic manner everyone soon learns about everyone else’s dirty laundry.

Owen Wilson’s character is named Arnold Albertson but he uses the pseudonym Derek when he is with an escort. Is this a reference to the name Derek Thomas, a nom de plume Bogdanovich used on a Roger Corman picture titled Voyage to the Planet of Prehistoric Women?

“Let me clarify that, I didn’t make that film,” Bogdanovich tells Free Press Houston in a phone interview. “It was a Russian science fiction movie that Roger bought and which AIP wouldn’t buy from him until there were women in it. It was all male Russian astronauts on Venus. Roger asked me if I would put some women in it. He’d already hired Mamie Van Doren. I shot for about a week down on Leo Carillo Beach, which Roger thought would be a good match for the Black Sea. For some reason people think I directed the whole thing, but I certainly only directed about 10-minutes of it.”

She’s Funny That Way begins with an allusion to the Lana Turner story of how she was discovered at a soda shop. In a way this reiterates the line from John Ford’s (one of Bogdanovich’s favorite directors) The Man Who Shot Liberty Valance: “When the legend becomes fact, print the legend.” 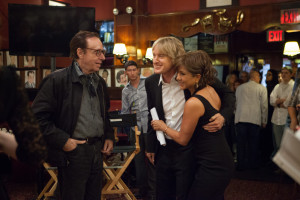 This leads the conversation to Bogdanovich’s 2001 film The Cat’s Meow, which purports that Randolph Hearst shot silent film director Thomas Ince aboard his yacht in 1924, a contradiction of the cover story that Ince died shortly afterwards of intestinal problems.

“Nobody knows, that was the report,” says Bogdanovich. “That was what the Hearst people put out there. But that doesn’t explain why people saw Ince being carried off the boat with a bandage around his head. There are a lot of questions about that. I can’t swear that our version is absolutely the correct rendition of what happened. But it is something that was told to Orson Welles by Charles Lederer, the writer, who was Marion Davis’ nephew. He told the story to Orson who repeated it to me.”

Welles is another classic director that Bogdanovich wrote about on more than one occasion. Welles’ famously unfinished film The Other Side of the Wind is currently being completed with Bogdanovich as part of the restoration team with the hopes of finishing this year the 100th anniversary of Welles’ birth.

“I’ve been saying this for almost 30 years. I don’t know if it’s true or not anymore. But I think we’re going to start cutting in September,” says Bogdanovich. “Everything seems to be poised to go forward. They have the money, and are still working on some of the rights problems, clearing titles. But it should work out.”

Bogdanovich actually started in show business in the 1950s as a teenage actor. “That was live television in New York, I didn’t do that many – they were those anthology shows,” recalls Bogdanovich. “One was an adaptation of a Hemingway story called Fifty Grand [Kraft Theatre, 30 April, 1958] that was directed by Sidney Lumet.

“Another show was directed by George Roy Hill. When I was still a teenager I did a lot of acting in summer theaters. For four summers I went to various theaters around the country, Massachusetts, Michigan, and Connecticut, and a summer in New York at Shakespeare in the Park That was all before I was 19.”

She’s Funny That Way was shot in 29 days in New York City at locations including The Cloisters, a museum of medieval art. “I didn’t think they’d let us shoot there but they did,” says Bogdanovich. “We had to work in their time frame and we couldn’t use very bright lights because of the tapestries.” The film also contains a hilarious bit where for no reason a cab driver just stops driving and walks away from the car. “It was a New York moment.”

She’s Funny That Way was executive produced by Wes Anderson and Noah Baumbach. “They call me Pop which I tolerate because I call then son Wes and son Noah,” says Bogdanovich. “They work together, but I got to know them separately, first I met Wes then I met Noah, and have a relation with each of them separate from the other. It was a big help having them as executive producers, to take me to their agency UTA [United Talent Agency] that helped get money together for the film.”

Bogdanovich also uses a cameo with Quentin Tarantino near the end of She’s Funny That Way. “Quentin and I get along. I stayed at his house for a while, he was very kind to let me stay there. I didn’t have a place to stay for a while.”

In the grand scheme of things it’s the eternal return of the circle of Hollywood life. Bogdanovich had let Orson Welles stay at his house when he needed a place to crash. “Orson stayed with me off and on for a couple of years. He was often there between 1972 and 1973, ’76 and ’77, something like that.” 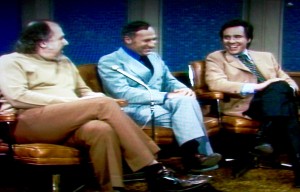 One of my personal favorite Bogdanovich appearances was as a guest on the Dick Cavett Show from January 21, 1972. The guests included Robert Altman, Mel Brooks, Bogdanovich and Frank Capra. “At the time I didn’t know any of those guys except Capra. I had interviewed him for a Jimmy Stewart piece I did for Esquire. I didn’t know Mel at that point at all and I didn’t know Bob Altman. I got to know Mel later, I helped him with questions about black and white film for Young Frankenstein. He liked some of my actors and I liked some of his.

“One of the funniest things about that Dick Cavett appearance was that I remembered it after I had done it and thought that I hadn’t said anything,” says Bogdanovich. “I thought I was very quiet. When I saw the goddam thing recently I realized I talked my head off. I even told a Leo McCarey story when we were running out of time.”

She’s Funny That Way opens nationally in theaters today as well on VOD.