Decrease Font SizeIncrease Font SizeText SizePrint This PageSend by Email
The Houston Cinema Arts Festival spaces out for real on Friday, November 13. Cinespace Day at the MFAH unwinds an entire day of films as well as an installation titled Apollo XVIII.

Leon casino, The art installation is the brainchild of visual artist Marco Brambilla, whose credits include the action sci-fier Demolition Man. The films start at 1 pm. with A Year in Space, an episodic documentary about Scott Kelly currently half way through his one-year mission in space on the International Space Station. 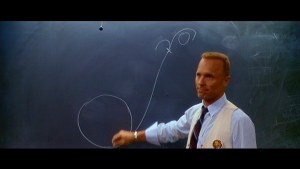 Next at 3:30 pm. is an encore screening of Apollo 13 (Failure is not an option!). Attending with be screenwriters William Broyles, Jr. and Al Reinert along with the book’s author Jeffrey Kluger. The screenplay was adapted from the non-fiction best seller Lost Moon that Kluger penned with astronaut Jim Lovell (played by Tom Hanks in the movie). Apollo 13 was nommed for nine Academy Awards, winning two for sound and editing.

The evening films start with Cinespace, a collection of 16 short films (pared down from 194 entries) that incorporate imagery from NASA’s archives. The winners will be awarded money prizes and be presented by Johnson Space Center director Dr. Ellen Ochoa, astronaut Don Pettit, and ISS manager Kirk Shireman.

The evening concludes at 9:30 with a short film that has wowed audiences for the past year on the film festival circuit, Satellite Beach with filmmakers Andrew and Luke Wilson introducing their film.

In September of 2012 the Space Shuttle Endeavour landed at LAX and for the next few weeks a pathway was paved to tow the shuttle to its new home at the California Science Center. Literally hundred of trees and utility poles were trimmed or removed to allow the shuttle to travel to its destination. The trip took place from October 11 through 14, 2012 traveling down roads like Prairie Avenue, Crenshaw Boulevard and the Manchester Bridge. 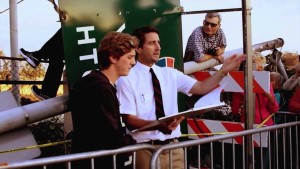 “Luke had seen an article in the L.A. Times the week before it was going to happen,” Andrew Wilson says to Free Press Houston in a phone interview. The brothers who had previously co-directed The Wendell Baker Story (2005) came up with the genesis of a short subject where Luke would be filmed along with the shuttle. The hook being Luke carries a clipboard and interacts with news crews and the crowd as if he’s in charge of the project.

“There were times when there was so little clearance room that people in apartments could reach out their hands and touch the shuttle as it passed,” says Wilson. One of the running jokes of the film has Luke talking to foreign television crews in their native language. “That was my idea,” chimes Wilson. “Everyone played along.” The crew even got footage of Luke interacting with Los Angeles Mayor Antonio Villaraigosa.

The shuttle was towed by robotic dollys but for the Manchester Bridge, for weight reasons the towing vehicle was switched to a Toyota Tundra. “That was actually shot for a Super Bowl commercial and if you know where to look you can see Luke in the background,” says Wilson. The shuttle itself weighs 292,000 pounds.

Andrew starred in Wes Anderson’s debut film along with his brothers Luke and Owen. “The film that people always ask me about is Bottle Rocket,” says Wilson.

The Houston Cinema Arts Festival continues until November 19 and includes a live performance and dance off with Kid ‘N Play at Brasil, Saturday night starting at 9:30. A complete schedule can be found on the HCAF website.

My Wingman — Cheech vs Chong