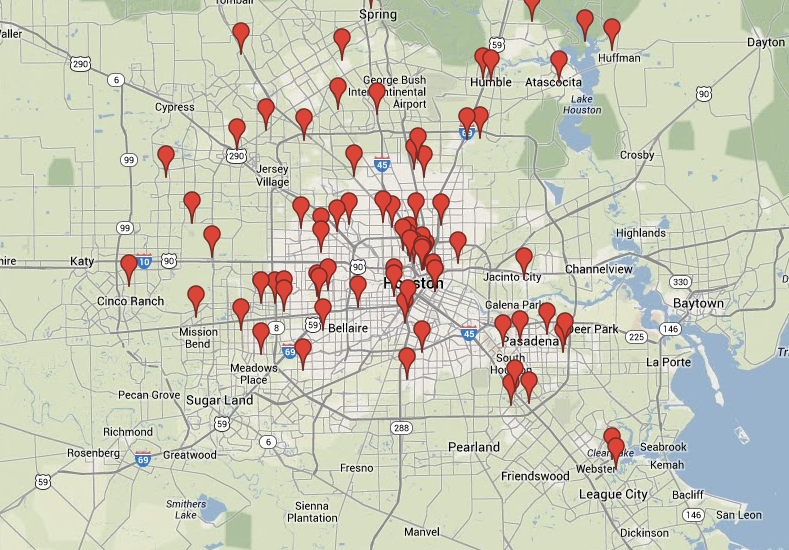 Houston is a bit different from your typical TV cop drama, where all the heroin addicts die in vacant buildings, wearing urine-stained clothes.

The story here is more eclectic: There’s the 22-year-old who died of a heroin overdose last year inside a golf course home in North Houston not long after a 20-year-old overdosed at a aging two-bedroom home near a downtown flea market. A few months later, a 23-year-old followed, with a view of the Galleria from his condo.

Of the 46 people in Houston who died of a heroin overdose in 2013, only one was classified as “homeless” in the toxicology reports by Harris County Institute of Forensic Sciences. The majority died at home.

A young Robert Martinez had every opportunity to do the same.

A teenager in the early 1970s, he grew up in the historically Hispanic neighborhood of Magnolia, a lower-middle-class area near the shipping channel that shared a kind of tight-knit happiness, as well as a healthy supply of neighborhood heroin.

Heroin addicts in the neighborhood were more common than street signs. “We were around it everyday,” said Martinez, now 59. “I guarantee you at least one adult male was using heroin on every block, sometimes several. It was an epidemic.”

As a teenager, his dreams of the future included a high-paying job to afford a Cadillac like his uncle and shoes by Stacy Adams, a status symbol in the neighborhood. But he started using heroin at 17 years old, with brothers and cousins, and so for the next 15 years, he had other priorities.

In 2010, the Houston division of the U.S. Drug Enforcement Administration seized about 33 kilograms of heroin – the weight equivalent of an average 11-year-old boy. Last year, agents seized four times as much.

The Central American production of so-called Mexican black tar – the most common type in Texas – is a “bathtub chemistry project,” said Stephen Whipple, a DEA special agent overseeing the Houston area. How it gets stateside is criminal ingenuity.

DEA agents have busted traffickers stuffing the drug inside hollowed-out car axles, sometimes re-canning it inside legitimate Mexican food company containers. Other times, it’s double-bagged in a condom to be swallowed and shit out. A few times, it was stuffed inside the bodies of dead dogs or babies, Whipple said.

“If people knew how this stuff comes into the country a lot of the times. They might think twice.”

Consumers don’t seem to mind, with more buying and overdosing every year from all walks of the socioeconomic life, the young especially.

The number of people who died annually of a heroin overdose in the Houston area has increased each of the past four years – from 17 in 2010 to 46 last year – and nearly half of the 108 who died were under 30 years old. Philip Seymour Hoffman, 46, was older than most.

“We need to be educating kids that heroin is not cool,” said Dr. Jane Maxwell, a University of Texas professor and 30-year researcher of statewide drug use. “I think the word hasn’t gotten out there.”

Academics, rehab clinics, and law enforcement blame the rise in heroin use to the crackdown on pharmaceutical painkillers.

It’s been gradual: In 2010, the Food and Drug Administration approved a new formula for the time-release painkiller OxyContin that blocked its high levels of oxycodone from being immediately released. The next year, two laws designed to eliminate doctor shopping and prescription fraud went into effect. Last year, some 14 law enforcement agencies launched its so-called “King of the Pill” operation, busting some 37 pain clinics and nine pharmacies in pill mill raids.

But cutting the flow of illicit pain meds has inflated the street cost of desirable painkillers like oxycodone and hydrocodone, making it not only less accessible but more expensive than a needle-shot of heroin.

“Prescription drugs are expensive,” Maxwell said. “And heroin is cheap, and getting cheaper and cheaper.”

Top-shelf doses of pain pills go for as high as $70 on the street, while the heroin-equivalent goes for $20, according to DEA price data. In two years, the price of black tar has dropped by 40 percent.

Despite accidentally creating a new market for heroin, the DEA doesn’t plan to stop its pursuit of illicit pharmaceuticals, Whipple said. Instead, the agency is seeking harsher sentencing guidelines for shady doctors similar to what a street dealer would face.

“In reality, it’s the same thing,” he said. “You just have an educated drug dealer versus a guy that came up on the street.

“We have to make it very painful for the bad pharmacists and the bad doctors … They tend to think about the consequences of their actions more so than a thug would.”

The state audits, the accreditation requirements, the growing body of paperwork. Methadone clinics are burdened by the ever-growing involvement of state regulations, according to John.

“Years ago, we didn’t have so many rules,” she said. “And they change them so quickly.”

Patients can take home a 30-day supply of methadone, but only after earning it with daily trips to the clinic starting at 5 a.m. Having to wake up as early as 4 a.m. to drive 20 to 30 minutes across town is more than some can do, John said.

“The patients who are in treatment go through a lot,” she said. “A lot of them just aren’t ready to get up and come in every morning … it’s easier to just go buy heroin on the street.”

Or even methadone. Clinics look bad when police bust a supply of illicit methadone, but it’s not necessarily their fault, she said.

“There’s a lot of illegal methadone on the street because they get it from a physician,” she said. “It would be nice if the doctors were held to a higher standards.”

Abuse potential of methadone assures that strict state and federal oversight of the drug aren’t going away, Maxwell said, although there are more options for recovery nowadays.

The options include pharmaceuticals like buprenorphine, which is available through a general physician and have less abuse potential than methadone. Naltrexone, another pill, binds to the opioid molecules in the brain that would otherwise be satisfied by heroin. In other words, if you shoot heroin, you feel nothing.

The general physician route is great for a young, recreational heroin user, she said, especially one covered under health insurance.

“I love methadone clinics, but those are hardcore boys. I’m not sure I would want to send a 16 or 17-year-old there if there are other ways to treat them.”

Three of his children born during his 15 years of drug use were often cared for by their grandparents. At 32, he entered rehab after a plea from his parents, who would bury two of their children from an addiction to one drug or another.

Being clean meant appreciating the little things, like the color of a lawn, he said.

“Hell, even the smell of a cup of coffee … to actually listen to another person talk, and not be thinking how you’re going to get your next bag of dope. You don’t do that when you’re using.”

A licensed interventionist, Martinez owns two extended care homes for substance abuse recovery in Houston. He rarely said the word “addiction” without first saying “the disease of.” If a family member has diabetes or cancer, you gather around and pry. He preaches the same for addiction.

“People will say, you don’t have to help him. You got to let him or her hit rock bottom. Bullshit. If you let him hit rock bottom, you’re going to bury him.”