“I have this feeling,” my friend slurs through a cloud of deep sedation, “that these noodles are lodging in some weird space behind my jaw and it’s going to build up and kill me.”

She has just come from the dentist and her mouth is numb. I am her ride. We’ve stopped at the Denny’s on 610 at TC Jester to check out their recent renovations. This is the first Denny’s location in Houston that has been redone as part of Denny’s new “Heritage brand re-imaging campaign, “ which seeks to remodel 70% of the chain’s locations by 2018 with “all-new, locally-inspired design and diner menu[s].” 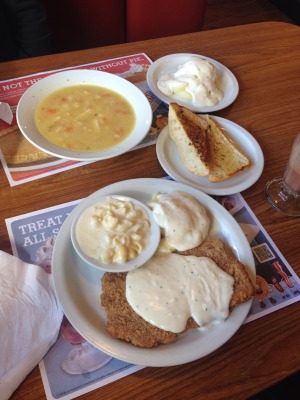 I have dragged my drugged friend to Denny’s to check out how an internationally-franchised corporate chain stakes a claim to authenticity through a “locally-inspired design and menu.” So far, as far as we can tell, the only thing that sets this Denny’s apart from any other Denny’s is a large photo-mural of the downtown Houston skyline. The waitress tells us the booths and light fixtures are new and a wood laminate floor has replaced the old carpet, but none of this is particularly “Heights,” “Oak Forest,” “Northwest Houston,” or even Texan or Southern from what we can tell. The menu, likewise, features nothing particularly local that can’t be found at any other Denny’s.

My friend reaches into her mouth a pulls out a wad of cotton-batting soaked in blood and chicken broth. Turns out it wasn’t noodles.

We cackle. I tease her about the tampon she’s been chewing on. She open-mouth gums some mashed potatoes and takes a pull off her chocolate shake. She has ordered all  soft-foods and I am eating chicken fried steak, because despite this Denny’s’ failure to live up to its promise, I’m still trying to keep it local. (Thank you, Robb Walsh, for all your words about CFS. We should have gone to the Triple A, I know.) 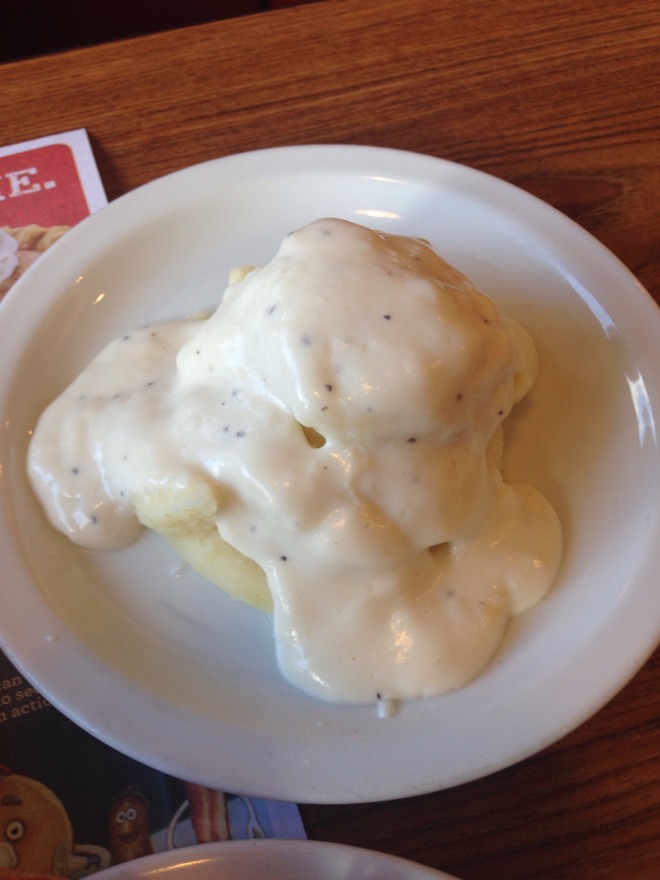 I had spent the morning at the dentist’s office, waiting for this friend. Her dentist’s fancy coffee bar had been one of the selling points she used to ask me for a ride, so I thought I’d dress up the black coffee I brought from home with a little cream and sugar, except there wasn’t any sugar, only Splenda and Sweet & Low. So, only because I was feeling fancy at a fancy coffee bar, I searched inside the drawers and cabinet. When I failed still at finding sugar, I jokingly asked the receptionist if sugar was banned from the dentist’s office.

“It’s right there,” she pointed to the bowl of artificial sweeteners.

Her coworker intervened, dug around in her purse and brought out a few packets of real sugar for me.  My point is not about sugar, though, my point is that a grown person did not know the difference between sugar made from plants and artificial sweeteners made from chemicals. (Yes, I know that granulated white sugar is highly refined product, but still. Chemicals. Barf. I’d rather take it unsweetened.) 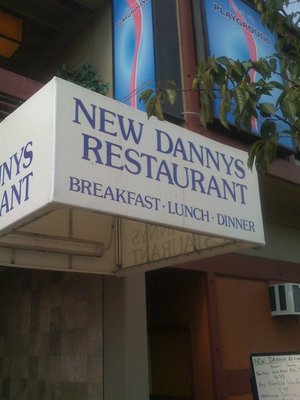 There was a Denny’s near the apartment where I lived during graduate school. It was in San Francisco’s Japantown, in a building meant to evoke Japanese architecture, but the interior was all neon-lit with seafoam and fuschia booths and the walls were painted similar, loud colors. My buddy and I called it Miami Denny’s.

I think the owners got sick of paying the franchise fee, so Denny’s became the knock-off “Danny’s Restaurant,” and then I think they got bullied by Denny’s because Danny’s Restaurant became “New Danny’s Restaurant.”  Through all that, the interior stayed the same and we continued calling it Miami Denny’s. And apart from the weird 80s color scheme, Miami Denny’s was like any and every other Denny’s populating truck stops and strip malls across the late-capitalist, post-modern, Corporate States of America.  Too bright light and oversized portions of standard American fare.

Just one block away from that place that was so at odds with its environment, from the Miami Denny’s in the heart of Japantown, was Benkyo-Do, an actual, authentic (Japanese-)American diner dating back to 1906 that sells coffee, cereal, donuts, and mochi — counter seating only. Old people go in there to read the newspaper. The coffee kind of sucks, but the donuts and mochi are good enough to stuff in your pockets to nosh on all day.

I feel bad modifying “American” as “Japanese-American” when referring to the more authentically-American diner. Benkyo-Do had been standing on that corner of Buchanan @ Sutter for 47 years before the first Denny’s even opened it’s doors — 108 years of independent ownership vs 61 years of corporate ownership, but still, one gets a hyphen and the other gets to call itself “America’s Diner.” 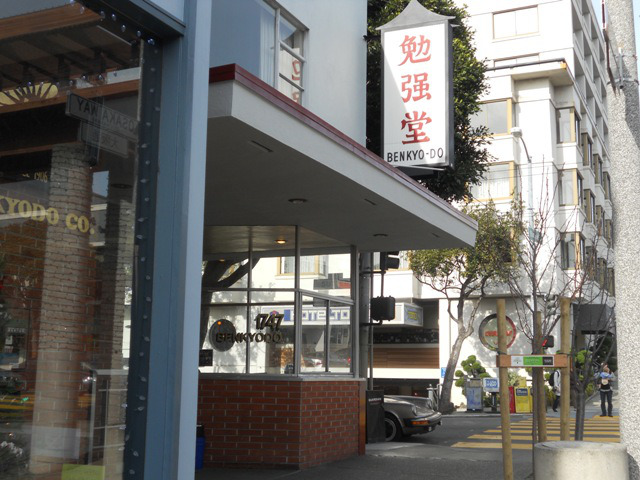 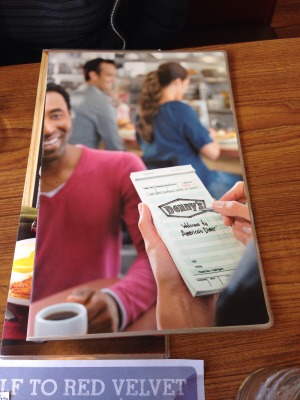 Though this recently remodeled Houston “Heritage” Denny’s doesn’t seem too different from any other, my friend was recently in California where she visited two other such Denny’s in Granada Hills and Burbank. Those locations had a newly designed menu (look, not food), which featured photos of Denny’s customers in 1953 beside customers of today. The photos from 1953 — couples on dates, sock-hopping teenagers at the soda counter, parents with their children — featured exclusively white people. The more recent photos, on the other hand, are much more “diverse.”

We don’t have those pairs of images to compare at this location, but the only people depicted anywhere on the menu are on the cover — a smiley, clean-cut, black man with great teeth who is likely very “articulate,” and what looks like a toothy white guy hitting on what could be a Latina in scrubs.

What is this authentic “Heritage” to which Denny’s is laying claim? When I was coming up, Denny’s was more Cracker Barrel than the Cracker Barrel. They were known for their Grand Slam Breakfast, but they were even better known as a racist restaurant chain that refused to serve black Secret Service agents who were guarding the president in 1992 and paid $54 million to settle a class-action lawsuit with it’s African American customers for ongoing discrimination at locations from the Deep South to California.

But people can change, and so can corporations, I suppose. Denny’s has all kinds of current stats on minority franchise owners, suppliers, and employees.

Our waitress here in Houston was exceedingly nice. She’s a recent transplant from the Rio Grande Valley; been in Houston less than a month. She said she was having a bad day and our goofiness had cheered her up, so she comped us the chocolate shake.

I was glad to note that they had real sugar as on option on the table, and I’m glad I got that visit out of the way because next time I’m going to the Triple A. 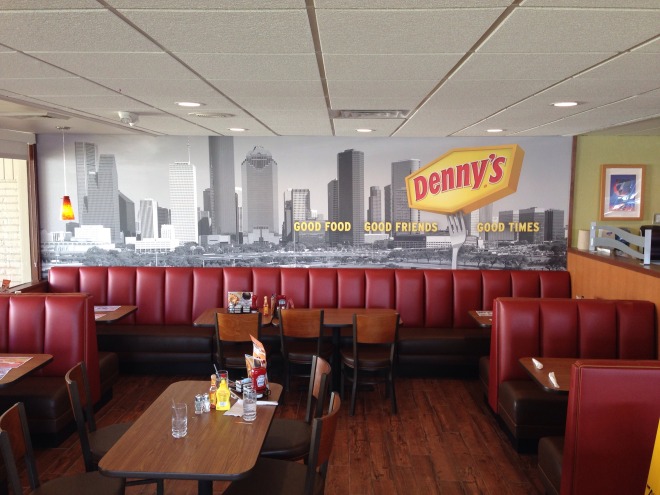