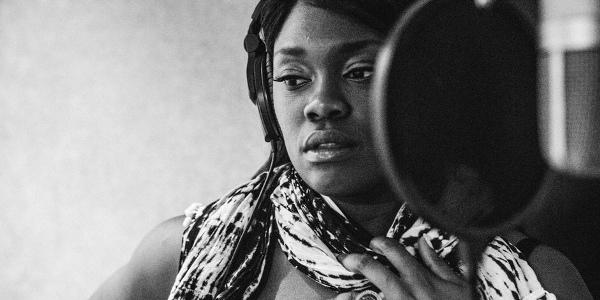 The most beautiful thing about Houston, is that our city is a melting pot of people from different places and different cultures; many of whom have talents that they bring with them.  You realize this when you taste a different type of food, or you find a different article of clothing.  But sometimes, its so much more, so much deeper; that when you pay attention, you find hidden gems.  A great example of this would be the band, Moji.  Their sound is like a mix of jazz, soul, and a hint of rock n roll that’s one of the more diverse and entertaining things you’ll hear in a good while. I won’t be shocked if you’ve never heard of them, but I would be shocked if you didn’t like them at first listen.  You see, the band’s singer, Moji Abiola; has the kind of credits that many artists work a lifetime for.  An appearance on The Late Show with David Letterman, and several mentions and reviews in the New York Times; you wouldn’t know that when you meet her.  Zero pretension and zero attitude, Moji makes you feel welcome when you’re in her presence.  Two weeks ago, I was invited with others from the media world to watch them record their upcoming EP.  What I left with was an insight to what could be Houston’s next big thing.

SugarHill is so much the same, yet so different from what it once appeared to be.  The front room is still filled with cases that hold the gold records from their efforts, and the halls are still adorned with a small glimpse of who’s recorded there; but it feels stronger than I remembered.  Things were to get going at 9:00 after a brief meet and greet with the band, but they didn’t really get started to closer to 10:00.  Moji, is a three piece comprised of drummer David Garcia, Moji Abiola on lead vocals, and guitarist Troy Creagh.  The band, is magical to watch and listen to perform.  I remember thinking of the energetic realms in which the drums thumped, the guitar swayed, and Moji’s vocals had an almost angelic sense to them.

Things stop, as they often do when a band records a song. After some redone versions of things, how the drums sound in the vocal booth, what parts and pace to utilize, and they’re back on.  Watching how the band interacts with engineer Josh Applebee gave the feel that this wasn’t their first time working together.  With the first song, “Cease Fire,” the drums came across with their intentions known.  Garcia created a sound that was like an organized drum circle, while Creagh’s guitar slinked in and out.  The way Moji sings, she’s the most obvious sound in the mix, the power in her voice and her inflection is immediately felt by everyone in the engineering booth. Her vocal style is soft and breathy, while her intensity is felt with each note. When she holds a note, it’s obvious this isn’t her first rodeo.  The band’s excitement as they play is felt throughout the feverish tracking; being done live in execution. When the take ends, it feels like everyone around me doesn’t know how to explain what they’ve just seen.

When they regroup, the vibe of the second song they record, “Constellations” has a very different vibe. Sultry, smoky vocals run atop a smoothly veiled slip of sound. The guitar mixed with thunderous drums is peppered by Moji’s sexy vocal track. She uses the opening chorus as an excuse to slip powerful vocal bursts in one of the most strong ways possible.  The guitar runs up & down the fretboard like he’s running from the law. When there are breaks, they’re mixed with her sex appeal based vox. The drums crash in and out of the verse and allow Moji to come in and out with jaw dropping intensity.

The operatic grace in which she sings, on the third track, “Free” (alternate ending) sounds like a powerfully haunting ghost who will never leave your dreams. The funky vibe of the track, had such an amped up Motown meets SugarHill of years past feeling. The precision between the three is mesmerizing, as they sashay through the song without ever missing a beat or cue. The break point on the track, things slow, and the guitar takes a rhythmic flow while the drums thunderously pace out the song. Natural distortion of a guitar thru a bass amp, are followed by a meandering guitar that has the feel of something played by Flea. When Moji reaches deep, she finishes loud and proud.

The final song, “Paris” starts out like a Sergio Mendes tune. Complete with a softly played drum track and Moji’s softly placed vocals. She uses an airy demeanor in how she sings the track with definitely a loving sound to them. When the chorus drops, there’s a bit of ferocity until she squeezes all of the honey from each note. There’s definitely a hint of Sade channeling throughout the vocals. The track reaches a dirtier feel towards the song’s closing end, before heading back into the Barney Kessel meets Sergio Mendes feel from before.

After watching all of this, I realized that there’s a great chance that Moji could be the next big thing to come out of Houston.  The versatility of the band, the way they feed off one another, and the power of the trio as a unit is immense and hard to ignore.  The overall sound of the group emotes that vibe of cool breezes outdoors on a crisp Autumn evening.  Luckily for you, Moji will be performing in just that type of setting on Saturday October 18th at Discovery Green.  The band will be a part of the Green Flea by Night market, and they perform for FREE at the all ages event from 7:00 to 9:00.

ELISA AMBROGIO: THE SUBSTANCE EXPANDS AND FILLS THE SPACE