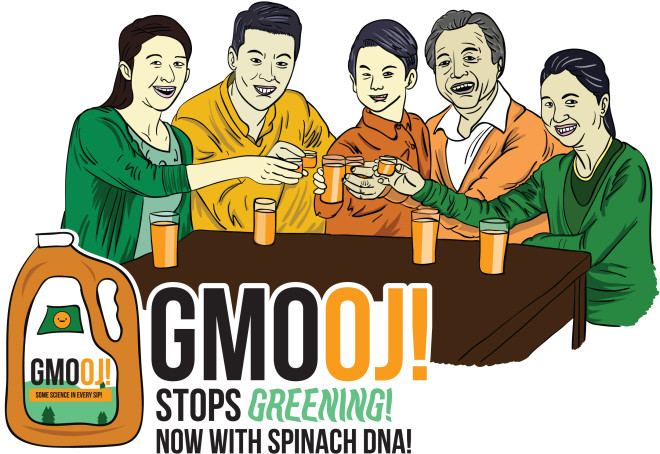 Are your concerns about genetically modified organisms (GMOs) justified, or are you just freaked out by ‘frankenfoods?’ Recently, The New York Times ran a story about Citrus Greening Disease, which has been wiping out the world’s orange crops. The article says to defeat the bacteria that cause the disease, we just need to splice in a little DNA from our innocuous green friend: spinach. Since the alternative is dumping more and more pesticides on orange trees, the GMO option indeed seems ‘greener.’ The article tells us there’s only one thing getting in the way of our toasting the morning with a cold glass of gmooj — our own irrational fear.

A generation ago, in what is called the Green Revolution, pesticides were promoted as a solution for world hunger. These pesticides have built up in soil, the water, and in our bodies, and spread to the farthest reaches of the planet. Today, commercial GMOs are promoted as useful to prevent starvation, and to allow farmers to use less toxic pesticides. Apparently, a new round of planet-saving technology is needed to save us from the previous round.

Today, virtually all non-organic corn, soy, and cotton are GMOs, but this change has been associated with an increase in use of pesticides and herbicides. Many commercialized genetic modifications entail building pesticides into the plants, such as Bt varieties of corn, potato and cotton. Another modification involves inserting herbicide resistance, which allows for more herbicide to be used without killing the crops, such as in Roundup-Ready soy, canola, and corn. These types of modifications have the same pitfalls as other forms of pesticides. They cause damage to the soil, transfer into human bodies, and breed resistance in weeds, insects, and bacteria.

While some writers conclude that Indian farmers are committing mass suicide in response to GMO seed debt, others cite several studies that show Indian farmers who plant GMOs are improving their diet. One thing is clear: GMO pest and weed advantages are short-term and could leave farmers with few options when they run out. If we’re counting on a company like Monsanto to come to the rescue with a new product each time their last one stops being effective, farmers’ futures are in questionable hands.

There is good reason to distrust Monsanto. In addition to having a former Monsanto lawyer, Clarence Thomas, on the Supreme Court, and a former Vice President of Public Policy, as the deputy commissioner for foods at the FDA, there have been many former Monsanto people in positions of power within governmental food regulation. Monsanto and other big agriculture corporations have significant lobbying power, and this has made proper oversight impossible. Up against this type of money, even Californians didn’t have the resources to win a ballot referendum on a mere GMO-labeling law.

Monsanto produced much of the 20 million gallons of Agent Orange sprayed by the U.S. military in Vietnam, and has not taken care of the victims. Some of Monsanto’s dangerous pesticides, such as DDT and PCBs, have been banned, but nonetheless, these substances will remain in our environment and inside our bodies for generations. Monsanto’s rBGH increases the amount of milk a cow can produce, but makes cows sick. The benefits of these products are too short-term, the profits are too concentrated, and the risks are too great. We can look back now at these substances that Monsanto created, and say that they should never have been approved. Monsanto may well make more such mistakes in the future. Its policy has been to market new technologies without enough testing, making us all their guinea pigs.

When fourteen-year-old Rachel Parent was brought on to debate Canadian TV host Kevin O’Leary on the topic of labeling of GMOs, he repeatedly attacked her, calling her a lobbyist, a shill, and anti-science. His main argument was that her efforts would only impede GMOs that could save starving people. While it is true that there are some GMO products that could potentially save populations from starvation, there are also scenarios in which GMO side effects could cause starvation. For example, if pesticides are indeed destroying bee populations, and use of GMO crops is contributing to depletion of butterfly populations, all of the foods that depend on these pollinators are at risk. People all over the world are concerned about these risks, and have stopped trusting the promises of the Green Revolution to the point of ripping GMO field trials out of the ground.  However, at the same time, some long-time GMO critics and scientists have been changing their stances, joining Bill Gates in promoting GMOs to feed more poor people.

The overwhelming majority of GMO crops put into our environment have been of the problematic short term profit driven variety, placing herbicide resistance and pesticides into plant DNA. However, attempts to place bacteria resistance or nutrients into plant DNA are a different category of modification. Nutrient-enhanced GMO forms of rice and cassava could potentially help millions, and GMO oranges are an attempt to solve a specific problem. These can’t be written off simply because they use the same technology Monsanto has misused. It is important for us to acknowledge that genetic modifications are each unique, and present their own advantages and risks.


Even if GMO oranges are the best solution to this crisis, we should ask if factory farming is prone to these types of crises. Our lack of crop rotation, over-dependence on pesticides and herbicides, monoculture farming, asexual reproduction, and all the other practices that increase short-term yields, might soon put us in another crisis, and the solution may be more problematic than borrowing some spinach DNA.

The impediments to transitioning into balanced, sustainable systems are not scientific or agricultural — rather they are political. Our food and energy systems are corrupted by money, serving the few while putting everyone at risk. Corporate personhood shields executives from jail time for pollution and other crimes. Two-party controlled, corporate-funded elections give us politicians who appoint industry insiders as regulators. Consumers demand unsustainably grown foods. As long as these realities persist, we are headed for more and more crises, with increasingly elaborate, and increasingly temporary solutions.