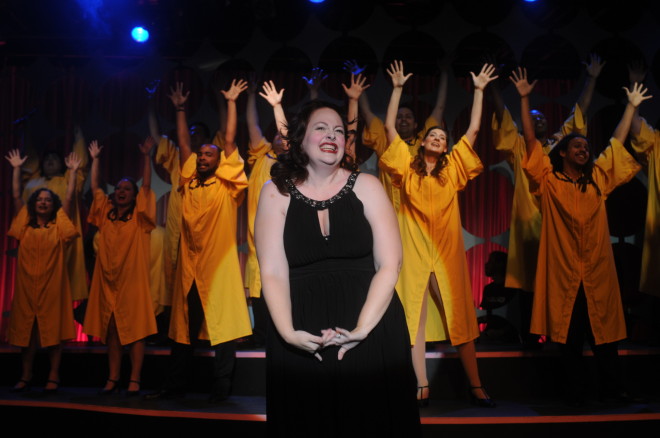 On July 12 of this year, Non-Italicized Tamarie Cooper (a name I have chosen to represent the interviewee and will henceforth be identified as “NITC”) released to the world her 16th original musical production. Along with writer/director Jason Nodler, NITC co-founded Houston’s Catastrophic Theatre in September of 2007. NITC is more than a seasoned professional of the theatre as she has been performing her entire life in nearly every capacity including, but not limited to, designer, writer, director, choreographer, actor, producer, sergeant major, greens keeper and Zamboni driver. Her most popular productions include: Tamarie Cooper’s Doomsday Revue, The Tamarie Cooper Show, The United States of Tamarie: An All-American Revue (Made in China), The Tamarie Cooper Show: Journey to the Center of My Brain (in 3-D!).

Where did you get the inspiration to humorously highlight your own age and industry? Is Tamarie Cooper’s OLD AS HELL something you’ve wanted to write for a while?

The idea for this theme came to me last year, actually, while hanging out with my writing partner, Patrick Reynolds. Every year, around this time in the run of my summer show, people start asking me what the next year’s show will be about. Patrick pointed out that we had already tackled broad topics like love, America, and the apocalypse, and that maybe we should do something about me getting old. I snapped back that I would only be 42. Of course, I then realized that 42 + 42 = 84, which is a pretty goal number and that statistically speaking, I am indeed “middle-aged.” My midlife crisis seemed like good material.

I suppose the italicized version is the caricature version of me. Red wig, jazz hands, a bit more daffiness, and more dick jokes. Wait … the dick jokes are present in both versions of myself.

Does non-italicized Tamarie write with the intention of continuing to develop and enhance Tamarie?  Or is Tamarie, as a character project, completed?

The Tamarie character continues to evolve/morph/expand just like the non-italicized Tamarie.

You’ve written 16 original musicals, all of which have been successes.  Where do you start writing usually — with the music or the plot?

I start with the “plot” as loose as it may be. Basically, I storyboard a bunch of ideas for musical numbers and scenes, toss it back and forth with my writing partner, Patrick, and then get him started fleshing out the book. I then meet with my composer and lyricists and get to work on the tunes.

Have you considered adapting one of your musicals for the silver screen?  Are there plans to write an original musical for the screen in the future?

No current plans for the screen, but I would certainly jump at the opportunity if it presented itself. Same goes for television. I love TV. I could easily see some of my most humiliating real-life moments presented in an HBO-type format like Girls. Although the singing and dancing would have to be handled well — don’t want to be another Cop Rock or Glee. (Note: I like mainstream TV and enjoyed the first season of Glee — after that it went south. There I said it. I’ve even been known to laugh at Everybody Loves Raymond)

In 2007, you co-founded The Catastrophic Theatre.  How does the success of that experience determine what projects and shows you choose to work on now?

Jason Nodler and I founded The Catastrophic Theatre in 2007, but we have been involved in each other’s lives since high school. We have experienced success and failure together, whether working on a play or running the local back in 1992. We don’t have specific rules for what types of plays we choose to direct or create, other than that they are plays about life on earth. I love the diversity in our programming: rock operas, crazy musicals, modern classics, original works by exciting playwrights like Miki Johnson, Mickle Maher, and Lisa D’Amour. Regarding my original work, Jason has always put great trust in my instincts and encourages me to run with whatever ideas bubble up every year. I also enjoy working on other Catastrophic productions, although I have limited my involvement as I am taking time to raise my daughter, Rose, who is three. I will be acting in Marie and Bruce by Wallace Shawn later this year, which is very exciting. Jason originally directed me in the role of Marie back in 1999.

True or False: Catastrophic Theatre’s artistic director, Jason Nodler, is the only thing standing in the way of you exclusively using wild animals in your next musical?

Completely false. The animals are standing in the way. Because I might eat them. Actually, I did try to use a dog once in my 1930s salute, Tamalalia 6. Unfortunately, it was a cast member’s ancient, deaf, blind, little poodle thingy. The poor thing was terrified and confused. It was one of the saddest things I have ever seen. Needless to say, the gag was cut.

Speaking of wild animals, how delightful is it working with Jessica Janes?

Jessica is awesome. She perfectly plays a young version of myself. And really, she’s not that wild — she’s got her shit together way more than I did at her age. She does, however, look great in animal prints.

Dig In: The Best of The Week